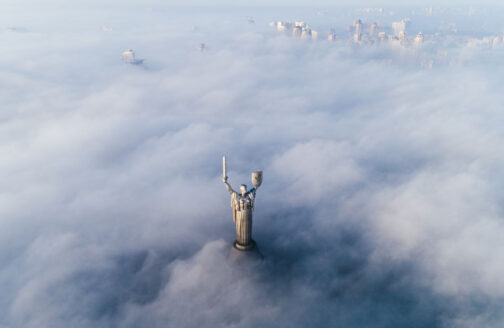 Ukrainians are weary of war. Seventy percent of them chose peace as their top wish for the new year, despite several other crises facing the country, like poverty and corruption. Such were the results of the most recent survey of its kind at the end of 2019. Much like it was during his successful campaign for president, peace in Ukraine was the centerpiece of Volodymyr Zelensky’s new year’s address to his fellow citizens.

But what would constitute peace in Ukraine?

Although the Minsk II agreement signed in February 2015 put an end to the bloodiest battles in Donbass and only seldom are sizable tank units and heavy artillery deployed in the area, the war is decidedly not over and continues to claim an immense human and financial toll.

Since 2014, more than 13,000 people have died in the crisis region, including almost 4,000 Ukrainian soldiers, most of whom were young recruits and volunteers. In 2019 alone, almost 100 members of the Ukrainian Army were slain in battle, while survivors have returned home with new cases of physical and psychological trauma.

Furthermore, the monetary burden has been enormous. In 2018, Petro Poroshenko revealed toLa Repubblica that Ukraine’s military commitments in the east of the country cost the government $5 million each day. The war zone comprises about one-third of Ukraine’s peacetime industrial output. Major factories and coal facilities are now in ruins; unemployment in the region has reached 60 percent.

More than one million internally displaced persons have had to abandon their homes due to military skirmishes, the ravages of war and an overall lack of prospects. It should come as little surprise that the overwhelming majority of Ukrainians place urgent priority on finding a swift end to the military conflict. However, it is not prepared to pay for peace at any price.

What will peace cost?

Any cession of territory to the benefit of another country or long-term territorial loss such as the establishment of a quasi “independent” entity not controlled by Kyiv would be unacceptable to the majority of Ukrainians. A survey from October 2019 revealed that almost three-quarters of those questioned will not even entertain the idea of ceding the territory of the self-proclaimed “republics.” That “Donbass will remain Ukrainian” also enjoys political consensus. Even the Russia-friendly parliamentary group Opposition Platform advocates for Ukrainian unity.

Furthermore, the Ukrainian population remains steadfast in its criticism of the idea of issuing a special status within the country for several regions of Eastern Ukraine. Fifty-six percent of those surveyed see Donetsk and Luhansk as part of a unified state under conditions similar to those before 2014. Only 13 percent could accept greater autonomy rights for Donbass.

For the broad spectrum of the political, financial and cultural elite, a special status for the unsettled region would be a nightmare, as it could mean noticeable political influence on the balance of powers and on blocking further ties to the West. A federal ordinance to affix a special status to the region, which a few years ago was still a subject of public debate, is now considered to be on equal terms with separatism.

The Ukrainian people are aware that an end to the war and the reintegration of the – in official jargon – “various districts in the regions of Donetsk and Luhansk with special autonomy” requires compromise. But the willingness to broker one is limited. Renouncing a possible future membership in the EU and NATO, recognizing Russian as a second official language, terminating the association agreement with Brussels and granting amnesty to all separatists – are all nonstarters. More than half of those surveyed refuse to work toward this goal while the violence continues.

Seventy-two percent of respondents consider the conflict in Donbass to be nothing short of war with Russia. After all, Moscow is backing the autonomy of renegade Ukrainian regions and will not relinquish its hold on this strategic lever of power without a fight. But the majority of Ukrainians fears the expansion of Russia’s sphere of influence. It wants to reintegrate Donbass without changing the political status quo across the entire country; Ukraine’s policymakers share this desire.

France and Germany, the other two parties of the Normandy Format, are evidently not prepared to ramp up their efforts – a stance that was made patently clear at the group’s most recent meeting in Paris. In other words, the guns have little chance of falling silent for any significant period of time in the foreseeable future. Even partial successes such as the latest prisoner swap do little to change this grim truth.

DMITRI STRATIEVSKI
is vice chairman of the Osteuropa-Zentrum in Berlin. 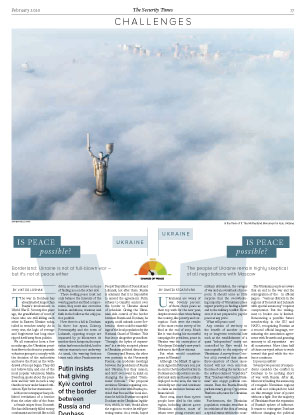