Thomas Mücke received the photos via WhatsApp. There’s one of a groom standing next to his bride, beaming with joy and laughter. Another is of a young man so unabashedly proud of the work uniform he’s wearing that he looks as if he’s being featured in an ad poster for his employer. Mücke, a social worker with a degree in education, is always delighted to look at these and other photos. They show a great deal of harmony and joie de vivre. And, above all, they are proof that his work has been successful.

But Mücke doesn’t provide any details on the individuals in the photos – no names, anyway. He won’t even reveal exactly what kind of work uniform the young man is wearing. Mücke doesn’t want any information about the men to be known, at least not publicly. One thing is for certain, though; the young man is definitely not wearing a police uniform. How do we know? Because the police force in Germany doesn’t accept anyone who was previously a member of the Islamic State (IS).

The photos sent to Mücke show men celebrating moments of happiness in Germany. Only a couple of years earlier, however, these same men – each of whom has a German passport – were wearing black uniforms with black scarves over their faces.

Today, the men are back in Germany, and Mücke and his colleagues are there to ensure their re-integration into society. Mücke is managing director of Violence Prevention Network (VPN), an organization that works with former members of extremist groups. In fact, VPN is at the core of a network tackling a key question and challenge: How can we prevent German citizens who were once active as holy warriors for IS – and who have now returned to Germany – from returning to a life of radical thought and action?

The German government has an obligation under international law to take back its citizens. However, the government naturally does not want to face a permanent threat from these citizens at home.

Many former IS fighters came back willingly. The first group started returning to Germany in 2014, disillusioned by their experiences with the militant group. Others were retrieved from the camps where they’d been held and brought back to Germany.

After coming home, some of the men were simply released, as there was no warrant for their arrest. Many of those who had returned in the previous months landed almost immediately in pre-trial detention. The minimum charge they faced was “membership in a terrorist organization.”

In the five years since 2015, Mücke’s team has provided guidance to 40 former IS members imprisoned in Germany. Each offender is interviewed and subjected to a threat analysis. In other words, representatives of the police force, the Verfassungsschutz (Federal Office for the Protection of the Constitution), the justice system and VPN meet together and assess the threat posed by each former IS member.

As soon as any former IS warrior returns to Germany and is locked in prison, it won’t be long before they find a VPN employee standing at their cell door. “We offer an opportunity to talk,” says Mücke. “The earlier the better.” And his approach has been successful. “Out of all of the people we’ve visited in prison, not one of them refused our help.”

This first meeting marks the beginning of a process that involves a great deal of patience. “I would be very skeptical if a former extremist said that he regretted everything he did after just three days of talking,” says Mücke. It usually takes three or four months “until we see a development.” In that period of time, Mücke has noticed, the person’s thoughts become increasingly preoccupied with questions of right and wrong. “It’s essential that the person concerned recognizes that it’s up to him to take responsibility for his actions,” says Mücke.

Mücke and his colleagues also ask for help from the families of the returnees. Indeed, fathers, mothers and siblings can influence the men and encourage them to talk to VPN.

Things have worked well so far. And Mücke has also been lucky. The worst criminals – the murderers and the torturers, that is – are not yet in German custody. They have not yet been brought back from Syria and Iraq. In January, official statistics showed that there were still 124 individuals with a German passport living in IS camps – sometimes under catastrophic conditions.

Those former IS members currently in prison in Germany are not considered to be brutal or ideological hardliners. They’re usually able to generate an inner distance to their past very quickly. “A lot of them regret having taken part in something so terrible,” says Mücke. “Many say they simply turned a blind eye for a long time.” According to Mücke, several of these men set off to join IS after experiencing a brief social or personal crisis, not because they were fanatical Muslims.

Still, regret alone is not enough. When these men are released from custody, they remain under the constant watch of the police force, the Verfassungsschutz, probation officers and VPN. “We all follow very closely how each individual is developing,” says Mücke.

This is the next phase in monitoring and caring for these former IS fighters. It is essential that the men are not allowed to drift back into the extremist scene. What they need most at this point is a social and personal network as well as a support system. As many left school early, this is the perfect time to go back and complete a degree.

But what kind of educational institution would accept former extremists as students? “We work very hard to get teachers, students and parents on board,” says Mücke, whose many years of experience prompt him to take all concerns very seriously. This is exactly why things tend ultimately to work out. “Schools are willing to get involved in cases such as these because they know we monitor and take care of each ex-IS member with great attention,” says Mücke. In addition, if there are any problems, students, parents and teachers can contact VPN at any time.

In the case of older returnees, the goal is to have them pursue vocational training or get an actual job. VPN representatives accompany the men to the job center and help with job applications. The extremist past of these new employees always remains a secret. The boss is told nothing about it. This is one of the only ways for reintegration into society to succeed as best it can.

And Mücke has several success stories to tell. He knows many people who now live solid, middle-class lives. “Nobody would guess they used to be members of IS.” These are the men who call VPN staff to chat and send pictures of their weddings and vacations. The contact never really ends.

FRANK BACHNER
is a metro editor at the Berlin daily Der Tagesspiegel. 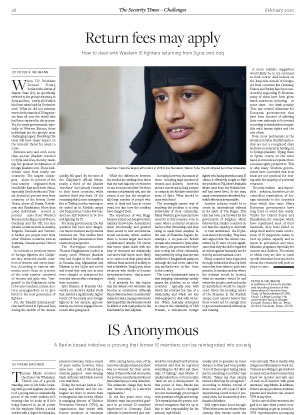