For the past four years, US and European policymakers have thrown up their hands in despair at their inability to influence the course of the war in Syria. Russia, Iran and Turkey, they complain, have relegated them to secondary roles. But the West’s failure to contain the conflicts in Libya since 2014 tells a different story.

Libya is not a theater of intense rivalry between major powers and regional heavyweights. Meddling by states such as the United Arab Emirates (UAE) and Egypt is not an inevitable consequence of the new multipolar disorder in the Middle East and North Africa. Rather, the United States and Europeans have stood by – and eventually joined in – as cavalier interference by minor powers turned Libya into a playing field without rules. The Libyan crisis continues to deepen, not least due to a stunning indifference among Western governments to the chaos on Europe’s doorstep.

In December 2015, Western states were the main backers of a fragile agreement to overcome the political divides plaguing Libyan factions and form a Government of National Accord (GNA). While that agreement had many flaws, the principal cause of its failure was the continued foreign support – from the UAE, Egypt and France – of the leading opponent of the deal, Khalifa Haftar, who now effectively controls eastern Libya. The GNA has survived in Tripoli largely thanks to its status as the internationally recognized government. Meanwhile, institutional divides have persisted and Haftar has advanced. Attempts to broker a deal that would include Haftar in a unified government have proven elusive.

However, it is important not to overstate the role of foreign actors in Libya’s conflicts, whose fundamental driver is an ever-evolving power struggle between the country’s innumerable factions. External actors did not push Libya into civil war; rather, Libyan conflict parties mobilized foreign support as the struggles escalated in 2014.

Haftar, in particular, has enjoyed substantial foreign backing. But most armed groups sustain themselves by tapping into Libya’s flourishing war economy, siphoning off state funds through a variety of licit and illicit schemes.

A look at the key foreign players in Libya tells us much about the extent and limits of external involvement. By far, the leading foreign meddler is the UAE, a small, faraway state that has little tangible interest in Libya and remains unaffected by the fallout of the Libyan crisis. Next comes Egypt, which is directly affected by instability in Libya and has a major stake in developments there but has long ceased to be a leading regional power. Libya is the only regional hotspot where Egypt now plays a notable role.

The regional heavyweights Saudi Arabia and Iran have not displayed any interest in Libya. The UAE and Egypt accuse their regional foes – Qatar and Turkey – of backing “terrorists” in Libya, but evidence of Qatari or Turkish support to Libyan factions is scarce, and to the extent that it does exist, it pales in comparison to Emirati and Egyptian support for Haftar.

This is the extent of regional involvement. There is much talk of Russia, which has printed currency for the parallel central bank in eastern Libya, deployed military advisors with Haftar and simultaneously reached out to a range of other players in Libya. But there is much to suggest that Russian actions in Libya are first and foremost a cheap way of signaling that it can act as a spoiler if ignored. Russian support for Haftar only materialized after he had already emerged as a key player in the east, and after the onset of US and French counter-terrorism assistance to Haftar.

Among Western governments, Italy is by far the most active in Libya. This is unsurprising, as Italy is most directly affected, but also telling, as it underscores the absence of serious engagement by major powers. France has stood out for its erratic, short-lived diplomatic initiatives and modest military support to Haftar, pioneering the outreach of other Western states to the warlord in the east. The embarrassing diplomatic spats between France and Italy over Libya in the past year are not conflicts over substance; rather, they are a manifestation of the Elysée’s casual attitude towards Libya policy, and of populist rhetoric by Italian politicians.

US disengagement from anything other than counter-terrorism began under President Barack Obama – following the killing of the US ambassador in Benghazi in 2012 – and has accelerated under Trump. A defining moment came in July 2018, when the US, worried about rising oil prices as it prepared to impose new sanctions on Iran, successfully pressured the Emiratis and forced Haftar to lift his blockade on oil exports from ports under his control. The episode showed that the US could solve major problems in Libya if it cared – but it quite obviously does not.

Amid international indifference, Libya has become a place where anything goes. It is the only country on earth where, when an airstrike happens, the responsible party could be any of at least two local and four foreign governments – but in many cases, it will never be publicly identified.

The UAE was a forerunner in this regard when it bombed armed groups in Tripoli in 2014 – apparently without even informing the US. Since then, a number of airstrikes, believed to have been carried out by Egypt, have caused significant civilian casualties. As in other countries, US strikes against purported terrorists are also regularly followed by local allegations that the victims were innocent civilians; but contrary to such cases in Yemen or Pakistan, the international media has yet to investigate such claims in Libya.

The UN arms embargo offers another striking illustration. The UN Panel of Experts meticulously documents blatant violations of the embargo by regional, Eastern European and Western states – which the UN Security Council then carefully ignores. It has recently moved to impose targeted sanctions on selected Libyan “spoilers” – but these are, without exception, politically expendable losers. Powerful players with ties to foreign states can be certain of their impunity.

While not initially among the foreign actors who turned Libya into a free-for-all, the Europeans are now doing their share to keep it that way. The European approach to curbing migration from Libya’s shores, spearheaded by Italy, amounts to refoulement by proxy. Europeans are providing support to Libyan coastguard and interior ministry units that are themselves deeply involved in the economy of migrant extortion. For now, the European approach has been grimly successful in reducing migrant crossings, but at tremendous human cost – and by trampling international law and human rights.

For those who claim to defend a rules-based international order, Libya would be a good place to start. As a first step, this would require European governments to transcend their puzzling disinterest in the turmoil in their immediate neighborhood. Admittedly, there are few incentives to do so for leaders who are driven by short-term priorities. Libya seldom features in the media, who have trouble getting in and often find Libya’s complexity hard to communicate. Libya’s role as a transit country for migration –which all Europeans recognize as strategic – has moved to the background, as a result of short-sighted policies that undermine the overall objective of stabilizing Libya. And Libya’s conflicts are hardly tempting for European leaders with prospects of quick wins that would allow them to shine in domestic politics. But if Europeans want to help solve a crisis that directly affects them – and prevent others from deepening it further – they need to be much more strategic, assertive and united.

WOLFRAM LACHER
is a senior associate in the Middle East and Africa division at the German Institute for International and Security Affairs (SWP). 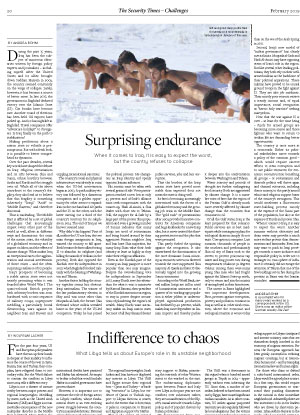