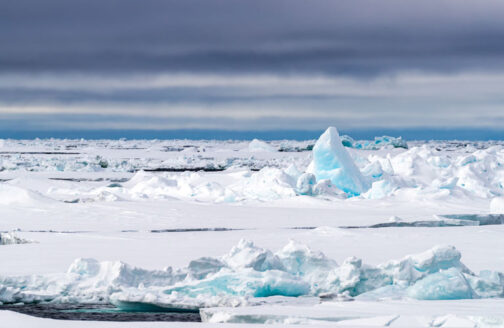 Few places have been the source of as much speculation, hype and broad statements as the Arctic at the start of the 21st century. Propelled onto the agenda by flag-plantings and resource appraisals, the Arctic has continued to lure researchers and journalists to venture northward to the next great game.

Fortunately, with more attention comes more knowledge as well. Reputable scholars have now debunked the notion of “resource wars” taking place in the north; after all, the UN Convention on the Law of the Sea has already granted the Arctic states ownership over most of these areas. The Arctic is not suffering a state of anarchy; states cannot claim rights to resources merely by planting flags at the bottom of the sea. The rights and duties of states concerning the Arctic Ocean are well documented by international law.

Nevertheless, prognostications of Arctic conflict and great-power rivalry over the North Pole keep dominating headlines. Why is this so, if all is well up north?

It is useful to distinguish between the international – systemic – level, and the regional – Arctic – level. Using such an approach, we can tease out the dynamics present in the Arctic and find out why the idea of conflict persists, and how it does not run counter to the ideas of regional cooperation and stability. Separating the international level from the regional level can help clarify misconceptions about the Arctic and the interests of the actors involved.

During the Cold War, the Arctic held a prominent spot in the political and military standoffs between the two superpowers, the US and the USSR. It was important not because of interactions in the Arctic itself, but because of its strategic role in the systemic competition between the US and the USSR. And now, after a drop in geopolitical and geostrategic relevance in the 1990s – which enabled various regional cooperative schemes to be established in the Arctic – the polar region’s strategic importance has grown again.

The renewed strategic importance of the Arctic has evolved primarily because Russia is intent on re-establishing its military power – and sees the Arctic as one domain where it can do just that. Its Northern Fleet is based on the Kola Peninsula, which houses strategic submarines essential to the state’s status as a nuclear power on the world stage. It is not the melting of the sea ice that has spurred this military emphasis on the Arctic – it is the importance of the Arctic for Moscow’s more general and global strategic plans and ambitions.

Moreover, China has now emerged as an Arctic actor. With Beijing continuing to assert a greater influence on the global stage, the Arctic is one of many regions where China’s presence is a component of its great-power politics. China has labeled itself a “near-Arctic state.” Despite the inaccuracies of US Secretary of State Mike Pompeo’s warning in 2019 that Beijing’s Arctic activities risk creating a “new South China Sea,” such statements highlight how the US views the Arctic as yet another arena where the emerging systemic competition between the two powers is becoming sharper.

The US can and will engage in the Arctic, which is an important location for missile defense capabilities, surveillance infrastructure and a limited number of strategic forces.

It is futile, however, to generalize about security interests and challenges across the whole northern circumpolar region. It is more sensible to discuss security in specific parts of the Arctic, not in the Arctic as a whole. Of these different segments, the European Arctic is undoubtedly the most challenging. But there is not only confrontation in the region.

In fact, intra-regional cooperation on several issues has flourished. In 2008, in response to concerns about the lack of governance in the Arctic, the five Arctic coastal states – Canada, Denmark, Norway, Russia and the US – met in Ilulissat, Greenland, and declared the Arctic “a region of cooperation.” They affirmed their intention to work within established international arrangements, particularly the Law of the Sea regime. Since the Ilulissat meeting, all Arctic states have repeated the mantra of cooperation and articulated it in relatively streamlined Arctic policy and strategy documents. The deterioration since 2014 in Russia’s relations with the other Arctic states has done little to change the situation.

The emergence of the Arctic Council in 1996 as the primary forum for regional affairs in the Arctic is worth noting. An increasing number of actors have applied to the Council for observer status, including China, India and the EU.

The Arctic states have shown their clear preference for a stable political environment that allows them to maintain dominance in the region. The importance accorded to the Law of the Sea and issue-specific agreements signed under the auspices of the Arctic Council ensure that Arctic countries in particular as well as ensure that Arctic issues are generally dealt with by the Arctic states themselves.

On the international level, the Arctic has again risen to the forefront of strategic concerns among great powers (the US, Russia, China). This has little to do with events actually in the Arctic (ice-melt, economic ventures, etc.) and everything to do with the strategic importance of the Arctic for these actors. The Arctic states have no rationale for engaging in outright conflict over resources or territory – although local rivalries have persisted, like that between Norway and Russia. Yet the Arctic will not become any less important on the strategic level. The rise of the Arctic on the agenda is no passing trend. Geopolitics has re-entered the Arctic and is there to stay.

are senior research fellows at the Fridtjof Nansen Institute in Norway. 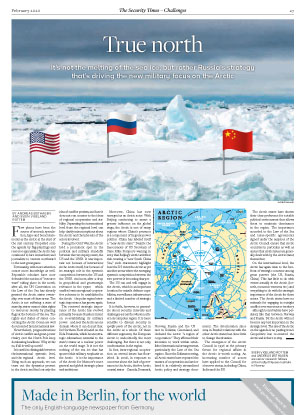