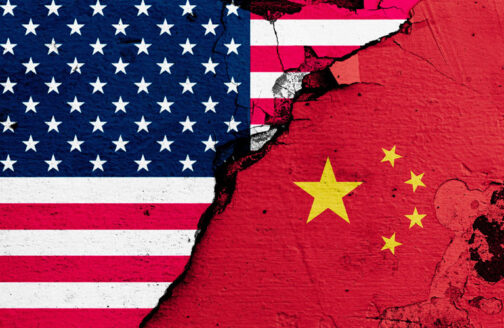 Will China succeed in what some call its grand strategy of displacing American power? Whichever scenario emerges also depends on the strategy the US chooses in response.

Many Chinese elites saw the Great Recession of 2008 as a sign of American decline. Leaders abandoned Deng Xiaoping’s strategy of hiding capacity and biding their time and became more assertive in ways ranging from building artificial islands in the South China Sea to economic coercion of Australia to abrogating guarantees to Hong Kong. On the trade front, China tilted the playing field with subsidies to state-owned enterprises, coercive intellectual property transfer and cyber theft. Donald Trump responded clumsily with a tariff war that included penalties on allies as well as on China, but he was correct to defend against companies like Huawei, whose plans to build 5G telecommunications networks pose a security threat. Some people in Washington began to talk about a general “decoupling” and a “new Cold War,” but it is mistaken to think the US can completely decouple its economy from China without enormous economic costs.

All historical metaphors are imperfect. While the Cold War metaphor can help mobilize publics for a prolonged competition, it can also mislead policy makers about the nature of the strategic challenge China poses. In the real Cold War, the Soviet Union was a direct military and ideological threat, and there was almost no economic or social interdependence in the relationship. Containment was a feasible objective. With China today, the US has half a trillion dollars in trade and millions of social interchanges. Moreover, with its “market-Leninist” political system, China has learned how to harness the creativity of markets to authoritarian Communist party control in a way the Soviets never mastered. China cannot be contained in the same manner as the relatively weak Soviet economy. More countries have China as their major trade partner than they do the US. While many countries welcome an US security guarantee against Chinese military domination, they are not willing to curtail their economic relations with China as Cold War allies did with the Soviet Union.

With the Soviets, the US was involved in a regular two-dimensional chess game in which there was high interdependence in the military sphere but not in economic or transnational relations. With China, the US is involved in a three-dimensional game with different power distribution at each level. At the military level, the world is still unipolar and the US is the only military power with full global reach. However, at the economic level, the distribution of power is multipolar with US, China, Europe and Japan as major players. On the transnational board of interdependent networks that are outside the control of governments (such as climate and pandemics), power is chaotically distributed and no one country is in control.

If the US downplays the power relations on the economic or transnational levels and the vertical interactions among the boards, it will suffer. If one plays only two-dimensional chess in a three-dimensional game, one will lose. A good strategy for China must encompass all three dimensions of the interdependence, and the Cold War metaphor is too focused on the traditional two-dimensional model. The strategic challenge China poses is a hybrid system of economic and political interdependence that it can manipulate to support authoritarian governments and to influence opinion in democracies to prevent criticism of China – witness its economic punishment of Norway, South Korea and Australia as well as private companies and organizations.

Moreover, with regard to the ecological aspects of interdependence such as climate change and pandemics, the laws of physics and biology make decoupling impossible. No country can solve these transnational problems alone. The politics of global interdependence involves power with others as well as over others. For better and worse, the US is locked in a “cooperative rivalry” with China in which it needs a strategy that can accomplish two contradictory things at the same time. This is not like Cold War containment.

Meeting the China challenge will require a more complex strategy that leverages US hard and soft power resources to defend and strengthen a favorable rules-based system. Some pessimists look at China’s population size and economic growth rates and believe that the task is impossible. But allies are assets. The combined wealth of the allied Western democracies – North America, Europe, Japan, Australia – will far exceed that of China and Russia combined well into this century. China has few allies. While Russia and China have a diplomatic alliance of convenience, Russia cannot solve China’s balance of power deficit. Of course, America’s allies do not all see China in exactly the same way the US does. Rhetoric about a new Cold War may have more negative than positive effects in the maintenance of those key alliances. A metaphor that may be useful for recruiting domestic political support at home can be counterproductive as a strategy overseas.

Since no single future exists, good strategy must allow for multiple scenarios, and set feasible objectives. Rather than planning for maximal outcomes beyond our reach and a theory of victory involving regime change, the objective should be competitive coexistence within a favorable rules-based system. As former Australian prime minister Kevin Rudd has argued, the objective for great power competition with China is not defeat or total victory over an existential threat, but prevailing in a “managed competition.” A “hot war” between the two would represent a calamitous strategic failure. A sound strategy avoids demonization of China and instead sees the relationship as a “cooperative rivalry” or “competitive coexistence” with equal attention to both parts of the description.

A good strategy also requires careful net assessment. Underestimation breeds complacency, while overestimation creates fear – either of which can lead to miscalculation. China has become the second largest national economy in the world (measured by exchange rates) and may surpass the US in terms of GDP in the coming decade. But even if it does, China’s per capita income remains less than a quarter that of the US, and it faces a number of economic, demographic and political problems. Its labor force peaked in 2015, its total factor productivity rate is low, its economic growth rate is slowing, and it has few political allies. If North America, Japan and Europe coordinate their policies, they will still represent the largest part of the world economy and will have the capacity to organize a rules-based international order that can help shape Chinese behavior. That alliance is the heart of a strategy to manage the rise of China.

Moreover, for all its many problems, the US has some long-term power advantages that will persist regardless of current Chinese actions. One is geography. The US is surrounded by oceans and friendly neighbors. China has borders with fourteen countries and has territorial disputes with India, Japan and Vietnam that set limits on its soft power. Energy is another American advantage. A decade ago, the US seemed hopelessly dependent on imported energy. Now the shale revolution has transformed it from importer to exporter, while China depends on oil imports across the Indian Ocean, where the US and India have a dominant naval presence.

The US also enjoys financial power derived from its large transnational financial institutions as well as the role of the dollar. Of the foreign reserves held by the world’s governments, just a few percent are in yuan, compared with 64 percent in dollars. While China aspires to a larger role in digital payments, a credible reserve currency, whether digital or not, depends on currency convertibility, deep capital markets, honest government and the rule of law – all of which are lacking in China and cannot be quickly developed. While China could divest its large holdings of dollars, such action would risk damaging its own economy as much as that of the US. Although American overuse of financial sanctions creates incentives for countries to look for other financial instruments, the yuan is unlikely to displace the dollar until China develops deep and flexible capital markets and a rule of law.

The US also has demographic advantages. It is the only major developed country that is currently projected to hold its place (third) in the demographic ranking of countries. While the rate of growth has slowed in recent years, the US is not shrinking in population as is projected for China, Russia, Europe and Japan. Seven of the world’s fifteen largest economies will face a shrinking workforce over the next decade and a half, but the US workforce is likely to increase while China’s will decline.

America has also been at the forefront in the development of key technologies (bio, nano, info) that are central to this century’s economic growth. China aspires to lead “the 4th Industrial Revolution”; its government is investing heavily in research and development, and it competes well in some fields now. Given the importance of machine learning as a general-purpose technology, China’s gains in artificial intelligence are of particular significance. However, a successful US response to China’s technological challenge will depend upon progress at home more than upon external sanctions, and a 2017 ranking by Shanghai Jiao Tong University showed that sixteen of the top twenty global research universities were in the US; none were in China.

In other words, the US holds high cards in its poker hand, but the cards must be played skillfully. Discarding the high cards of alliances and international institutions would be a serious blunder. Another possible mistake would be to try to cut off all immigration. When I once asked former Singapore Prime Minister Lee Kuan Yew why he did not think China would achieve its goal of displacing the US, he cited the ability of America to draw upon the talents of the whole world and recombine them in diversity and creativity, and that was not possible for China’s ethnic Han nationalism. But if the US were to discard its high cards of external alliances and domestic openness, the odds would change.

The Keys to Success

A successful American strategy starts at home and must be based on (1) preserving the democratic institutions that are the basis of its ability to attract rather than to coerce allies; (2) a plan for investing in research and development that maintains US technological advantages; (3) maintaining openness to the world rather than retreating behind a curtain of fear. The US must not neglect its soft power to attract others. The US should (4) restructure legacy military forces to adapt to technological change; (5) strengthen alliance structures including NATO, Japan, Australia and Korea; (6) enhance relations with India; (7) strengthen participation in and supplement the existing set of international institutions that set standards and manage interdependence; and (8) cooperate with China where possible on issues of transnational interdependence.

In the near term, given the rising nationalism and assertive policies of the Xi government, the US will probably have to spend more time on the rivalry side of the equation, but if it avoids ideological demonization and misleading Cold War analogies, and maintains its alliances, the US can succeed with a realistic “no regrets strategy.” In 1946, George Kennan correctly predicted it might take decades to succeed with the Soviet Union. The US cannot contain China in the same way, but it has the assets to shape the environment in which China rises or reaches a plateau. The US should avoid succumbing to fear or belief in its decline. If the US-China relationship were a card game, the US has been dealt a good hand, but even a good hand can lose if played poorly.

Joseph S. Nye, Jr. is a professor at Harvard University and author most recently of Do Morals Matter? Presidents and Foreign Policy from FDR to Trump. 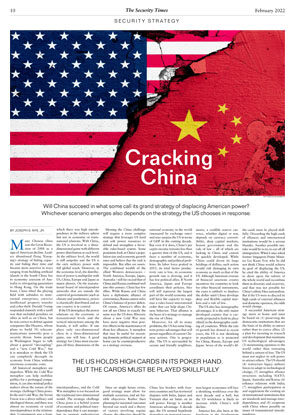