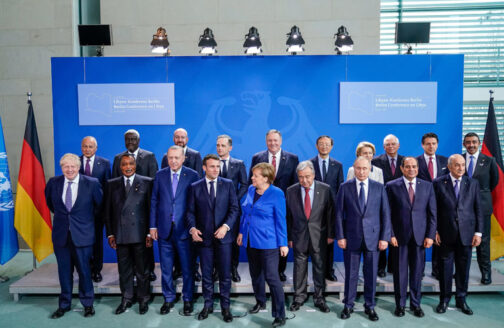 The complexity of the conflict raging in Libya has long been well known. Yet the underpinnings of a tenable process that could stabilize if not reverse the country’s downward spiral since 2011 are also well known – among the country’s small pool of experts, diplomacy professionals and by the UN Special Representative Ghassan Salamé.

The general framework of such a process is apparent in Salamé’s consistent proposals, beginning with his first action plan in 2017. The oft-cited tale of how each of these proposals was sabotaged – by states who claim to support his work – before they could even be implemented explains why peace is unlikely to return to Libya anytime soon.

Libya’s geostrategic location at the heart of both the Mediterranean and the Arab world, its hydrocarbon wealth and immense economic potential have lured many opportunists to meddle in its politics. The craven nature of Libya’s political class and its sustained search for foreign support opened the doors to foreign influence from Qatar and the United Arab Emirates as early as 2011. That is when the proxy war in Libya began.

The forceful attempt by the UAE, along with Egypt and France, to push the would-be strongman Khalifa Haftar into a position of de facto power has defined Libya’s past five years – even as several other European states attempted to create power-sharing deals and a unity government. Yet Haftar himself got mired in an increasingly internecine war with little hope of a clean victory.

Libya’s immediate neighbors could be destabilized if the country continues to burn. Europe, too, has found itself increasingly vulnerable to Libya’s destabilization. The migration crisis is only temporarily contained. Moreover, the lawless and hostile environment of war continues to be an incubator for jihadism while Libyan counter-terror forces remain distracted with their battles against one another.

More recently, the prolonged state of civil war has drawn Turkey and Russia into the region in a way that uniquely threatens Europe.

While Turkey responded to an official request for security assistance by the embattled government in Tripoli, President Putin decided to back Haftar. Russia has become an increasingly crucial part of the general’s war effort.

The formation of zones of Russian and Turkish influence in Libya poses threats to European energy interests. Turkey’s grabbing of the East Mediterranean gas fields has made headlines, but the possibility that Russia adds the Greenstream pipeline – exporting Libyan gas to Italy – to its growing collection of gas channels into Europe should perhaps be the cause of greater concern.

All the while, the United States has been noticeable for its absence. Having long held the position that Libya is Europe’s responsibility, the US is unwilling to get embroiled in a new Middle East adventure where its allies are fighting one another through proxies. If Europe wants to make peace more likely, it will have to take action before it is entirely frozen out by rival powers.

As Salamé himself has said, the international nature of the conflict demands an international solution. This means having a state, or coalition of states, willing to play the role of referee and provide the UN the space it needs to proceed with policies that prioritize Libya’s stability.

At the Libya conference held by the German government in Berlin in January, 16 states and international organizations attempted to unify international support for a political solution of the Libyan crisis. “There can be no military solution in Libya,” they declared. “Only a Libyan-led Libyan-owned political process can end the conflict and bring lasting peace.” They called for a sustained cease-fire; for observing the arms embargo, the cessation of financing military capabilities and of recruiting mercenaries; respect for international humanitarian law and human rights. A 5+5 Military Committee – five representatives each for Prime Minister Fayez Sarraj and Marshal Khalifa Haftar – was installed for substantial and serious talks.

Unfortunately, neither the arms embargo nor the cease-fire have been upheld since the Berlin conference. The two Libyan parties started their negotiations in Geneva, but a lasting truce is not yet in the offing, let alone a durable peace.

Yet peace in Libya is possible, provided that outside powers pursuing their own national interests agree to stop interfering. The likelihood of that happening is now directly tied to Europe’s willingness to establish order in its southern neighborhood.

TAREK MEGERISI
is a policy fellow with the North Africa and Middle East program at the European Council on Foreign Relations.

As long as civil war in Syria continues, neither Israel nor Iran can have an interest in escalating the conflict between their two countries. And yet, the conflict has already taken on a sinister tone 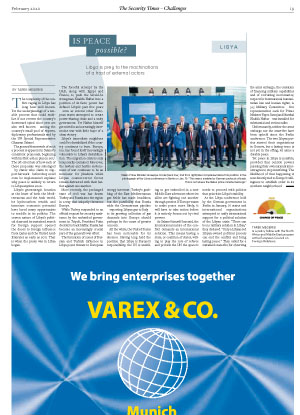