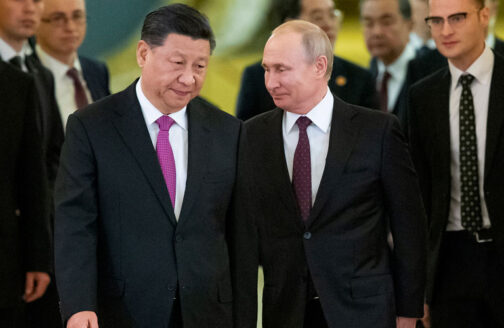 China and Russia have formalized their alliance against the West.

The 2022 Winter Olympic Games in Beijing will not go down in history as an exhilarating event; with just a smattering of snow and no spectators, they turned out a rather macabre affair. But when the history of international affairs in our century is written, the 38th meeting of Chinese President Xi Jinping and Russian President Vladimir Putin, at a working lunch before the opening of the Games, is certain to be accorded outsized importance. It cemented the relationship between the two leading authoritarians of our time, upgrading it to an ominous quasi-alliance.

The two presidents released a 17-page, 5300-word “Joint Statement on the International Relations Entering a New Era.” It has found only scant notice in the press, but it highlights a tectonic shift in global geopolitics that poses a severe challenge to the West.

China and Russia, presenting themselves as “world powers with rich cultural and historical heritage” and “long-standing traditions of democracy,” make no bones about their aim: a “transformation of the global governance architecture and world order” and the “redistribution of power in the world.” Xi and Putin underscore that their “new interstate relations… are superior to political and military alliances of the Cold War era. Friendship between the two states has no limits, there are no forbidden areas of cooperation.” In this context, particular mention is made of “strengthening bilateral strategic cooperation,” which portends a de facto security alliance. Joint naval drills and deepened collaboration on nuclear and space technology may only be the beginning.

As Frederic Kempe has noted, Russia and China are throwing in their lot with one another in an unprecedented manner, in each other’s regions and around the world. Russia reaffirms its support for the One-China principle and its opposition to any form of Taiwanese independence; China in turn promises to stand against outside forces attempting to undermine security and stability in Russia’s near abroad. China opposes NATO enlargement and declares that it “is sympathetic to and supports the proposals put forward by the Russian Federation to create long-term legally binding security guarantees in Europe.” Russia registers its opposition to the AUKUS defense pact between Australia, UK and the US and other closed bloc structures and opposing camps in the Asia-Pacific region. Moscow applauds Xi Jinping’s concept of constructing a common destiny for mankind, while Beijing returns the favor by undergirding Putin’s purported efforts to establish a just and multipolar system of international relations.

Surprisingly, the Joint Statement bears no mention of Ukraine. China has never officially recognized Putin’s annexation of the Crimea; it has chosen to abstain from voting for key UN Security Council resolutions regarding the dispute. In keeping with its obsession over territorial integrity – with Uighur and Tibetan separatism in mind – it disapproves of any secession as a matter of principle. But Xi is keeping a close eye on how the West would react to a minor or full-fledged Russian invasion of Ukraine. As the Economist put it, Xi might conclude he can safely invade the self-ruled island of Taiwan if he finds Joe Biden’s resolve in any way wanting.

Dialogue, coordination and cooperation in many fields are designed to bolster the new state of Russian-Chinese relations. Dealing with climate change, artificial intelligence, development of the Arctic and fighting the Covid-19 pandemic are some of the domains they have in mind. They also plan to raise the volume of trade from last year’s meager $140 billion to $250 billion. To this end, they intend to link their economies through closer collaboration between Xi’s Belt and Road Initiative and Putin’s Eurasian Economic Union.

Putin and Xi characterize their countries’ relationship as “the best it has ever been.” This is an accurate description. While there are certainly limits to their profusely promulgated entente, wide economic disparities and vexatious, lingering historical memories, they are currently buried under a new narrative – the intention, as the Joint Statement puts it, is “to strengthen foreign policy coordination, pursue true multilateralism, strengthen cooperation on multilateral platforms, defend common interests, support the international and regional balance of power, and improve global governance.”

An increasingly assertive China and an ever more destabilizing Russia are ganging up on the West. The US and its partners are challenged all across the board. They will have to react to the deepening alignment between the Russian Federation and the People’s Republic of China – with resolve but without obsessive bellicosity. A judicious Western pushback is the best way to thwart an obnoxious Chinese-Russian push forward. Yet fastening our seatbelts for a rocky road ahead is most certainly a wise move. 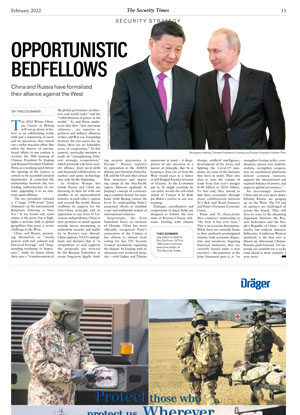