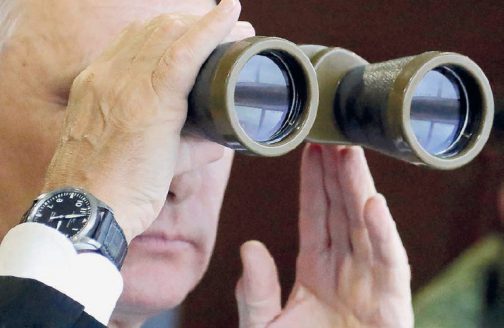 General Curtis LeMay, chief of staff of the United States Air Force in the early 1960s, once interrupted one of his officers who described the Soviet Union as an enemy. The USSR, LeMay said, was not an enemy, but an adversary. The enemy was the US Navy, the general clarified, referring to the bitter and never-ending rivalry among the US military services.

Definitions matter. Today, Russia is variously and officially described in the United States as a competitor, rival or adversary – but not yet the enemy, a title implying war. Three of the US Government’s guiding documents – the National Security Strategy, the National Defense Strategy and the Nuclear Posture Review – adopted in the last six weeks point to great-power rivalry as a salient feature of the global geopolitical and security landscape. While Russia is no longer America’s principal challenger – that title has gone to China – it is considered to be the main disruptor of the liberal world order designed, led and policed by Washington.

As such, Russia poses a definite political threat to US global dominance, and that threat is not hollow. Moscow’s actions in Georgia in 2008 and again in Ukraine in 2014 have effectively stopped the heretofore open-ended enlargement of NATO to the east. The Russian military intervention in Syria in 2015 prevented the ouster of Bashar al-Assad at the hands of the US-backed opposition. Moscow has entered into a situational alliance with Tehran; it has its own views and policies on Afghanistan and North Korea; and it is friends with Venezuela’s current government. At the United Nations, Russia is not shy to use its veto power. It also works closely with China, often at cross-purposes with the United States. The Sino-Russian “entente” effectively limits the global writ of the United States and its allies.

However, it would be quite a stretch to claim that Russia has the power to do much political disruption within Western countries. While RT and Sputnik were hardly friendly to Hillary Clinton’s 2016 presidential campaign, their activities, alongside those of any number of suspected Russian hackers and their partners, were not more than a drop in the ocean. Indeed, blaming Russia for all sorts of recent disappointments, including the Brexit vote and the strong electoral performance of some of non-systemic parties in Europe, from Germany’s AfD to the Austrian FPÖ to France’s Front National, works to downplay the failures of the ruling elites in various countries to respond to the fast-moving changes in their own societies. The same is also true of separatist movements, from Scotland to Catalonia to Corsica.

To be sure, Russia seeks to exploit divisions in the West to its advantage, and this is nowhere clearer than in the information sphere. With the mainstream media almost completely dominating the public debate in Europe and North America, Russian government-funded outlets have turned themselves into purveyors par excellence of Western-originated dissent and even fringe analysis and views. In doing so, Russians are aiming to do to the West something akin to what the Voice of America or Deutsche Welle did to the Soviet Union during the Cold War: promote local alternatives to not only official government policies, but the established political narratives as well. This is an undeniable irritant, yet Russia is hardly the creator of the divisions it tries to fan.

In economic terms, Russia, a medium-sized economy in relation to GDP, is more on the receiving end. It must bear the brunt of the Western sanctions imposed in the wake of the Ukraine crisis. The message the sanctions are sending to the entire world is stark: those who wish to do business with Russia will have to deal with the United States. Russia’s own counter-sanctions against the West have hurt a few European economies, but the damage they have felt has been far less than critical. Under the current circumstances, Russia would have been insane to use its “energy weapon” against Gazprom’s clients in Europe, and since 2014 there have been no temporary interruptions of Russian gas supplies to Europe. Rather, it is busy laying new pipelines, such as Nord Stream 2 and Turkish Stream. Ukraine’s refusal to buy gas directly from Russia has also helped by precluding any potential squabbling over gas prices, non-payment under existing contracts or theft of transit gas designated for EU countries.

Over the past ten years, Russia has reconstituted its recently much-dilapidated military. Its defense modernization has resulted in a better-equipped, better-trained and better-led force capable of serving as a policy instrument. The Crimea operation, the military support given to the rebels in Donbass and the Syria campaign are testament to both the new capabilities of the Russian Armed Forces and the Kremlin’s willingness to use those capabilities to achieve geopolitical objectives. The modernization program, begun in 2010, is still incomplete. However, it has already transformed the Russian military and revitalized the country’s defense industry, which was only recently considered moribund. Russia’s elevation, alongside China, as a major military rival of the United States is a badge of achievement for the country’s military.

The new confrontation between Russia and the United States has already resulted in the reemergence of a military standoff along Russia’s borders with NATO countries in Eastern Europe. The more strained strategic environment in the region can be seen in recent developments such as the deployment of the Iskander missiles in Kaliningrad and the emphasis on small-yield nuclear weapons in the US Nuclear Posture Review. In contrast to the Cold War, however, the danger of this confrontation lies less in the fundamental ideological antagonism between Moscow and Washington and more in the increased likelihood of incidents between Russian and NATO aircraft, an escalation of the unfrozen conflict in Donbass as well as proxy attacks and the asymmetrical responses they provoke in out-of-area locations such as Syria.

That said, the threat of a military collision is real enough and – to make matters worse – generally underappreciated. To keep Europe safe, it would behoove the West and Russia to take certain measures to minimize the risk of incidents involving their military forces: make sure there is a cease-fire worth the name in Donbass; restrain their proxies elsewhere, including in the Middle East; and establish reliable communication to avoid miscalculation.This is why the January visit to Washington of three Russian intelligence chiefs – of the FSB (Federal Security Service), SVR (Foreign Intelligence Service) and GRU (Military Intelligence Directorate) – was so important. Unlike in the 1990s, when such contacts were trumpeted as a sign of growing trust, the mission now is to avoid tragic miscalculation in an environment where there is no trust. Russia and the United States may be adversaries again, but they must not be allowed to become enemies. 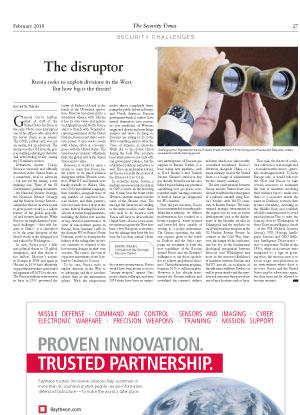