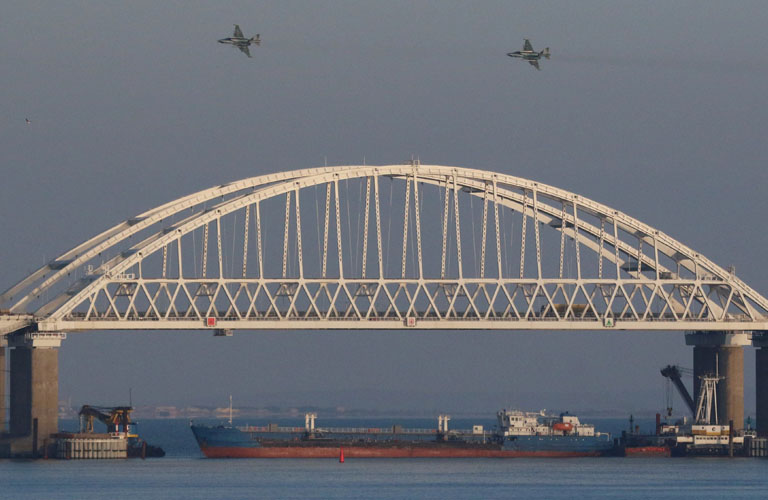 For the first ten months of 2018, the war in Ukraine continued to simmer without making front-page news abroad. Neither the Russianbacked separatists nor Ukrainian forces escalated the fighting beyond limited but often deadly violations of the Minsk II agreement along the Eastern Ukrainian frontline. The situation changed on Nov. 25, when Russian coast guard vessels attacked and seized three Ukrainian naval vessels, two small gunboats and a tug in the Black Sea, preventing them from transiting to the Sea of Azov via the Kerch Strait. It was the first direct clash between Russia and Ukraine since the onset of the crisis in 2014, when Russia sent soldiers without uniform markings to invade the peninsula of Crimea and occupy the Donbass region.

The Kerch Strait is located between the Russian mainland to the east and Crimea to the west. Russia and Ukraine share these waters under an international treaty signed in 2003. After Russia annexed Crimea, however, it appears to consider the strait its national waters and is restricting access from Ukraine’s eastern ports to the Black Sea. A new bridge across the Kerch Strait, which Russia opened in May 2018, was built too low for many larger Ukrainian ships to pass under. Furthermore, after the bridge’s inauguration, the Russian coast guard – a branch of the Federal Secret Service (FSB) – began illegitimate checks on merchant ships. This effectively strangled business at the ports of Mariupol and Berdyansk in the Sea of Azov, which have been major export points for coal and steel since Soviet times.

Russia’s attack in late November has raised tensions with Ukraine to a new high. Russian coast guard forces not only intercepted and blockaded the Ukrainian naval vessels; they also wounded several Ukrainian crew members. In total, Russian servicemen captured 24 Ukrainian sailors, who have been in custody since January 2019 and are being accused of illegal border crossing.

An investigation by Bellingcat, an independent group of internet researchers, confirmed the Ukrainian claim that the vessels were located in international waters of the Black Sea at the time of the attack. It is Ukraine’s word against Russia’s as to whether or not Ukraine followed advance notification procedures before attempting to transit the Kerch Strait.

During the summer months leading up to the incident, Russia reportedly expanded its military presence in the Sea of Azov to some 40 ships. In September, the Ukrainian government responded by announcing its intent to set up a new naval base in Berdyansk to “repel Russian aggression in the region.” This goal is ambitious given that the Ukrainian navy has been substantially weakened by the loss of a larger part of its fleet during the annexation of Crimea and that it has thus far received little support from Western partners.

Not surprisingly, Russian media and military experts criticized the Ukrainian announcement as a provocation and warned that the government in Kiev should not invite NATO member fleets for friendly visits in the Sea of Azov and the Black Sea – both important passages for Russia’s navy. Thus, the attack against the Ukrainian vessels can be interpreted as a warning shot to deter Ukraine’s leadership from opening its new naval base in Berdyansk.

The timing of the clash – four months before the presidential elections in Ukraine – suggests that the Russian leadership was looking for an opportunity to interfere in Ukraine’s political process. President Putin openly accused his Ukrainian counterpart, Petro Poroshenko, of provoking the incident in the Sea of Azov to boost his popularity, claiming “the war in Ukraine is not going to end – as long as the government in Kiev is in power.”

The fact remains, however, that the Ukrainian president cannot settle this conflict unless Russia acts first. Yet Putin has yet to make a credible attempt to end the fighting. An unstable and chaotic Ukraine serves his interests better than a pacified one.

President Poroshenko, who started as a white hope after the pro-European revolution on Maidan Square, has lost domestic support for delaying critical anticorruption reforms and keeping the old system of influential oligarchs intact. There is no doubt that Poroshenko is more likely to stay in power as long as the war continues. His decision to declare martial law for the first time since 2014 in reaction to Russia’s attack was thus heavily criticized in Ukraine as a political stunt and also helped fuel Russian rhetoric.

The Kremlin’s interference, however, will not increase the likelihood of another pro-Russian president in the upcoming elections in March, since a large majority of Ukrainians support independence from Russia in every possible way. The recent creation of a new Ukrainian Orthodox Church, which Poroshenko described as “tearing off the last chains that tied us to Moscow,” might also help him win back some support.

Russia’s aggression in the Black Sea also shows how little Putin worries about the possibility of a strong response from the West. The United States and Europe initially reacted with mere expressions of concern. Meanwhile, Washington offered a symbolic $10 million “to further build Ukraine’s naval capacities.” Germany and France pushed for an enlargement of the OSCE’s Observer Mission in Ukraine to include the Kerch Strait, but Russia rejected the plan. It remains unclear if Berlin and Paris will at least be able to send their own forces to monitor the area, since Russia and Ukraine would have to agree on the terms of such a mission.

The November incident has revived dormant theories regarding the potential of a Russian invasion along the coast of the Azov Sea in order to create a land bridge between Russia and Crimea, a plan that may seem obsolete since the completion of the Kerch bridge. While this particular scenario still appears unlikely, a further escalation of the conflict is not. Russia has tested the waters once more with this latest clash and learned that it can act with de facto impunity. It is highly improbable, though, that Russia would attempt further escalation prior to the Ukrainian elections, for it would encourage the country to unite behind Poroshenko with even more zeal.

ANN-DORIT BOY
was a correspondent in Ukraine for the Frankfurter Allgemeine Zeitung and the Neue Zürcher Zeitung. In 2016, she worked for the United Nations Office for the Coordination of Humanitarian Affairs (UN OCHA) in Kiev.

For a future without chains : African authoritarianism and Western intrusion are blocking the continent’s development 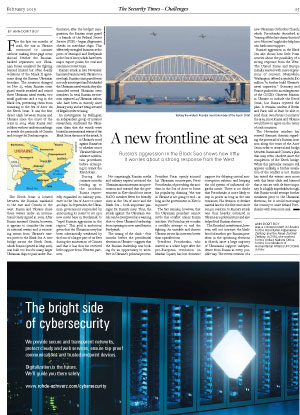