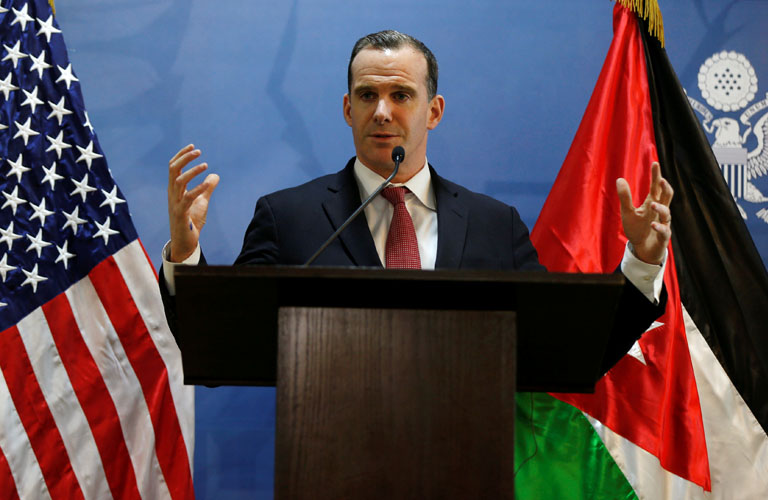 Shortly before the holidays, on Dec. 19, 2018, US President Donald Trump claimed victory over the Islamic State (IS) and ordered the withdrawal of 2,000 American troops from the northeast of Syria. Experts and observers mostly agreed that the true beneficiaries of this decision were Turkey on the one side and the current Syrian government and its allies Russia and Iran on the other. Additional winners include jihadi militants such as Hay’at Tahrir al-Sham, Hurras ad-Din and IS, which is far from being defeated everywhere.

To assess the impact of the withdrawal on the capabilities of IS, it is important to keep in mind that the organization has deep regional roots and longstanding experience in the field. Its history did not begin with territorial control, which was a later outcome of its successful strategy. It was founded in October 2004 as the Iraqi branch of Al Qaeda and in its first years grew in terms of numbers and activities. Within a short period of time, Al Qaeda in Iraq became one of the most feared and powerful militias in postwar Iraq. In January 2006, it declared the “Islamic State of Iraq,” an alliance of jihadist insurgent groups under its leadership. Over the next few years, the tide began to turn: IS leaders overestimated their power and pushed too hard. The organization became estranged from the local population, which grew more and more outraged by the religious strictness and rough behavior of IS members.

The US troops sent to Syria by President Barack Obama in 2015 were reinforced as part of the coalition against IS. They also recruited Sunni tribal militias for the fight against the Islamic State. Between 2008 and 2010, many IS fighters were either incarcerated or killed. Its leadership was decimated.

In 2010, the Pentagon believed it had killed or imprisoned 34 of the Islamic State’s most important 42 leaders and that only an estimated number of 700 fighters remained. For this reason, IS was no longer perceived as an existential threat. Only four years later, however, it rose like Phoenix from the ashes to conquer a wide swath of territory in Syria and Iraq, expanding its land reach far beyond its core regions. Important cities like Mosul in Iraq and Raqqa in Syria fell under IS control.

After Obama declared war on IS and formed an international alliance of 74 nations in September 2014, pressure on the jihadi militias increased. IS has since lost almost all of its territory in Syria and Iraq. Nonetheless, in September 2018, the US Department of Defense estimated the number of IS fighters in Iraq and Syria to be between 20,000 and 30,000 individuals, divided more or less equally between the two countries. Even if there were only 10,000 to 15,000 fighters, this would be a far larger number than the 700 reported in 2010. Furthermore, the financial situation of IS and its supply of weapons is far better than in its worst days in 2010. In both Syria and Iraq, IS is far from being defeated. It is still carrying out attacks against civilians and security forces.

Brett McGurk, then-special presidential envoy for the global coalition to defeat the group, warned a few days before the announcement of the withdrawal that IS is a “significantly degraded organization,” but that no one should be so naïve as to “just declare victory and walk away. We have to maintain pressure on these networks really for a period of years.” Two days after Trump’s statement declaring the US withdrawal and one day after US Defense Secretary James Mattis announced he would step down at the end of February, McGurk submitted his resignation. In his resignation letter, he underlined the importance of respecting allies, with a hint to the Kurdish forces that would be left in the lurch. The response of US allies to Trump’s decision was unanimously negative.

The withdrawal leaves the field wide open for the Syrian government, Russia and Iran as well as for Turkey. The hard-line rebel factions will extend their activities at the expense of the Kurds in northeast Syria. This will lead to more conflict on the ground and to more instability – a perfect setting for IS, which is waiting in the desert for a next chance.

The leaders of the Islamic State are experienced enough to know that time is on their side as they patiently work towards a comeback. The militants have gone underground and returned to their insurgent roots. For the moment, they are back in the hit-and-run business while attempting to rebuild their networks.

To make matters worse, just a day after announcing his decision on Syria, President Trump also ordered the withdrawal of half of the 14,000 US troops stationed in Afghanistan. Last year, Afghanistan witnessed a massive military campaign by the strengthened Taliban militia in various parts of the country. Although the Afghan government officially announced that it would be able to maintain security without US support, every observer of the developments knows that even now – with US boots on the ground – Afghanistan is far from being a peaceful and stable country. For the Taliban, the announcement is seen as the fulfillment of their long-declared prophecy of a US defeat in Afghanistan, especially as it comes before a deal with the Taliban is reached.

Both IS and the Taliban began as insurgent groups, not as regular armies. They have amply demonstrated their resilience when facing enormous military pressure. If this pressure lets up, it will be only a matter of time before we see them rise again.

BEHNAM SAID
worked as an intelligence analyst from 2008–2018. He has published several books and articles on the topic of jihadism and jihadist organizations such as Al Qaeda and the Islamic State. 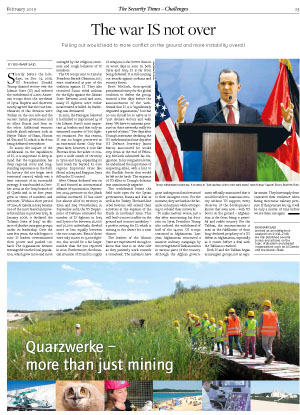