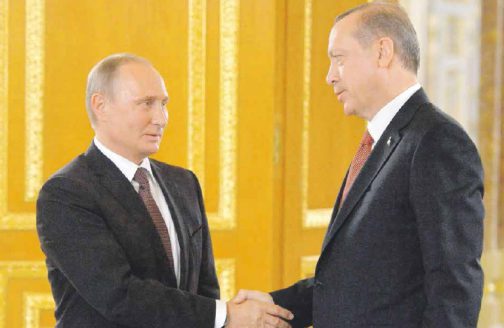 Just a few years ago, observers and commentators could barely contain their enthusiasm. Turkey was long regarded as the only Muslim democracy in the Middle East, a “model state” proving that a predominantly Islamic country could in fact develop into a democracy. Its unique geographical situation also made it a great advantage for Western governments, because Turkey, since the founding of the republic, had seen itself as anchored in the West and had always been a reliable partner for the West on issues of security and foreign policy. Turkey was at once a frontline state and a bridge to the East.

It may well be that this era is over. The Turkish government is poised to change its fundamental foreign policy positions with breathtaking speed.

Turkey’s ties with the West were expressed in its accession to NATO in 1952 and its loyalty during the Cold War, in its sending hundreds of thousands of “guest workers” to European countries, mainly to Germany, and finally in its desire to become an EU member. Atatürk, the founder of the Turkish Republic, had laid the foundations for the country’s Westernization: Always look to the West!

At the same time, he wanted to keep his Turkey “neutral,” putting an end to the “imperialist” and expansionist foreign policy of the defunct Ottoman Empire and protecting the young Turkish Republic from internal and external enemies. Atatürk, ever the pragmatic soldier, was not much interested in taking an active role in the world. “Peace at home, peace in the world” was his basic policy. Another consistent element in Turkey’s foreign policy has been its rejection of any kind of Kurdish state.

Recep Tayyip Erdoğan’s government initiated the first paradigm shift. In his early years as prime minister, the country seemed on the way to becoming a major power with hopes of exercising its influence in the region, although under a policy of “no problems with the neighbors.” This was a departure from Atatürk’s foreign policy, although not one that challenged the country’s links with the West. We are now seeing another, more extreme change in Turkish foreign policy, and it cannot be said with any certainty what it will mean for the country’s Western orientation.

The US and Turkey have traditionally been partners, but the tone between them has recently turned cooler and harder. One main contentious issue is their exceedingly different approach to Syria. The two countries are cooperating in the fight against the Islamic State (IS) and Turkey has opened its Incirlik air force base to American fighter jets. But the US government’s patent refusal to describe the YPG Syrian-Kurdish militia (the military arm of the PYD Syrian-Kurdish party) as a terrorist organization infuriates Ankara. The Americans see the militia as their most effective ground force, while Ankara more or less regards it as an extension of the Kurdistan Workers’ Party (PKK). The prospect of Syrian Kurds establishing an autonomous region in northern Syria, right on their border, is a nightmare for the Turks.

The PKK and PYD are in fact closely related. They have similar goals and revere the same heroes. The Americans are aware of this but are practicing realpolitik. No wonder pro-government media outlets regularly express anti- American sentiments. They may feel encouraged by statements made by Erdoğan, who has said that the US supports IS. Some writers have claimed that the US was behind the attack at Reina nightclub in Istanbul, planned the attempted coup on July 15, 2016 and wanted to murder the Turkish president with the help of followers of Fethullah Gülen.

For years Ankara has been calling for the extradition of Gülen, a Turkish cleric residing in Pennsylvania. The Turkish government believes that Gülen was the mastermind behind the coup attempt in July. The Obama administration never took a clear position on this demand. It is possible that relations will improve under US President Donald Trump, at least on the issue of Gülen. Before Trump took office in January, Michael Flynn, the president’s national security adviser, spoke in favor of extraditing Gülen.

Ankara’s relationship with the European Union is also tense. In their cooperation on the refugee agreement, the EU and the perpetual EU candidate were in some ways never so close, and in others never so far apart. Europe needs Turkey to stem the flow of refugees and migrants, yet for years it has treated the country like a poor cousin.

The Turkish government is poised to change its fundamental foreign policy positions with breathtaking speed.

The EU now finds itself in the awkward position of trying to draw closer to Turkey at a time when Erdoğan has begun restructuring the country into an authoritarian regime.

Turks regard the EU accession process as a tale of humiliation. In the mid-2000s, as Erdoğan’s reforms and modernizations were underway yet still unaccomplished, many Europeans slammed the door on Ankara, above all German Chancellor Angela Merkel, who kept him at arm’s length. A “privileged partnership” was the most she would concede, but by no means full membership.

Her attitude was far from helpful. Turkey has since lost interest in Europe, particularly after the European Parliament voted by a large majority last November to suspend accession negotiations due to burgeoning authoritarianism in Turkey. When the German Bundestag’s Armenia Resolution then used the word “genocide” to describe the massacre of Armenians during World War I, relations hit an all-time low. If Greece and Germany grant asylum to Turkish officers suspected of involvement in the coup attempt, the atmosphere can be expected to deteriorate further.

The estrangement between Turkey, Europe and the US has created a gap into which Russia has leapt with great tactical skill. Traditionally, the two countries have tended to have bad relations. Between the 16th and 20th centuries they went to war against each other more than a dozen times, and more recently they have been diametrically opposed on the issue of Syria. While Russia sees itself as the protective patron of Syrian dictator Bashar al-Assad, Ankara’s Syria policy since the outbreak of the war could be summed up in three words: Assad must go.

As of late, however, relations are flourishing. Two serious crises – the shooting down of a Russian fighter jet in November 2015 and the murder of the Russian ambassador in Ankara in mid-December 2016 – have been tacitly settled. Turkey has de facto recognized Russia’s policy in Syria. Ankara has not demanded that the Russians distance themselves from the YPG and PYD, as it insisted that the Americans do. Russia partly supports the militia in Syria, while the Turks are fighting it as part of their military operation Euphrates Shield.

Why de-escalation now? Two reasons may play a role. On the one hand, the two presidents are united in their wrath against the West. On the other hand, having close ties with powerful Russia is one way for an increasingly isolated Turkey to gain relevance on the world stage.

Ankara’s de facto recognition of Russia’s Syria policy implied recognition of the Syria policy of another major regional power with which Turkey has at best an ambivalent relationship: Iran. The two countries have close economic ties. Like Russia, Iran is an important energy supplier. They have also agreed to curb and combat Kurdish movements in their own countries as well as in the region. Yet there is a religious dimension to the two countries’ dynamic, which is bound to cause tensions. Erdoğan’s AKP government sees itself as the protective patron of Sunnis in the region, while Iran is a majority Shiite country.

Erdoğan’s most recent reversals, including his renunciation of Israel, may no longer be the exception; they may very well become a fixed element in Turkey’s new foreign policy.

Western – and in particular German – policy on Turkey will have to become accustomed to Ankara’s zigzagging course and its many contradictions. The country’s reorientation away from the West and towards the East, especially Russia, need not be a permanent configuration. “It is characteristic of autocrats that they arbitrarily and very quickly change the baselines of their policies,” wrote political scientist Herfried Münkler. Of the presidents of Russia and Turkey he says, “if the European Union wants to fracture and crack the ‘bromance’ emerging between these two autocrats, they will have to end their policy of reprimanding them and threatening them with sanctions, and work in accordance with the old principle of ‘divide et impera.’”

There are still frequent hints of Turkey’s desire to have a foot in the door of the European Union in the future. The EU should take note.

A version of this article appeared in print in February, 2017, with the headline “Wrath against the West”.

Özlem Topçu is a political editor at the German weekly Die Zeit.