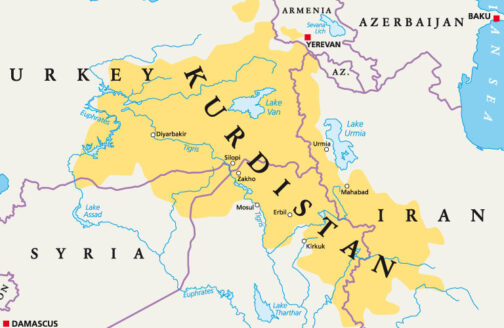 After a stunning series of events…” – this is the typical opening line these days for an analysis of developments in the Middle East. Kurdish affairs are no exception. Only a short while ago, the Kurds were considered the big winners of a decade of upheaval in the region, having achieved de facto autonomy in northern Syria and inched closer to independence in northern Iraq. But as of 2020, the military force and geopolitical machinations of much larger powers have shattered both of these gains.

For most Kurds, history just seems to repeat itself. Their dreams and several short-lived attempts to carve out a territory of their own have been dashed time after time – by the infamous Sykes-Picot Line drawn in 1916 and the treaties following World War I as well as today’s deals between Recep Tayyip Erdoğan and Vladimir Putin and the erratic foreign policy of Donald Trump.

So, for the time being, the Kurds will remain the world’s largest ethnic group without a country, comprising about 35 million people, the vast majority of whom are dispersed over four nation states – Turkey, Iran, Iraq and Syria.

Each of these states has repeatedly initiated brutal waves of repression. And in each case, Kurds have resorted to armed resistance and guerilla warfare. Given this history, it is remarkable that the Kurds have never figured prominently in larger visions and strategies to stabilize the Middle East. But clearly, there will be no peace and no stability without a solution for the Kurds.

There is a problem, however. The Kurds are not united as a single national identity. Not only do the Kurds have a long history of suffering at the hands of others, they have also suffered from infighting and political ineptitude. Whenever Syrian or Iraqi dictators, the Turkish army or the Iranian regime set out to suppress a Kurdish struggle for independence or autonomy, they could always find Kurdish collaborators. And even without an external enemy, Kurdish factions have shown a disturbing propensity to weaken their own cause. Northern Iraq and northern Syria are currently two cases in point.

For almost 30 years, the Iraqi Kurds have had an opportunity to develop a more diversified economy and modernized state structures. A no-fly zone established by Western powers in 1991 protected them from Saddam Hussein’s terror. After Saddam’s fall in 2003, they enjoyed close ties to the United States, growing revenue from oil fields and a good relationship with neighboring Turkey. But they never managed to leverage their strength.

Without a doubt, the Kurdish Autonomous Region (KAR) remains the most stable area in Iraq. Its civil society and administration can muster great efforts in times of acute crisis, such as during the war against the Islamic State (IS). But the KAR still struggles with establishing an operational framework for development. The economy is at a standstill, youth unemployment is soaring and public employees often work without pay for months or even years. This is partly due to a conflict with the central government in Baghdad about oil revenues and budget allocation, but the problem is also rooted in the endemic corruption, nepotism and antagonism that plague the two dominant political parties.

Both the Kurdistan Democratic Party (KDP) and the Patriotic Union of Kurdistan (PUK) are run like fiefdoms by powerful families. Both use large parts of the Kurdish armed forces, the Peshmerga, as their private militias and have repeatedly clashed militarily.

The Kurdish Autonomous Region has justified complaints about the way it is being treated by Baghdad. But the referendum for independence in September 2017 was primarily a power gamble by then-President Massoud Barzani. The Barzani family rules the KDP and the western part of the autonomous region. In his attempt to drown public anger about corruption amid a wave of independence euphoria, Barzani completely miscalculated the international reaction to the prospects of an independent Kurdistan – and to a disintegrating Iraq. His long-time ally in Ankara was as adamantly opposed as were the EU, the US and neighboring Iran. The Iraqi army and Iraqi Shia militias buried Barzani’s dream of independence with a quick incursion. The PUK, never fond of the referendum, quickly cut its own deals with Baghdad and Tehran.

The KAR’s economy is still a mess. The political mood in the streets of Erbil, Dohuk or Sulaymaniyah is one of apathy as their inhabitants brace themselves for another influx of refugees from Syria.

The KAR is perhaps the latest case of another dream of Kurdish self-rule falling apart, but likely with much more dramatic consequences. Just like their Iraqi kin under Saddam Hussein, the Kurds in Syria have suffered greatly under the Baath regime in Damascus. However, when in 2011 the popular uprising began against Bashar al-Assad, they did not close ranks with the Syrian opposition, but instead cut a deal with the regime. Damascus withdrew its security forces from the Kurdish north. The Kurds thus gained control over large parts of the north and promised not to participate in any attacks by the opposition against al-Assad’s army.

Syrian Kurds now live under the tight control of the Kurdish Democratic Union Party (PYD), an offshoot of the leftist Turkish Kurdistan Worker’s Party (PKK). Ideologically, both are despised by most of the political establishment in Iraqi Kurdistan. During the war against IS, they became distrustful allies. But it was the People’s Protection Units (YPG) – the PYD’s military wing – who proved the most effective ground force against the jihadist movement, not the somewhat rusty Peshmerga fighters in Iraqi

When in 2014 the US chose the YPG as a partner for military operations against the IS in Syria, YPG leaders mistook this for a long-term guarantee of US protection for their own territorial project: three self-administered but geographically separate cantons in Syria’s north unified under the name “Rojava.” It was a tempting but strategically reckless undertaking.

Over the last few years, Rojava has been a relatively safe haven within war-torn Syria. It is also a cause célèbre among parts of the European left, which generously overlooks the PYD’s authoritarianism. But to neighboring Turkey, the existence of Kurdish self-administered zones run by a PKK-affiliate along the Syrian-Turkish border has been a red rag and a source of fury directed at its NATO partner, the US. So, once the IS was on the run in Syria, Washington began to seek reconciliation with Ankara – the Donald Trump way.

In 2018, the White House and Pentagon looked the other way when the Turkish army ended Kurdish self-rule in Afrin, the western-most of Rojava’s three cantons. In October 2019, after Trump’s impulsive announcement that US troops would be withdrawn from Syria, the Turkish army invaded parts of eastern Rojava. Erdoğan then went to the one big power that really counts in Syria – Russia – to get the green light for a “safety zone” of 120 kilometers along the Syrian side of the border. It is here that he wants to relocate Syrians that have fled to Turkey – thereby not only lowering the number of refugees in his own country, but also creating a buffer zone of Sunni Arabs in the Kurdish region.

When the PYD begged the regime in Damascus to help against the Turkish incursion, Assad was only too happy to oblige. His forces are now back in the north.

For now, Putin has proven surprisingly adept at keeping a lid on this combustible set of different interests, drawing red lines for Erdoğan and Assad while feeding the Kurds some hope of political survival. Other global actors are barely to be seen. Trump has performed a small turnaround and left several hundred US soldiers in Syria, although no one knows for how long. The EU still seems preoccupied with keeping out new refugees, thereby exposing itself to Turkish blackmailing. Erdoğan has already threatened to open the route for Syrians in Turkey into the EU, should the EU not support his “safe zone” on Syrian territory.

From a Kurdish perspective, the light at the tunnel’s end – if there is an end – is barely flickering.

ANDREA BÖHM
is a journalist. She is stationed in Beirut where she covers the Middle East for the German weekly Die Zeit. 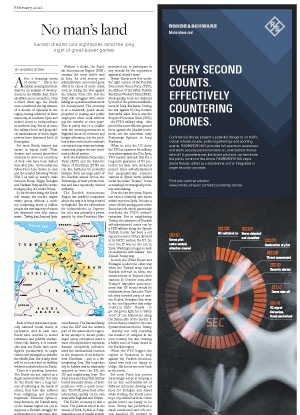