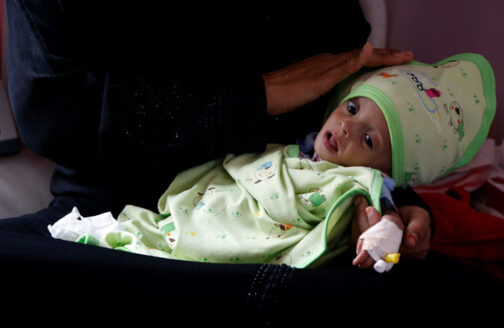 Since March 2015, a horrific war has raged in Yemen under the direction of Saudi Arabia and the United Arab Emirates. All rules and norms relating to international law and laws of armed conflict are being trampled underfoot. The result is the worst humanitarian crisis of the 21st century.

Even after five years of fighting, a peace deal appears unlikely in the medium term. Too many parties and small groups now profit from the war and the war economy. Moreover, the two chief protagonists, Saudi Arabia and the UAE, have yet to achieve their geostrategic objectives. The only hope is that a UN-sponsored ceasefire deal in 2020 could clear the way for a political resolution to the conflict in the coming years.

Yemen today is more fragmented than ever, territorially, socially, ethnically and religiously. The country’s infrastructure has been destroyed. The education and health care systems have ceased functioning and the country is facing total economic collapse.

Any future agreement designed to settle the conflict in Yemen would automatically imply a redefinition of the country’s statehood. The unified state authority, citizenship and contiguous territory would probably give way to a mosaic of states, the pieces of which would be beholden to the various regional powers. This scenario would no doubt create fertile ground for additional wars in the near future.

By March 2020, the war in Yemen will have lasted a full five years. Back in the spring of 2015, Saudi Arabia and the UAE decided to start bombarding Yemen with the help of a military alliance of Arab and African states and to use mercenaries on the ground to force the country to capitulate. Although it violated international law, the US and many other Western states supported this war under the pretext of seeking to reinstate the legitimate government of President Abdrabbuh Mansur Hadi, who had been driven from the capital Sana’a by Ansar Allah’s Houthis.

The Saudi military’s initial four-week blitzkrieg – Operation Decisive Storm – has long since become a ruinous war of attrition and annihilation that has so far cost tens of thousands of lives. Seemingly random airstrikes against military, civilian and cultural targets have only added to the suffering.

The humanitarian situation in Yemen deteriorates with each additional day of fighting. Hospitals, schools, markets, civilian factories, warehouses, reservoirs, and farmland as well as even prisons, orphanages, festival halls and community centers are all targets of the Saudi air campaign.

The toll of this war is appalling. As of December 2019, more than 100,000 people had been killed in direct conflict action, in addition to at least 130,000 mortalities indirectly caused by the fighting. Add to this 3.65 million refugees and internally displaced persons, 20 million who live in poverty – including 14.3 million acutely threatened by famine – and some two million children who cannot go to school.

Yet the military alliance has failed to expel the Houthis from Sana’a, the capital, and return the ousted government to the country. Hadi and his cabinet continue to conduct their government work mostly from exile.

Support for this government-in-exile among the Yemeni population has largely withered. Still, the Saudis are sticking with Hadi because he provides justification for their military intervention. While he was still the country’s head of state, Hadi reportedly requested the intervention to expel the Houthis from Sana’a.

Early on, the Saudi-Emirati plan seemed to be working. Within weeks, Houthi fighters that had advanced as far as the port city of Aden at the start of 2015 were driven from virtually all their conquered territory in the country’s south. The alliance’s superiority in the air and on sea swiftly shut down supply routes for the Houthis, who then pulled back within the territory of former North Yemen. Despite the uneven fight, however, the alliance’s publicly declared objectives continue to be elusive.

Sana’a remains firmly in the hands of the Houthis. They continue to control most of former North Yemen and are consistently cementing alliances with the area’s influential tribes, which have since declared their allegiance to the new leader of the Houthi movement, Abdul-Malik al-Houthi. Relations between the Shi’ite Houthis and Iran – once only marginal – are steadily expanding as the war progresses. They now constitute a stable axis that will remain in place after the war has ended.

It was the David and Goliath war that drove the Houthis firmly into the Iranian camp. Their fighting tactics, internal structure and national and international agendas have since come to mirror those of their alleged role model, the Hezbollah militia in Lebanon.

What went wrong with Operation Decisive Storm? Why did the alliance fail to continue its string of early successes? How can it be that this military alliance under Saudi leadership, equipped with the most modern arms and Western know-how, has yet to recapture Sana’a?

The answers are multi-tiered and focus on the alliance’s two main protagonists: Mohammad bin Salman (MBS), Defense Minister and Crown Prince of Saudi Arabia, and Mohammed bin Zayed (MBZ), brother of the sidelined president of the UAE and de facto leader of the Emirates.

On a personal and psychological level, MBS displays signs of paranoia and an urge to stand out from others. His paranoia focuses mostly on a possible alliance between Iran and a Houthi-controlled Yemen. In that event, Saudi Arabia would find itself in a “Shi’ite vise” between a powerful Iran to the north and a weaker but battle-hardened Shi’ite Yemen to the south.

As crown prince, MBS is seeking to hone his profile for when the time comes to succeed his father, who is now 84 years old. Only as a bold and successful commander-in-chief and putative victor over Iran can he gain the support of the Saudi people, who have been ruled by a gerontocracy since the founding of their state and are unaccustomed to young political figures.

At the foreign policy level, Saudi Arabia under MBS is seeking to create the image of a regional power that is open to the world yet sets the rules in the Arab realm and beyond. This is the motivation behind the country’s top-down liberalization, its willingness to strike deals with Israel and its medium-term objective of ensuring its own security without the need for US help.

For this, the Saudis need a seasoned military capable of responding to and coping with the region’s breakneck pace of change. As the training ground for his previously weak and inexperienced army, the PlayStation aficionado chose Yemen, where he could convert his world of war games from virtual to real. As an aspiring regional power, Saudi Arabia is taking its first steps at the expense of the defenseless Yemeni population while testing its most modern weaponry. There has been much ridicule of Saudi Arabia’s waste of expensive military equipment in Yemen; Western arms makers can barely keep up with the Gulf state’s appetite for more military machinery.

Similar dreams of regional power have also long been occupying the mind of MBZ. His pragmatic alliance with MBS is meant to help realize the Emiratis’ own dreams of hegemony. One of their key aims is to bring as many ports as possible on both sides of the Red Sea under their control. Most already are. Control of the port of Aden and the key offshore islands in the Arabian Sea constitute an incalculable strategic advantage. This is why the Emiratis’ attention is directed mainly at Yemeni towns on the Red Sea coast and the many islands that can be exploited both militarily and for tourism.

For some time now, the UAE has proudly claimed the nickname “Little Sparta” and, in the medium term, wants to replace Israel as the premier US ally in the Middle East. Over the past decade, the Emirates has broadened its influence in the Middle East both economically and militarily. Huge investments in port facilities along the Red Sea and Gulf of Aden are planned or already going ahead.

Additional ground and maritime bases would aid the UAE in securing its vital oil transport routes while helping curtail Iranian expansion. In addition to Assab in Eritrea and Berbera in Somaliland, these projects include Port Sudan, Mukalla in Yemen and Bosaso in Somalia.

The Saudis, meanwhile, are focusing on controlling important governorates in Yemen’s interior. The aim is to secure broad stretches of the country as quasi-protectorates under complete Saudi control once the fighting ends. Saudi forces are especially present in the eastern governorate of Al Mahrah, which stretches along the entire Yemeni-Omani border.

The Saudis are also building a pipeline through the governorate of Hadhramaut. Occupation of Al Mahrah would allow them to ship their oil from the southernmost parts of the Arabian Peninsula, conveniently bypassing the Persian Gulf and freeing the Saudis from having to navigate the Strait of Hormuz, which their archenemy Iran can threaten at will.

Moreover, a Saudi occupation of Al Mahrah would deprive Yemen of its border with Oman, leaving Saudi Arabia as Yemen’s sole neighbor. Oman disapproves of this expansion, regarding it – as it does the Yemeni governorate on its southwest border – as a buffer region and its own sphere of influence in Yemen.

In 2018, when the alliance nearly retook the strategically important port town of Hodeida from the Houthis, they were forced to relent at the last minute. The case of murdered journalist Jamal Khashoggi attracted huge public attention and put the Saudi leadership on the defensive. Khashoggi’s abhorrent killing inside a Saudi consulate revealed the true face of the state driving the war in Yemen. For the Saudis, an immediate cessation of the fighting in and around Hodeida was the logical choice to prevent even more unwanted public scrutiny and hostility.

In 2020, two big events will have the potential to halt the war in Yemen, at least temporarily, and enable a ceasefire.

Saudi Arabia took over the G20 presidency at the end of 2019 and is planning to hold this year’s G20 summit in Riyadh. The UAE has long been advertising its Expo 2020, due to begin in October. If these two Gulf states want to ensure big turnouts for these two key events, they will first have to burnish their images.

The Emiratis moved first, withdrawing nearly all their troops from Yemen, yet without providing their allied groups in Yemen with necessary financing and equipment. And for several months now, Saudi Arabia has been conducting direct talks with the Houthis. The tangible results of these talks will become clear in the coming months.

Regardless of all the speculation over a truce in Yemen, the country’s fate seems already sealed. The most likely result of this war is a partitioned country, divided into at least two autonomously ruled areas in which the Yemeni people are not their own masters and most inhabitants remain vulnerable to famine, drought and intermittent conflict.

SAID ALDAILAMI
is a political scientist and a retired Bundeswehr officer. He is the Hanns Seidel Foundation’s regional director for Tunisia, Algeria and Libya. 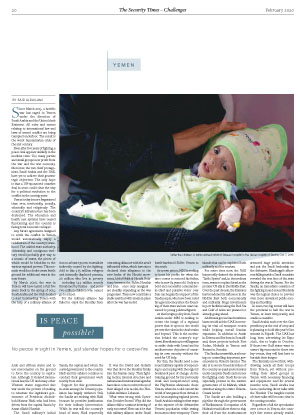