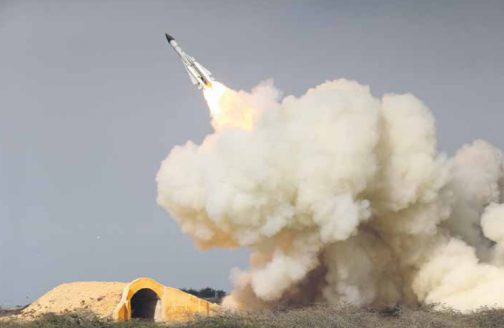 There has long been much handwringing in Washington over Iran’s ballistic missiles. They are portrayed as a threat to regional security developed with the aim of one day being armed with nuclear warheads. Yet those missiles form an integral part of Iran’s defensive military posture, which is fundamentally geared towards deterring attack.

When it comes to conventional military power, the regional balance is stacked against Iran to a staggering degree, with Saudi Arabia outspending Iran 5-to-1 on its military and even the UAE, with a native Emirati population of less than two million, spending 50 percent more than Iran. The United States, with its massive military presence in the region, spends nearly 70 times more than Iran.

At the peak of hysteria over Iran’s nuclear program in 2010, the UN Security Council passed Resolution 1929, which was spearheaded by the US. Imposed after a series of nuclear swap offers – whereby Iran would exchange enriched uranium for nuclear fuel – were rebuffed by Washington (including one facilitated by Brazil and Turkey), the resolution levied far-reaching nuclear sanctions on Iran. It also sought to place restrictions on Iran’s missile program, stating that Iran “shall not undertake any activity related to ballistic missiles capable of delivering nuclear weapons.”

However, with the July 2015 nuclear deal, formally known as the Joint Comprehensive Plan of Action (JCPOA), the groundwork was laid to remove UN-mandated restrictions on Iran’s missile program. Resolution 2231, the UNSC resolution endorsing the deal, removed 1929’s strict language on missile tests. Resolution 2231 instead “calls upon” Iran not to undertake missile tests that are “designed to be nuclear capable.” As Greg Thielmann of the Arms Control Association has stated: “[This language] implies nuclear weapons intent must now be established in assessing the design of any missile launched by Iran – an even higher bar in light of Iran’s acceptance of stringent limits on its nuclear program.”

Donald Trump’s election as US president and his appointment – to senior positions – of figures who have sought to provoke conflict with Iran in the past, has spurred global concern about the fate of the nuclear deal. Iran’s recent missile test, no doubt conducted with the aim of deciphering the Trump administration’s stance towards Iran, was greeted with overt hostility by the White House. Trump’s national security adviser, Michael Flynn, who in the past tried falsely to blame Iran for the 2012 attack on the US consulate in Benghazi, Libya, threatened that Iran was now “on notice” for the missile test. This was followed by the imposition of new sanctions.

It goes without saying that conducting missile tests is well within Iran’s rights as a sovereign nation. The consensus between Iran, the P5+1 powers and the IAEA is that the tests are not a violation of the JCPOA. Among the P5+1, it is only the Trump administration that now claims the tests are a “defiance” of Resolution 2231. There is simply no evidence that the missiles Iran is testing are designed to carry nuclear warheads. As Mikhail Ulyanov, the head of Russia’s Department for Nuclear Non- Proliferation and Weapons Control, has said: “As stated by the Iranians, the missiles they test are incapable of carrying nuclear warheads. No one has yet provided any evidence that this is untrue. So the question emerges, what violations are we talking about? No violations whatsoever.”

However, some have argued that the missile tests violate the spirit of Resolution 2231. A 2016 report by UN Secretary General Ban Ki-Moon found that Iran’s ballistic missile tests were “not consistent with the constructive spirit” of 2231, but were not a violation. The Trump team’s hysteria regarding the tests is not only unwarranted, but threatens to undo the nuclear deal and put the US and Iran on a path to war.

In terms of an international agreement whose spirit has been violated, the JCPOA itself serves as a prime example in quite a different way. Since it was implemented in January 2016, the International Atomic Energy Agency (IAEA) has verified six times that Iran has met all of its JCPOA commitments. However, the US has done a lessthan- satisfactory job of fulfilling its JCPOA obligations, which include allowing for the uninhibited accrual of the benefits of sanctions relief. This was the case under Obama, and is set to worsen under Trump.

The nuclear deal’s text specifically requires the US to “sustain this JCPOA and to prevent interference with the realization of the full benefit by Iran of the sanctions lifting.” However, since the deal’s implementation, the US government has taken a host of actions which, while not in outright violation of the deal, run counter to its spirit.

In January 2016, on the day of its implementation, the US imposed new sanctions on Iran over its missile program. This was followed by new legislation signed into law by President Obama requiring individuals from countries with visa-free US travel agreements to attain visas before entering the US if they have visited Iran. This has created a significant barrier to Iranian trade with Europe and Northeast Asia. Trump’s notorious Muslim ban is only the extension of this policy.

By March 2016 it had also become clear that Iran was having difficulty financing the post-JCPOA trade agreements it reached with companies from Europe, Asia and beyond. The issue was twofold. First, a US ban on “dollar clearing” for Iran remained in effect, which prevented foreign banks wishing to facilitate Iran-related transactions from accessing the US financial system to conduct transactions in US dollars – the currency for most major international trades. This had the effect of impeding Iran’s ability to engage in international trade and repatriate its frozen assets. Second, international banks and investors were continuing to steer clear of Iran for fear of violating the spider’s web of existing non-nuclear US sanctions or potential future sanctions that could threaten their investments.

Adding insult to injury, in April 2016 the US Supreme Court broke all international legal precedent by ruling that $2 billion of frozen Iranian US assets could be sued for by families of victims of terrorist attacks. This marked a violation of a basic principle of international law known as sovereign immunity, under which foreign governments cannot be subject to private lawsuits.

Since the JCPOA was reached, the US Congress has tried relentlessly to undermine it. In 2016, more than 80 bills were introduced in attempts to scuttle the deal. One bill, a renewal of the Iran Sanctions Act, was passed in November and not vetoed by President Obama, triggering outrage across the political spectrum in Iran. Nevertheless, for the most part Obama still stood as a bulwark against congressional hawks trying to sink the deal, a role Trump will almost certainly not continue.

Ostensibly in response to Iran’s missile rest, Trump has already imposed new sanctions on 13 Iranian individuals and 12 entities, a number of which are based in Lebanon, the United Arab Emirates and China. The international impact of these sanctions is clearly meant to further discourage global firms from doing business with Iran.

There has now been one year of successful Iranian implementation of the JCPOA despite repeated US violations of the spirit of the deal. However, the Trump administration’s saberrattling over Iranian missile tests is set to undo the deal, while its new sanctions under the umbrella of human rights, terrorism, weapons of mass destruction and regional issues are bringing tensions between the US and Iran to dangerous new heights. This would void an agreement that is the most comprehensive achievement in the history of nuclear non-proliferation and a model for realizing a world free of nuclear weapons. Moreover, it would weaken the fight against the Islamic State – as Iran is at the forefront of combatting the group – and contribute to greater regional destabilization.

A version of this article appeared in print in February, 2017, with the headline “Spiritual crisis ”.

Seyed Hossein Mousavian is a Middle East security and nuclear policy specialist at the Woodrow Wilson School of Public and International Affairs at Princeton University and author of Iran and the United States: An Insider’s View on the Failed Past and the Road to Peace.

Federica Mogherini, High Representative of the EU for Foreign Affairs and Security Policy, stated unequivocally how the EU should conduct itself in relation to the Iran nuclear deal: “There should be no doubt that the EU stands firmly by the deal,” she wrote in an article published Jan. 17 in The Guardian. The agreement is “a multilateral endeavor and now belongs to the entire international community, through its endorsement by the UN Security Council.”

She was writing in response to statements by US President Donald Trump, who had announced plans to annul the deal. “This agreement was the result of brave choices, political leadership, collective determination and hard work,” wrote Mogherini, who was the EU’s chief negotiator in the international joint plan of action. “The Iran deal is working and we need to maintain it.” It addresses “a highly contentious and longstanding dispute in a peaceful manner. In its absence, we might be facing one more military conflict in a region that is already far too destabilized.”

Iran’s nuclear program “has been significantly reformatted and downsized” and is now “subject to intense monitoring by the IAEA.” The joint commission, which Mogherini herself coordinates, “oversees constantly the implementation of the agreement, meeting regularly, which allows us to detect even minor possible deviations and to take necessary corrective measures.” Iran’s nuclear program now is of a “purely peaceful,civilian nature.” PHK

The Minsk Protocol in the absence of trust