For a future without chains : African authoritarianism and Western intrusion are blocking the continent’s development

Africa is the cradle of humanity and simultaneously the world’s youngest continent. It is home to more than 1.3 billion people (including North Africa), a number that continues to increase by roughly 50 million each year. According to UN projections, the population is set to almost double to roughly 2.5 billion people by mid-century. In Europe, this rise is often depicted as a horror scenario, with many focusing on the fact that economic development in Africa is not keeping step with demographic growth. In Africa itself, however, this new generation of exuberant young Africans is valued very highly – as an engine for growth and change, as a means of overcoming ossified political and social structures and as trailblazers towards a better future thanks to a more unobstructed view than previous generations. These young people make up the majority of the population.

When an irresistible force meets an immovable object, things usually don’t end well. Today, in many African countries, irresistible forces – in the form of innovative social movements and urban protest cultures – are coming up against immovable objects embodied by long-tenured presidents and their military-economic power apparatuses. While this phenomenon is having a major impact on Africa’s political development, it also provides us with a framework within which to evaluate security risks and the emergence of new crisis hot spots.

It is rare for sub-Saharan Africa to experience spectacular escalations akin to the revolts associated with the Arab Spring in 2011, which continues to function as an inspiration for African protest movements. The 2014 popular uprising that toppled Blaise Compaoré, the long-time ruler of Burkina Faso, remains an exception. Much more prevalent are cat-and-mouse games that tend to run on forever between clever emerging critics and state apparatuses that react automatically in an authoritarian way.

For example, Ugandan rapper Bobi Wine garnered worldwide attention when he became the youngest parliamentarian elected in his country, but also a victim of legal persecution and even physical abuse. Similar cases, albeit not as well-known, can be found almost everywhere on the continent. Singers are especially well-suited to take up such opposition roles, but there are also more and more young preachers, feminists, students and social activists speaking out.

Many rulers find it politically expedient to decry such forms of opposition as seditious, and even as displaying terrorist tendencies due to the fact that these individuals operate outside of established institutions. Indeed, the charge of high treason and terrorism against Africa’s non-parliamentary opposition is an ideal pretext to call for support from other states, to arm the security forces and to justify the restrictions on civil rights.

When seeking to prove the necessity of these measures, some state actors even stoop to fomenting low-intensity armed conflicts themselves, which then give them good cause to use military force against their own people. In countries with chronic security problems, such as Mali, Nigeria or the Democratic Republic of the Congo, well-founded rumors circulate that one or the other armed group actually enjoys political or military protection. However, anyone who openly expresses such suspicions will quickly become the next target of state reprisals.

The background circumstances are key to understanding why so many African countries are plagued by structural instability and why armed conflicts break out easily yet are very difficult to bring to an end. When violence radiates from a known area of unrest and spreads to previously peaceful regions and neighboring countries, the usual security policy reflex from outside Africa is a military one: armed forces in each African country are strengthened and placed in a position from which they can face the threat independently. As policy, this approach is not wrong; however, most African armies are in desolate condition, which begs the question of why young men with uniforms and weapons do not demand improvements to their living conditions in a much more pressing manner.

In most regions of Africa outside of larger cities – and sometimes even in these cities – people take care of their own safety and manage their own living conditions as much as they can. At best, the state is merely absent; at worst, it functions as an intrusive authority. In such contexts, providing new military equipment without any accompanying new policies is doomed to lead to more insecurity, not less. From Mozambique to Algeria, we see countless examples of where this phenomenon hinders political development and upholds ossified power apparatuses – all at the expense of social stability.

For this reason, it is gravely misguided that to this day Africa is seen, especially by Europe, as a kind of military training field or experimental laboratory. New approaches are tested time and again in Africa, with the erroneous assumption that their eventual failure would have no serious consequences. In Somalia, for example, Germany’s military engaged in its first combat mission since World War II; in Congo, the European Union engaged in its first-ever military intervention; in Sudan, the United Nations undertook its first joint military mission with the African Union; and, finally, the first active, cross-border multinational combat force is being set up in the Sahel.

Each of these operations charted brand-new territory. And yet, none of them were adequately thought through in advance or subsequently evaluated in an effort to draw generalized conclusions – certainly not in cooperation with the affected states and their populations.

Thus it would be highly damaging to the credibility of future European policy in the Sahel if the current flagship project – the multinational intervention force G5 Sahel comprising Burkina Faso, Chad, Mali, Mauritania and Niger – were to fail because it does not live up to its own financial commitments and does not develop a recognizable strategy.

In those African countries where large UN peacekeeping missions have been stationed for years – Congo, South Sudan, Central African Republic – without any visible effects on the security of the people, trust in the credibility of the international community has dropped to zero. International aid and non-governmental organizations are already subject to severe criticism across the continent. Indeed, while many perform valuable work that saves countless lives and draws attention to forgotten victims of war and injustice, others burn ten times as much money as local organizations.

The notion of “Africa First” – which rejects all foreign interference in African affairs in the name of a sovereignty that is available solely to violent actors – has long been in full swing. More and more African governments want nothing to do with outside forces, especially Europe, North America, the UN and other international organizations. This state posture reflects the deep-seated resentment felt by their peoples against paternalism and racism. At the same time, authoritarian regimes exploit this posture as a means of closing themselves off from criticism and cloaking their own bad politics in populist tones.

The starting point for a more enlightened international approach to Africa would be to perceive Africans as they are and take them seriously as actors – rather than passive objects – in creating their own future. What we can say for sure is that whichever the path the cradle of civilization takes, it will shape the future of the entire world.

DOMINIC JOHNSON
is foreign editor of the German newspaper TAZ (die tageszeitung). He has been reporting from Africa since 1990. 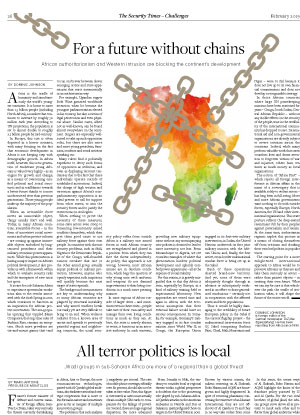