Return to reason. The construction of the Nord Stream 2 pipeline is highly contentious. Two German experts present their different views for The Security Times.

As polarized as the discussion surrounding Nord Stream 2 may be, each side posits legitimate arguments deserving of careful consideration. It is thus essential to discard doomsday scenarios, return to reason and soberly substantiate the debate. Four main issues are at stake:

Detractors of Nord Stream 2 argue that European energy security is already impaired by an over-dependency on Russian gas. As was the case with previous energy cooperation projects, such as the German-Russian gas-for-pipes deal of the 1970s (“Röhrenembargo”), it is first and foremost Washington that is in opposition, ostensibly in the belief that Russia covers the vast majority of European gas demand. However, this share, often exaggerated in the US, has been fluctuating over the past decade between roughly one-quarter and one-third.

But more importantly, after the Ukrainian gas crises in 2006 and 2009 – which in some Central and Eastern European countries led to serious supply shortages and justified concerns – the EU took decisive action to drastically diversify supply sources and improve energy security. What emerged is a functional and highly flexible European gas market, lacking confining destination clauses and boasting new interconnectors, storage facilities, reverse flow capabilities and over 30 European LNG import terminals (sufficient to cover more than half of EU demand). While just a decade ago the EU might still have been susceptible to blackmail, we are now witnessing a much-improved energy landscape where gas can scarcely be weaponized.

Prospective European gas demand is a similar point of contention. Will not the triumphant advance of renewables and efficiency measures make additional gas import capacity superfluous? In a recent speech, EU Climate Action and Energy Commissioner Miguel Arias Cañete made abundantly clear that this is not the case: “Gas has an important role to play in our decarbonization efforts [and] will shift towards a role where it will complement various renewables and replace more polluting fuels.”

In the short and medium term, Europe will continue to require large volumes of low-carbon fuels for heating, transportation and shipping, as well as for the substitution of coal in electricity generation. Even if consumption levels remain stable, import necessity will expand due to dwindling availability of domestic gas resources; in the Netherlands, for instance, production dropped from 81 bcm in 2013 to 47 bcm in 2016 due to concerns over seismic activity.

Opponents of Nord Stream 2 also challenge the business sense behind the pipeline. But Russia is far from alone in recognizing the opportunities on the European gas market. Other present and prospective contenders include Norway, Qatar, Iran, Azerbaijan, Russia and, not least, the United States with its shale gas industry. Most recently, Israel, Cyprus, Greece and Italy signed a memorandum for the construction of the world’s longest underwater pipeline to supply Europe over 2,000 kilometers with up to 16 billion cubic meters of gas per year. The industry seems far from suffering a lack of demand.

This is good news for Europe. The continent’s emerging and diverse portfolio of gas imports contributes to the overall security of supply, to competition and thus to affordable gas prices for households and industry. For better or for worse, the advanced integration of the European gas market and the need for redundant, parallel infrastructure – as the new Nord Stream strands would provide – were demonstrated at the end of last year by an unfortunate explosion at a major gas hub in Baumgarten, Austria, affecting markets all the way from Italy to the UK. The incident promptly triggered an order for a short-term LNG delivery. Incidentally, this order came from Gazprom’s Russian competitor, Novatel, which had inaugurated its Yamal liquefaction facility just days earlier.

The issue of subsidies has been raised, including whether they can be justified on the highly developed European gas market. But as long as investors bear the cost and risk of a new infrastructure project themselves – as is the case with Nord Stream 2 – and do not pass it on to governments or taxpayers, consumers should welcome the prospect of every additional gas molecule reaching our shores, irrespective of its origin.

However, even if Nord Stream 2 possesses a business rationale and poses no threat to European energy security, some argue it may still be objectionable from a geopolitical perspective. Is it not in our best interest to play tough and oppose Nord Stream 2 in order to offer an unambiguous response to Russian transgressions in Ukraine and elsewhere, instead of rewarding Gazprom with additional market access? If so, this should be clearly stated in order to prevent the erosion of European rule of law, not veiled in economic or legal pretext.

Moreover, a crackdown on Nord Stream 2 would not help Ukraine. In a study for the European Centre for Energy and Resource Security (EUCERS) at King’s College London, Andreas Goldthau argues that while the country would indeed miss out on transit fees should the majority of gas flows to Western Europe circumvent its network, it also stands to gain from new Western import options boosting its standing in price negotiations with its eastern neighbor and lowering its gas bill. And this would not be a first; the completion of the Lithuania’s floating Klaipėda LNG terminal in 2014 brought an immediate 20-percent price reduction for Russian gas imports, even before any significant volumes of liquefied gas had reached the Baltic state.

Political leaders in Europe and the US should think twice before doing precisely what they accuse the Russians of doing: using energy as a political tool. Pipelines such as Nord Stream 2 do not represent subservience to Moscow – they create stabilizing interdependence. This is as true now as it was during even the most precarious periods of the Cold War, when energy remained the only significant area of continued cooperation between East and West. Europe and the US would be well advised to bring calm and composure back into this debate. 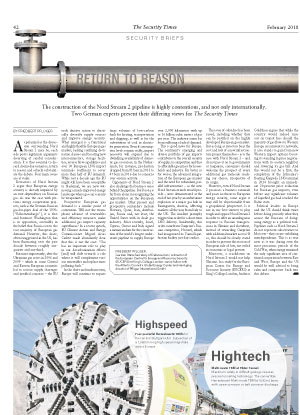