Superfluous and politically lethal. The construction of the Nord Stream 2 pipeline is highly contentious. Two German experts present their different views for The Security Times.

If we listen to those groups advocating on behalf of Nord Stream 2 – the second double pipeline designed to move Russian natural gas through the Baltic Sea – we might come to think the new project is a highly energy-efficient project and politically quite harmless. According to them, Nord Stream 2 will increase European energy security – after all, the Soviet Union was a reliable provider – and remain a purely commercial project. They argue that the European Commission would do well to stay out of the matter, and should refrain from interfering in Germany’s energy sovereignty. Objection, your Honor!

The “European Energy Security Strategy” adopted by the EU Commission in 2014 contains three explicit objectives: an increase in primary energy generation, the diversification of supplier countries and delivery routes, and a joint approach of EU states with regard to third countries. Nord Stream 2 clashes with all three of these objectives. First, the project speculates that natural gas imports to the EU will rise. Second, it increases dependency on Russia, which – already the largest gas supplier by far – accounts for roughly 30 percent of gas delivered to Europe. Finally, Nord Stream 2 has also become a divisive element for the EU, which is internally at odds over the project.

A coalition comprising the SPD, the Federal Government and the German Committee on Eastern European Economic Relations is driving this project forward against resistance from the EU Commission. In the eyes of Poland, the Baltic republics and Scandinavian countries, Nord Stream 2 is yet another example of Germany pursuing its narrow national interest without any coordination with its European neighbors.

A pipeline with a transport volume of 55 billion cubic meters per year and investment costs of up to €10 billion will be built to last for decades. The economics of the project are based on the estimate of a long-term increase in natural gas consumption in the EU. For today’s needs, this pipeline is simply superfluous. In 2015, Nord Stream 1 operated at a capacity of only 71 percent. There are also the reserve capacities contained in the continental pipeline system as well as increasing capacities available at liquefied natural gas terminals geared to meet future demand. In other words, there is no shortage in natural gas import capacity today, nor will there be a shortage in the future. For Nord Stream 2 to be used at full capacity, it would require either an enormous increase in EU gas consumption or a squeezing-out of other suppliers and transport routes. Neither of these scenarios would be in the interest of Europe. They would, however, be in the interest of Gazprom & Co.

A sustained increase in the level of natural gas consumption is incompatible with the climate policy goals of the EU. What we need is an extensive decarburization of the energy sector by mid-century. Instead of creating path dependencies in fossil energy imports over decades, our goal should be to remain flexible in terms of supply sources and transport routes. In the short term, demand for natural gas may pick up as a result of the gradual phasing-out of coal and a further reduction in oil consumption. Over the long term, however, consumption of natural gas will also experience a decline. One key factor in this process is the continuing improvement of energy efficiency in the building sector and heavy industry. Another factor is the substitution of natural gas by means of synthetic gas (hydrogen and methane) derived from excess renewable electricity. Also, the greater the share of wind and solar energy in Europe’s mix of electricity, the more urgent becomes the issue of converting excess amounts of electricity. Any fixation on the import of natural gas would only serve to delay the development of alternative state-of-the-art technologies on an industrial scale.

The claim that Nord Stream 2 is a purely commercial project is naïve. It would be severely negligent to overlook the fact that this pipeline is part of a geopolitical game played by the Kremlin. The goal of this game is to eliminate Ukraine and Poland as transit countries, to cement European dependence on energy imports from Russia and to drive a wedge between EU countries. While Europe continues to lack a common strategic energy policy, the Russian side continues to expand its energy empire. Part of this game also involves the strategically placed construction of nuclear power plants designed to export electricity to the EU, such as the 2400-megawatt complex on the Belarusian-Lithuanian border and an equally large facility in Kaliningrad.

Gazprom is not your average corporation. Together with the oil giant Rosneft, it forms the economic basis of the authoritarian regime in Moscow. Oil and gas are the most important sources of income for the Russian state and the richest source of systemic corruption. At the same time, Gazprom and Rosneft are at the center of the Kremlin’s economic networks in Europe. Indeed, it will be interesting to see how German ex-Chancellor Gerhard Schröder navigates these waters in his role as a leading Gazprom and Rosneft lobbyist.

There is a much less expensive alternative to a second Baltic Sea pipeline: the modernization of the continental transport network. This would comprise a multilateral project that would benefit everyone. If Ukraine and Poland were to be eliminated as intermediaries for Russian gas exports to Western Europe, they would lose billions of euros in annual transit fees. In addition, the Kremlin would be able to turn off the gas at any time without jeopardizing its export business. Ukraine would then become even more vulnerable to Russian policies of intimidation. This, too, is part of the political dimension of Nord Stream 2.

If Germany’s goal is to achieve a cooperative European energy system, then we should not support the policy pursued by the Kremlin. Our Central and Eastern European neighbors will no doubt express a critical yet understandable sensitivity if their interests and concerns are ignored in another grand bargain between Germany and Russia. Nord Stream 2 is a test of how serious Germany’s commitment to “more Europe” truly is.

was the longtime head of the Heinrich Boell Stiftung, an independent political foundation affiliated with Germany’s Green Party. He is now the director of the Berlin- based think tank Zentrum Liberale Moderne. 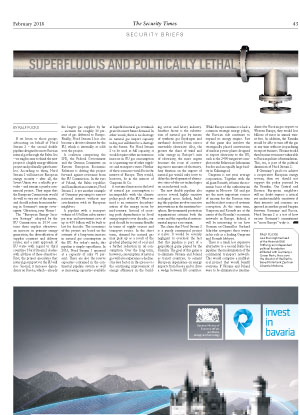