By Mathias Albert and Thomas Müller

As a comparative measure, military spending is frequently used in both scholarly and political debates. Assessing the balance of power, level of armaments as well as arms races and arms control issues all require comparisons. While military spending refers to the input rather than the output dimension of military capabilities, it is nonetheless often regarded as a straightforward comparative measure.

At second glance, however, military expenditures illustrate the difficulties and elusiveness of making objective comparisons. What compounds these difficulties is the lack of global standards. Despite long-running UN efforts, there is no official, globally comprehensive data on military spending. This stands in stark contrast to the critical and widely used global economic data provided by international organizations such as the IMF and the World Bank.

In the military realm, this gap has been partially filled by state actors, such as the US Arms Control and Disarmament Agency (ACDA), as well as by non-state actors like the Stockholm International Peace Research Institute (SIPRI) and the International Institute for Strategic Studies (IISS). These actors collect and publish considerably more comprehensive military spending data than does the UN.

The absence of a globally adopted database affects the usefulness of military expenditures as a comparative measure. States calculate and present military spending in various ways. The small number of key nonstate and state actors that aggregate and provide military spending data mitigates this situation somewhat by creating common reference points for comparison. Their data series nevertheless differs significantly in the numbers provided for the military expenditures of individual states.

In addition to the broader issue of source availability, there are two  factors that account for the variations in the comparative data. The first involves the use of different definitions for military spending. Whereas SIPRI uses “military expenditures” data in ranking the top military spenders quoted above, the IISS relies on “defense budget” figures. Military expenditure figures, which include military-related expenses often contained in other budgets (e.g., military pensions), generally exceed defense budget figures. This discrepancy makes it even more difficult to assemble comparable figures.

Non-state actors generally qualify their military expenditure figures by indicating those states – China and Russia usually among them – for which estimates had to suffice due to limited available information. Military Balance 2018, for example, gives only an estimate for China’s military spending in 2016 ($197 billion) and indicates that the figure for 2017 is “not known.”

The second factor is the use of different currency conversion mechanisms. The aforementioned WMEAT data demonstrates that, most notably for China and Russia, purchasing power parity-based conversion mechanisms result in significantly higher military spending figures than conversions based on market exchange rates.

Although worthwhile as a political goal, instituting an official, comprehensive military spending database that employs a commonly accepted definition of the measure faces substantial practical hurdles – witness the history of the UN Report on Military Expenditures.

A considerable number of states remain reluctant to fully submit information on their military spending within a joint comparative framework to an international body. Even if established, however, such a database would only diminish, not eliminate, the ambiguities that mark the comparison of military expenditures.

Because measuring military spending is never a purely technical issue, ambiguities will persist. Such measurement is inherently political and, as a result, is regularly subject to partisan disputes.

The WMEAT data quoted above shows how simply switching from one currency conversion mechanism to another allows for rather varied interpretations of the current state of great power competition between the US, China and Russia. Calculated one way, China and Russia combined spent $281.7 billion compared to the US, which spent $641 billion. Calculated the other way, China and Russia combined can account for a military expenditure of $561 billion. For those who advocate increased US military spending, the second interpretation is far more appealing, while official Chinese statements prefer different relative measures and stress that China’s military spending is lower than that of other major countries, both as a percentage of GDP and in terms of per capita military expenditure.

It is in light of this ever-present possibility of politicization that the seemingly unsatisfactory situation of a lacking global standard, with a variety of data providers and data series on military expenditures, also has its merits. Although it allows proponents of different political agendas to more easily cherry-pick the figures that best fit their arguments, the existence of independent data providers such as the IISS and SIPRI acts as a critical check on the political uses and abuses of data on military expenditure. The independent data providers produce alternative reference points that allow critical scrutiny of arguments about military spending and capabilities advanced in national and international political debates on security politics.

That said, attempts to promote official global standards and databases for the comparison of military expenditures and capabilities via international bodies should not be dismissed as a futile exercise. These negotiations help states better understand the comparative measures through which other states assess regional and global military developments. The likelihood of destabilizing misperceptions can thus be decreased. Moreover, globally accepted standards and data would facilitate future arms control negotiations by demonstrating that, and how, problems of comparability can be overcome. Past arms control negotiations provide ample evidence that problems of comparability are often exploited as a convenient excuse for states that lack the political will to actually realize arms control and arms-reduction proposals.

MATHIAS ALBERT
is a professor of political science at the University of Bielefeld.

THOMAS MÜLLER
is a member of the sociology faculty and analyst at the Institute of World Society Studies at the University of Bielefeld. 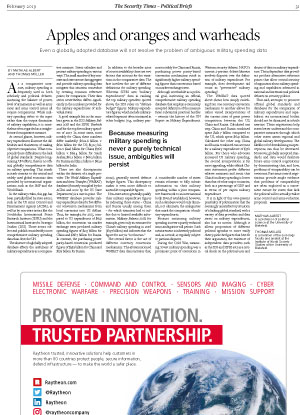