India sees the Belt and Road Initiative for what it is: evidence of China’s unconcealed ambition for hegemony

For 73 days between June and August 2017, Indian and Chinese troops were locked eyeball to eyeball over a small strip of land marking the tri-junction between India, Bhutan and China: the Doklam Plateau. The clash was ostensibly triggered by Chinese road construction activities around disputed territories. But military tensions at Doklam are only the symptom, not the cause of conflict. The standoff itself is the naked manifestation of a long simmering conflict over regional primacy. India sees itself as an indispensable actor in influencing the future of the Asian century. China, on the other hand, is intent on shaping a unipolar Asian order that will be defined by deference to the Middle Kingdom and its increasingly imperial rulers.

The Belt and Road Initiative (BRI), officially unveiled in 2013, is perhaps the most visible demonstration of China’s intention. The ambitious connectivity project – straddling two oceans and implicating three continents – seeks to create a cohesive economic and political arrangement across Eurasia and Africa. Within these regions, Beijing has devoted resources towards building ports, energy pipelines and railways, along with investing in close political relationships and military cooperation. For China, the BRI is a shining symbol of its leadership. At a time when Western powers are turning their focus inward, the BRI is billed by China as its commitment towards globalization and integration. Taken at face value, such grand projects are not novel in ambition, nor should they be rejected for their intent.

However, the BRI as it stands today is unique in its opacity. Embedded in its strategy is an agenda that ultimately serves only one actor – Beijing. The 65 nations that have signed up for the BRI are relatively small, low-income and in urgent need of infrastructure finance. By their short-term calculus, the promise of China’s seemingly generous loans and development partnerships outweighs concerns over political independence, economic stability, environmental degradation and sovereignty. When China hosted its BRI summit in May 2017, historians were hard-pressed to miss the symbolism of world leaders stepping up to shake hands with President Xi – a 21st-century vision of the Middle Kingdom’s ancient tributary system. Through debt, political influence and outright coercion, the BRI is a roadmap for structural servility to Beijing.

Countries with agency and regional heft are not likely to succumb to this lure. Yet India sees many of its neighbors straddled with bad loans and white elephant projects, which China uses for strategic leverage. Sri Lanka’s Hambantota Port, over which China now enjoys a 99-year lease, is perhaps the most obvious example of Beijing’s “debt-trap diplomacy.” New Delhi is also acutely aware that states in the region are slipping into China’s orbit, making it difficult for them to criticize Beijing. ASEAN’s inability to develop a cohesive response to China’s maritime aggression in the South China Sea underscores this risk. Further, India views China’s investments in Kashmir as a violation of its sovereignty, while it sees other regional projects as a part of China’s “string of pearls,” which are intended to limit India’s rise as a global power.

For these reasons, aspiring “leading powers” like India see the BRI for what it is: an exercise in hardwiring influence. As the only major country that refused to attend the BRI summit in May, India cogently argued that connectivity in Asia must be consultative, and guided by transparent financial guidelines, principles of good governance, internationally recognized environmental and labor standards, and respect for sovereignty. For a country that has always preferred multipolarity and multilateralism, both globally and regionally, acquiescing to Pax Sinica was never truly an option.

The India-China relationship is thus coming to signify a contest for the future of Asia, as well as the world at large. At issue is whether nation states that exercised their hard-won right to self-determination and democracy will now be forced into a client-satellite relationship with Beijing as its economic dominance continues. Over the past seven decades, the international liberal order – as it is often called – was carefully crafted with the intention of promoting free markets, rule of law and democracy. Leadership with Chinese characteristics, discernable most visibly through the BRI, is ominously lacking in these qualities. China has used its trade relationships to silence political opposition, bribed its way towards closer diplomatic ties and militarily coerced many of its neighbors. In each case the message China sends is clear: Accede to Chinese interests and enjoy good relations, or resist and face fury.

This effort to sabotage the relevance and the principles of the liberal international order has prompted the concept of a “free and open Indo-Pacific.” First made popular by the United States when Secretary of State Rex Tillerson visited India in October 2017, the geographical definition of this space, and the values that must define it, has since caught on in the strategic calculus of several regional powers. The resuscitated Quadrilateral Security Dialogue – a partnership of four maritime powers, including India – has coalesced around this region with the vocal intention of providing a democratic bulwark against China’s unconcealed ambition for hegemony. As a result, the Indo-Pacific, which spans the West Indian Ocean and stretches towards the Eastern Pacific, is now primed to become the battleground for the future of the liberal order.

Three imperatives will guide this contest: norms, connectivity and security. Regional democracies will have to invest considerable resources and synergize their own connectivity initiatives to address the region’s burgeoning infrastructure finance demands. They will also have to develop political and military partnerships to ensure that states in the region are capable of resisting Chinese pressure. However, a democratic alternative by definition cannot be exclusive; it must be capable of accommodating Beijing’s projects and security concerns as long as they abide the well-established principles of international law. Only by doing so will the idea of a free and open Indo-Pacific provide a viable and attractive rules-based alternative to the autocratic strain of the BRI.

The India-China relationship is ultimately defined by the differing worldviews of both actors. From China’s perspective, India – whether through diplomacy, coercion or force – must understand its place in a hierarchical Asian order that pays obeisance to Beijing. However, according to a famous Chinese adage: “One mountain cannot contain two tigers.” Nonetheless, as a confident democratic power, India will increasingly exercise its heft to shape the world around it, without being browbeaten by the dragon. The competition over values, norms, ethics and influence, both within Asia and around the world, will continue to exacerbate tensions between India and China. The standoff between the two countries over the Doklam Plateau – their most serious border conflict since the 1962 – was likely a prologue for what is to come.

SAMIR SARAN
is vice president of the Observer Research Foundation in New Delhi. 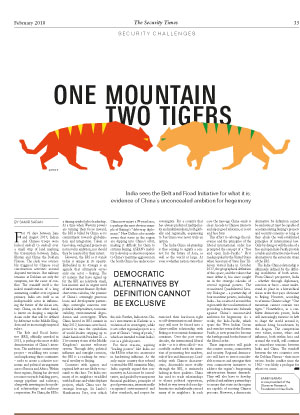