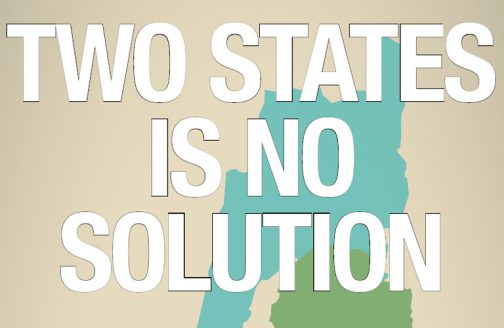 First, the thesis: The twostate solution is not a solution. It only creates new problems. “Israel here, Palestine there” sounds good, and was recently repostulated by the United Nations, Barack Obama and John Kerry, but it won’t bring about the desired peace.

The goal: Individual and collective self-determination.

The premises: The configuration of states in the Middle East is crumbling. Contrary to what many choose to believe, individual politicians are not the cause. They come and go. The problem remains because it’s a structural one. The ever-so-popular personalistic approach must give way to structural understandings. Most Middle Eastern states are intellectual or artificial constructs. The reason is that political geography, i.e. national borders, is not congruent with political demography, i.e. populations. Conflicts arise and exist where demography and geography are incongruent.

The problem lies in demographic facts. The population of the Jewish state, Israel, is around 80 percent Jewish and around 20 percent Palestinian Muslim. This demographic breakdown will never be reconciled with the Jewish character of the state. The “Israeli Arabs” live predominantly in Galilee but even there, at around 50 percent of the population, they do not constitute a majority. And in Galilee and the “Little Triangle” northeast of Tel Aviv, they live not only in their own cities and settlements, but dispersed throughout other communities as well. There are also “mixed” Jewish-Arab cities like Jaffa, Lod, Ramla, Acre and even Nazareth. And now the idea of an areal and spatial disentanglement? How and by whom should this be carried out without creating more violence?

Since Israel’s 2005 withdrawal from the Gaza Strip, its population has been 100 percent Palestinian. The “Land for Peace” formula has not come to fruition there, as this surrender of land to the Palestinians has brought no peace, neither with Israel nor among Palestinians. After a short civil war, Hamas took power in 2007 and expelled their Palestinian “brothers” in the Fatah movement.

The population of the West Bank (including East Jerusalem) is around four-fifths Palestinian and predominantly Muslim. It is roughly one-fifth Jewish-Israeli. Around two-thirds of the Jews inhabiting the West Bank live in tower blocks in the north, east and south of East Jerusalem. To call them “settlers” is absurd, as settlers normally farm land and do not rent or own apartments like in French banlieus, Berlin’s bleak Märkisches Viertel or Neuperlach Süd in Munich.

The existence of two states would automatically beg the question: Can a minority remain where it is? If not, Israel would be “free of Arabs” and the West Bank “free of Jews.” Even without the allusions to Nazi Germany, it would be completely unethical, not to mention the fact that each “transfer” would only be feasible through force, which would amount to a sort of ethnic cleansing.

This option can thus categorically be ruled out. For both moral and functional reasons, it cannot be expected that at any point in the future the state of Palestine would treat the Jewish settlers, i.e. its “archenemies,” with any more civility than it did its own “ethnic comrades” in the Gaza Strip in 2007.

To avoid a Palestinian-Jewish bloodbath after the founding of “Palestine,” international troops could be necessary to establish a safety buffer for both sides. But is that a realistic scenario? Perhaps with the rather isolationist Trump administration and US society in general. And Europe? In 1939–40 it was “Mourir pour Dantzig?” Today it’s “Why die for Palestine- Israel?” The answer is the same today as it was back then: “No thanks!”

UN troops would be conceivable. Would they operate just as “successfully” as in Congo or the Central African Republic, where they have since become more of a problem – e.g. looting, killing and raping – than a solution?

Within Palestine the question has been asked: Would the transition of the West Bank plus the Gaza Strip to “Palestine” proceed peacefully? Considering the experiences of the civil war in the Gaza Strip between Hamas and Fatah between 2005 and 2007, people have their doubts, especially since the Islamic State (IS) has become an additional, powerful, anything-but-moderate force in the region.

Territorial continuity is a standard characteristic of states, and it just doesn’t exist between the Gaza Strip and the West Bank. Bridges and streets and tunnels can be built to connect them? A new version of the Polish Corridor in the Middle East? Please. Almost everyone overlooks the fact that around 70 percent of Jordanian citizens are Palestinian. And whether or not people like to admit it, over the course of the Arab revolutions, Jordan will one day become East Palestine, and with no help from Israel. The best-case scenario is a nonviolent transformation of Jordan into East Palestine.

Conclusion: The overlapping of demography and geography in Israel and in the West Bank means that self-determination can be granted neither to Jews nor to Palestinians, but only to both collectively. Self-determination is possible only personally, not territorially.

The solution: The horror scenarios can only be avoided through a combination of federal and confederative structures, which would ultimately subdue the explosive issue of borders.

And the cornerstone of any solution would have to honor the following premise: No matter where Jews or Palestinians may live, they will have their own democratically legitimated representation and institutions.

The Jewish state of Israel would widen the self-determination of Palestinian citizens by way of an Arab chamber. A mediation committee would regulate dissent between the Jewish and Arab chambers.

The Federal Republic of Palestine would comprise the federal states of West Bank-Palestine (West Bank) and East Palestine (Jordan and Gaza Strip).

The demilitarized state of West- Bank-Palestine would also have an Arab chamber and a Jewish chamber, in addition to a mediation committee.

The states of Jordan and Gaza Strip would become the federal state East Palestine, also with its own chamber.

The Federal Republic of Palestine and Israel could and should form a commonwealth (confederation) for economic and other functional reasons.

New thinking is needed not only for the “classic” case of war and conflict in Israel-Palestine, but also for Syria, Iraq, Turkey, Afghanistan, Mali, Congo and many other states where political demography and political geography are incongruent.

A version of this article appeared in print in February, 2017, with the headline “Two states is no solution”.

Historian and journalist Michael Wolffsohn is the author of the books, Zum Weltfrieden (On peace) and Wem gehört das Heilige Land? (Who owns the Holy Land?).