Who will run the world: A new global order is in the offing 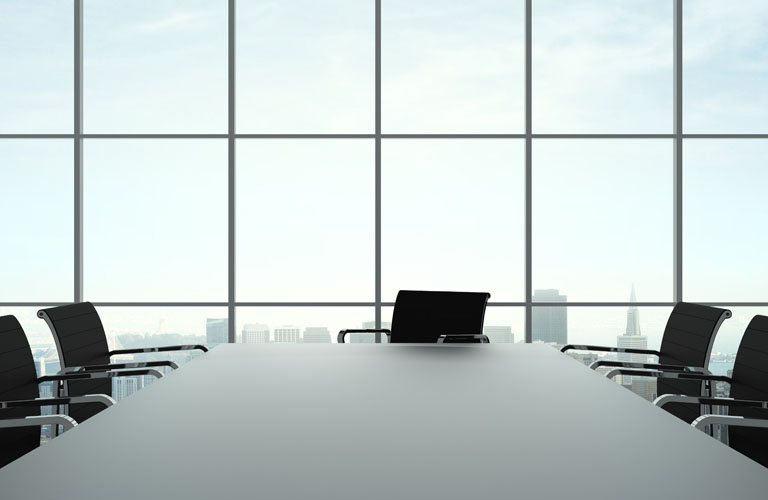 The year 2019 was ushered in under clouds of gloom and doom. The current global order is, in fact, a frightening global disorder. Not only is the world economy weakening, as tariff conflicts herald a pernicious trade war, but the certainties of international cooperation are also waning and vanishing in the political realm, as America’s retreat from global leadership and the rise of Xi Jinping’s China upend the prevailing power pattern of the past 70 years. Geopolitical conflict has become thinkable once again.

The old world order is coming to an end. As Richard Haass argues, even the best-managed orders eventually do. The president of the Council on Foreign Relations fathoms the causes of disarray and decline in the latest issue of Foreign Affairs. “The balance of power underpinning [the existing order] becomes imbalanced,” he says. “The institutions supporting it fail to adapt to new conditions. Some countries fall, and others rise, the result of changing capacities, faltering wills and growing ambitions. Those responsible for upholding the order make mistakes both in what they choose to do and in what they choose not to do.” It is a perspicacious analysis.

Take the United States. The problem is not primarily President Trump’s chaotic management, his boorish behavior or even his disregard for all values not expressed in dollars. It is his abdicating the leadership of what used to be called the free world as well as his brazen disrespect for allies, for international institutions and for taking the interests of others into account. Disruption of the old order, his Secretary of State Mike Pompeo told the recent World Economic Forum in Davos via video, was a “positive
development” because “nations matter.” Other nations, however, don’t seem to matter.
In this spirit of reckless unilateralism, Trump continues to shed America’s global commitments. He withdrew from the Trans-Pacific Partnership (TPP), the Paris Climate Agreement, the Joint Comprehensive Plan of Action (JCPOA) – commonly known as the Iran Nuclear Deal – and, most recently, from the INF arms control treaty with Russia. Having called Europe a “foe” and welcomed the EU’s breakup through Brexit, he has also repeatedly questioned the US commitment to defend NATO partners; reportedly he has privately told aides that he wants to leave the “obsolete” alliance. But dominating the world by fiat, whim and fits of temper can have only one effect: the further unraveling of the complex
interdependence of the West.
Denouncing all the politics that made America great comes at a time when, after a century of US global supremacy, a powerful, ambitious, assertive, even aggressive rival has appeared on the scene: a rejuvenated, strengthened, emboldened China. Xi Jinping seeks to place the People’s Republic in the center of the world stage and to achieve leadership status in the political, economic, technological and military fields. Time and again, Xi repudiates spheres of influence as well as hegemony, yet his practical policies tell a different story. His landmark Belt and Road Initiative (BRI) – the new Silk Roads spanning the world – realizes infrastructure projects in the developing world; it is financed by a fund totaling one trillion dollars. Participants are forced to sign an MoU promising to support China’s core interests (e.g. Taiwan, South China Sea).
This kind of monetary imperialism creates spheres of influence not merely in South East Asia and Central Asia, but also in Africa and Latin America. And while Xi shies away from open confrontation with the West, he aspires to achieve dominance in the Indo-Pacific region by forcing out the US. The annexation of the Paracel and Spratly Islands in the South China Sea and China’s land grab in Sri Lanka show that he is serious about it.

Beyond that, Xi Jinping certainly wants to compete with the United States globally. Harvard’s Graham Allison has drawn attention to the Thucydides Trap, named after the Greek historian who had written that the Peloponnesian War (431–404 BC) was caused by “the growth of Athenian power and the fear that this caused in Sparta.” Allison does not exclude the possibility of war between the rising power, China, and the established power, the US. This may be an overly pessimistic view. Yet even if Donald Trump and Xi Jinping manage to settle their trade conflict during their next meeting at the end of February, the geopolitical rivalry between the US and the People’s Republic of China is not going to end. It will be the dominant element of international politics in the 21st century.

In this perilous situation, Europe is a helpless and clueless bystander. It finds itself adrift as it struggles with Brexit and disputes over sovereignty and migration. The Brexit debate has sapped the strength of the EU, its cohesiveness and its deeply felt conviction that sticking together is the only chance for its members to prevail in the emerging world of tomorrow. In the United Kingdom, seemingly unable to clinch its divorce from the European Union, the
venerable system of parliamentary democracy has been badly discombobulated; the failure of representative government in Westminster bodes ill for democrats, but will bring cheer to autocrats all over the world.

In France, the implosion of the traditional party system has led to near-ungovernability. President Emmanuel Macron’s lofty vision of a “European renaissance” and his new start in French politics have fallen victim to the protestations of the Yellow Vests.
In Germany, Chancellor Angela Merkel’s tenure is drawing to a close; after 14 years at the helm, she is on a glide path out of power. At the same time, the new government coalition in Italy, political blockades in the Netherlands, Belgium, Scandinavia and Spain as well as authoritarian tendencies in Poland, the Czech Republic, Hungary and Romania are reinforcing a populist dynamic and a formerly unknown polarization of Europe’s societies.

Right-wing anti-European parties – including the Alternative for Germany (AfD) – may capture up to 150 of the 705 EU Parliament seats in the elections this May. This is likely to create substantial complications. In addition, the EU will be absorbed with replacing its complete leadership. It must find successors for Commission President Jean-Claude Juncker, Council President Donald Tusk, High Representative for Foreign Affairs Federica Mogherini, for the president of the EU Parliament as well as for Mario Draghi, president of the European Central Bank. This means that Europe will continue its vacuous navel-gazing. It is hard to believe that the new Treaty of Aachen augurs a new era of European integration. The fracturing of the EU and the weakening of Washington’s commitment to NATO occur at a moment when the West faces a daunting array of challenges. One challenge is Russia. Putin’s annexation of Crimea and his support for the Donbass separatists ended a period of lukewarm peace in Europe – much in the same way that the Crimean War (1853–1856) ended the Concert of Europe, which had maintained peace on the continent since the Napoleonic Wars. The Ukrainian crisis will likely smolder on for some time –until Putin or his successor realizes that Russia is punching far above its weight, its quasi alliance with China will not solve its economic stagnation and that it will soon find itself evicted from China’s Central Asian near abroad. Moscow may then repivot to Europe as its modernization partner.

And there are numerous other challenges. The Middle East will remain a cockpit of conflict, aggravated by the intensifying confrontation between Saudi Arabia and Israel and Iran. In Africa, a continent forever hovering between hope and horror, the doubling of its population within decades will exacerbate the development problems already bedeviling it while also dangerously increasing the migration pressure on Europe. Terrorism, the violence of religious fundamentalism, nationalist militancy, cyber aggression and the security consequences of climate change will be the hallmarks of the 21st century. And it is not merely state actors that are likely to pose serious threats to order and peace in the world, but also non-state actors from drug cartels to hacker gangs profiting from the progress of technology in the digital age.
The rise of new powers abroad and the spread of authoritarianism around the globe are worrisome enough. However, both the international liberal order and the constitutional order of our liberal democracies are threatened just as much by the rise of populist, nativist and illiberal nationalism in the West, nourished by a disturbing growth of inequality in our societies. As voiced by Elizabeth Warren, the Democratic US Senator from Massachusetts: “Around the world, democracy is under assault. Authoritarian governments are gaining power, and right-wing demagogues are gaining strength.”
Warren’s analysis is disheartening, and we should all take her admonition to heart: “If we do not stand up to those who seek to undermine our democracy and our economy, we will end up as bystanders to the destruction of both.” Indeed, failing to do so would not only jeopardize the stability of our polities, but their security as well.

“Who Will Run the World?” is the title of the latest issue of Foreign Affairs, and it is a good question. The year 2019 will be a hinge year, replete with inflection points in global politics. At this moment in history, the West needs strong and capable leadership. Unfortunately, there are no Washingtons, Castlereaghs, Metternichs or Bismarcks anywhere to be seen, no Trumans, Churchills, Adenauers and deGaulles capable of laying the groundwork for a new order. It is thus all the more urgent that our societies produce leaders who are up to the task of guiding us out of the tumult of international chaos and domestic mayhem.
If in this we fail, 2019 will be just another year of jostling and jockeying for advantage. Another lost year.

THEO SOMMER
is the executive editor of The Security Times. 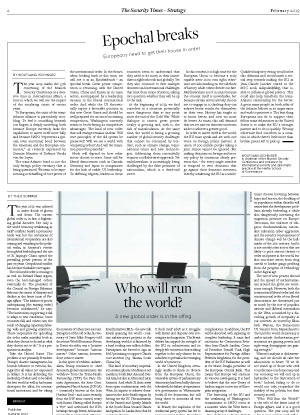