How the new grand coalition, once formed, will pursue Germany’s European and foreign policy 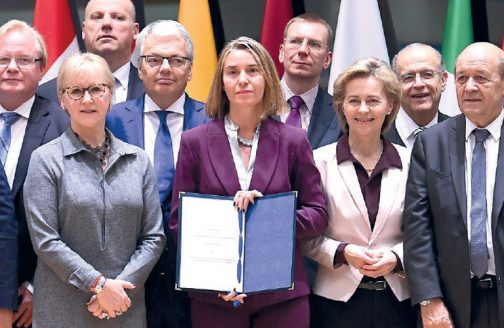 In recent years, certainties within international politics have become fewer for Germany. European integration appears more fragile due to growing social disparities within the EU; Brexit and nationalist trends across most of Europe are also playing a role. At the same time, international policy regimes and fundamental principles such as international law, multilateralism and the universal validity of human rights have come under pressure. The threat of a new arms race and efforts by large powers to project their influence imply additional risks and demand new political responses.

Along with our partners, we face the great challenge of preventing a return of war to Europe and its neighboring countries, and of averting Europe-bound refugee flows triggered by civil war, climate change and undemocratic and unconscionable living conditions. Even aside from these issues, sustainable German and European development policy has an essential part to play.

The new German federal government will seek to help shape this period of upheaval in a positive way – in the direction of peace and security, freedom and human rights, and a fair globalization. Especially given the era’s new risks and shifting global power relations, Germany’s foreign policy will give new impetus to its principles on the global political stage. This means that international cooperation, dialogue and multilateralism, and firm commitments to the European Union and the transatlantic alliance are and will remain the cornerstones of Germany’s values and interests.

More than ever, Europe as a normative and political foundation of Germany’s foreign policy stands at the center of this strategy. Only together do Europeans have a chance to preserve their common values and interests in a globalized age. Strengthening the European Union internally and externally is thus the key political task for the new federal government. Working jointly with France, Germany will introduce initiatives for a strong, democratic, competitive and social Europe.

This includes resolute reform of the Economic and Monetary Union, with an investment budget for the euro zone in lieu of a one-dimensional policy of austerity. Moreover, the fight for a European social compact and against youth unemployment will be carried on as vigorously as the fight against international corporate tax evasion.

At the same time, the EU must substantially improve and expand its competences as an international political actor. For the new German government this means that Permanent Structured Cooperation (PESCO) with respect to the European Defense Union and the prospect of a European army is as much a focus as expanding EU civil structures for crisis prevention and conflict resolution. In parallel, the federal government will actively support further expansion of European development cooperation through a coherent Africa strategy.

Working with its neighbors, Germany will take on more responsibility in the future, including within the context of its United Nations, EU, OSCE and NATO partnerships and alliances. The foreign policy of its coalition partners deems crisis prevention, humanitarian aid and development cooperation as important as a capable and well-equipped Bundeswehr. The federal government will therefore allocate appropriate investments to both the security and civil-sector policy areas. Moreover, for the first time in the history of the Federal Republic, the coalition partners have agreed that additional funds in these two areas will be given investment priority in equal proportions.

With this approach, the new federal government will stay the political course set under Chancellor Angela Merkel by the Social Democratic foreign ministers Steinmeier and Gabriel. This includes new initiatives for arms control and disarmament aimed at preventing a conventional and nuclear arms race on our continent. The coalition agreement also lays out a limitation on arms exports, a tightening of arms-export directives, a ban on the export of small arms to third-party countries and a broad arms-export ban for countries directly participating in the war in Yemen. It is hoped that other governments will take up and support these initiatives.

A fair globalization in line with the UN’s 2030 Agenda for Sustainable Development remains a goal of German foreign policy. In order to foment a just and sustainable world society, the Grand Coalition will further expand development cooperation particularly in Africa, with the aim of overcoming poverty and hunger and supporting the emergence of new opportunities. Furthermore, Germany will advocate binding standards for social issues, human rights and the environment in all EU trade, investment and economic-partnership agreements. In so doing, Germany will assume a leading role in establishing a fair EU trade policy. At the same time, the National Action Plan for Business and Human Rights (NAP) will be consistently implemented in its entirety.

If formed as expected, the new federal government will live up to and embrace its international responsibility.

The conundrum of the Washington-Tehran stalemate 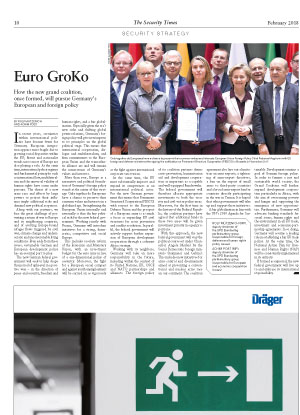