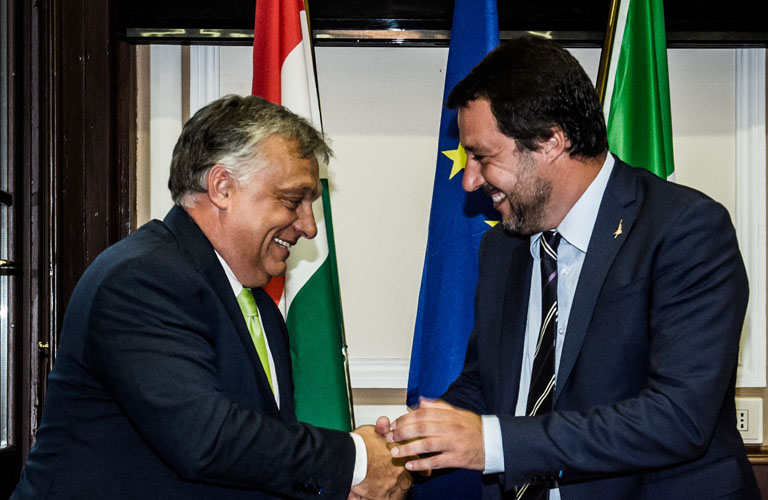 The Munich Security Conference has grown accustomed to ranking the security threats to the West: Islamist terrorists, Russian revisionism or the global ambitions of China’s big data dictatorship. But today, the most critical challenges come not from outside the West but from the political dynamics within.

In 2019, they actually derive from one of the most unlikely sources: the elections to the European Parliament. Traditionally, these elections bear almost no relevance to trans-Atlantic security. In spite of their name, European elections were predominantly national affairs with low turnout and even lower stakes. But this year could actually be different on all of these fronts.

First, rather than being merely a national story, there is a transnational element to European elections in 2019. Viktor Orbán and Matteo Salvini, assisted by the American alt-right representative in Europe, Steve Bannon, would like to turn these elections into a European answer to the Trump revolution that has afflicted Washington. Rather than fighting it on purely national grounds, they aim to turn it into a referendum not just on the future of migration, but also on the idea of an outward-looking and cohesive European Union. As such, they are creating a new kind of Western counter-alliance – one that challenges many of the ideas inherent in the traditional project of the West. They share a vision of what Mark Lilla recently described as “social organicism,” which pushes back against what it sees as the uprooted, elitist and cosmopolitan vision of the West and its sister project, European integration.

Orbán and Salvini are working with Bannon in trying to create a federation of different strands of European populism – anti-austerity from the left, anti-migration from the right. Rather than talking about destroying the EU, they are trying to show how they would reshape it into a Europe of nationalist states.

Second, it just so happens that, as with Trump, all these parties have ties to Russia, and they all share a skepticism of trade and multilateral institutions. This is how they seek to mobilize people who traditionally do not vote in European elections – and why, in turn, there may be much greater turnout than is traditionally the case. The 2019 elections could shape up to be a big challenge for the established parties – such as Emmanuel Macron’s La République En Marche and Angela Merkel’s Christian Democrats.

Third, the stakes are much higher this year. If the pan-populist project succeeds, Orbán, Salvini et al. could secure a blocking minority in the European parliament, or, even worse, form an Austrian-style coalition between the right and center right. Rather than Brussels being a focal point for EU institutions and their efficient operation, the pan-populist alliance could get their wish by blocking or delaying the nomination of EU commissioners, making trade deal ratification less likely and preventing the Commission from pursuing Article 7 on rule of law procedures. Populists could actually create the conditions for their fear-mongering populist prophecy: a dysfunctional Brussels, from which they must then seize control from.

Most worrying is that, while euroskeptic forces are limbering up for a momentous political year, their mainstream counterparts are not. They are, in fact, in danger of falling into the trap the populists are laying for them – by accepting the battle lines of a fight between globalism and patriotism that will almost certainly help bring the populist forces a higher turnout and a degree of unity that their disparate agendas do not deserve. Everything is still up in the air, but avoiding Hillary Clinton’s fate on election day 2016 will require that pro-Europeans accomplish three things:

First, they must counter the image, painted by Orbán and Bannon, of elitist, pro-status quo and pro-Brussels cosmopolitans. This means developing a critique of the Brussels institutions and an alternative agenda of change so that people are not forced to endorse the many elements of dysfunction and unfairness that have characterized European integration over the last few years. Macron instinctively understands that the next wave of the European project cannot be about ripping down barriers between countries, but rather should focus on de-risking interdependence by showing how to help those disadvantaged by free movement, free trade and the single currency. But his rhetoric of a “Europe that protects” has not yet been embodied in a clear and convincing political program.

Second, if they aim to polarize the debate, the pro-Europeans must do so from a position where they have a majority of public opinion on their side and where they are likely to actually win over voters rather than shoring up support among their more ideological base. The worst they could do would be to allow for a debate that juxtaposes an open Europe with a closed, nationalist Europe. Instead, pro-Europeans must earn the right to be listened to by confronting dysfunctional elements in the EU – and finding wedge issues on the right. For example, they should ask Salvini’s supporters if they support Orbán’s vision of keeping migrants in the countries where they land and ask Orbán’s supporters whether they support the Lega’s idea of spreading refugees around EU member states.

Third, they must find compelling reasons for voting that will mobilize people not just through a purely moralist campaign against “evil populists.” If they fail to do so, the political dynamics that have blighted Washington could catch on in Brussels. This risks creating an alternative trans-Atlantic relationship. Rather than a West united around the defense of the liberal order, as championed by John McCain, Joe Biden and Barack Obama in the US and Angela Merkel, Emmanuel Macron and John Major in Europe, we could see an illiberal axis with Salvini and Orbán on one flank and Trump, Bannon and John Bolton on the other.

MARK LEONARD
is director of the European Council on Foreign Relations, which is launching a New European Security Initiative backed by several European governments and companies.

United we stand,divided we fall 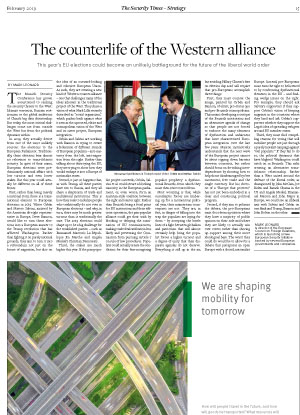