The conundrum of the Washington-Tehran stalemate 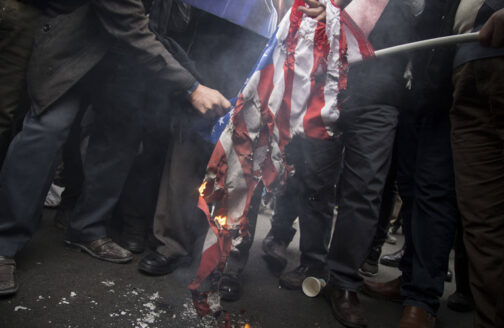 The United States and Iran have been on a predictable collision course since the Trump administration withdrew from the Joint Comprehensive Plan of Action (JCPOA) in May 2018. The drivers of this heightened tension are two fundamentally clashing and self-reinforcing approaches: Washington is convinced that a policy of “maximum pressure” will prompt Iran to succumb to its demands – and should such pressure fail, the US response should apply even greater pressure. Conversely, Tehran believes that the most effective reaction to pressure is counter-pressure – a policy of calibrated escalations on the nuclear and regional fronts to demonstrate it will not fold under duress, but instead raise the stakes.

The dangers of this standoff were fully evident in late December 2019 and early January 2020, when the two sides came to the brink of war after the US killed Major General Qassim Soleimani, head of Iran’s Islamic Revolutionary Guard Corps’ elite Quds Force. A more costly confrontation was avoided this time, but the underlying dynamics that led to the precipice remain unchanged.

The burden is now on European and other third-party mediators to seek a tactical détente between the two rivals that reduces regional tensions and averts a renewed crisis over Iran’s nuclear program.

Since pulling out of the nuclear agreement, the Trump administration has articulated a sweeping set of demands for what should take its place. The list is long, ambitious and wholly unrealistic. It includes, inter alia, an end to all uranium enrichment, ballistic missile proliferation and Iranian support for its various local allies and partners across the region. Unilateral US sanctions have served as the primary tool for securing these concessions and succeeded in subjecting the Islamic Republic to considerable financial strain, in particular by precipitating a substantial drop in Iran’s vital oil exports.

But the sanctions have otherwise failed. They have so far produced neither the greater regional stability Washington seeks nor the more stringent nuclear constraints it has targeted. Instead, they have resulted in heightened tension and an Iranian nuclear program increasingly unshackled from the JCPOA’s key restraints. Moreover, and despite episodic and at times serious unrest, the Islamic Republic remains in full control at home.

For the first year of the US “maximum pressure” campaign, Iran’s approach was to wait it out and hope that the JCPOA’s remaining parties – France, Germany, the UK, Russia and China – could muster the economic dividends at the core of the agreement’s quid pro quo. That strategy began to shift in May 2019, as the burden of US sanctions weighed more heavily, and Europe failed to fashion a financial lifeline. Facing what it considered an intolerable status quo, the Iranians adopted their own version of “maximum pressure”: provocations on the regional and nuclear fronts to underscore the fact that Washington’s siege will not be met without a cost, and to prompt greater urgency toward stabilizing the JCPOA by means of an economic reprieve.

From Tehran’s perspective, the nuclear and regional escalations are thus two sides of the same coin. They are gambits aimed at breaking the financial stranglehold placed by sanctions, which have in turn fueled economic and political discontent within Iran and strengthened the hand of hardliners for whom the JCPOA specifically, and international engagement more broadly, were strategic mistakes foretold and now seemingly fulfilled. But just as Washington’s approach has failed to yield Iranian concessions, Iran’s brinkmanship failed to deliver a favorable breakthrough.

At the regional level, tensions have risen steadily over the past year. Attacks against oil tankers in the Gulf in May and June preceded the brazen attack against Aramco’s Abqaiq-Khurais facilities in Saudi Arabia in September. Iran has denied involvement but is suspected in each of these incidents.

October saw the beginning of an uptick in rocket attacks against Iraqi military bases hosting US and other international troops, one of which, on Dec. 27, resulted in the death of a US contractor in Kirkuk. Events then quickly took a turn for the worse. The US struck bases of the Iran-backed Iraqi paramilitary group, Kataib Hezbollah, claiming it was responsible for the Kirkuk operation. This led to a mob attack against the US embassy compound in Baghdad. Just a few days later, the US killed Major General Qassim Soleimani – one of the Islamic Republic’s senior military officials and mastermind of its network of proxies and allies across the Middle East. On Jan. 7, Iran responded with a barrage of missile strikes against Iraqi military bases, injuring 64 US soldiers at the Ain al-Assad base.

While the guns have since gone silent, that salvo is unlikely to be the end of Iran’s or its allies’ response, and the possibility of further direct or indirect retaliation against US or allied targets remains significant.

Meanwhile, Iran has been steadily and methodically breaching its JCPOA commitments: breaking the 300kg cap on its stockpiles of enriched uranium, upping enrichment rates beyond the deal’s 3.67-percent limit, activating advanced centrifuges, reviving enrichment activities at its bunkered Fordow site and running more centrifuges than the deal allows. However, in key respects there may be less to these breaches than meets the eye. For example, uranium enrichment levels are still well short of the pre-JCPOA 20-percent level, and rigorous inspections by the International Atomic Energy Agency continue apace. In other words, Iran has been staggering its non-compliance with the likely intent of jolting greater efforts to salvage the agreement, rather than abandoning the deal outright in pursuit of weapons capabilities.

Nevertheless, the JCPOA’s three Western European signatories concluded they could no longer act as if the deal were still respected by Iran and, on Jan. 14, launched the dispute resolution mechanism (DRM) that could see the case eventually referred to the UN Security Council. Should that transpire, and the pre-JCPOA international sanctions return to force, it would herald the agreement’s collapse. The consequence would be rolling the clock back a decade and reviving discussions on whether military action by the US and/or Israel is necessary to contain a nuclear program the JCPOA had successfully kept in check.

With the region on a knife-edge, the nuclear deal increasingly at risk and the prospects for direct diplomacy between Tehran and Washington looking increasingly dim, third-party intervention may well be the only way to break the impasse between the two sides. Efforts by French President Emmanuel Macron to fashion a US-Iran détente at the UN General Assembly in September 2019 stumbled at the last minute, but they revealed the contours of a potential arrangement: economic reprieve for Iran in exchange for Tehran’s compliance with the JCPOA and regional de-escalation.

Soleimani’s killing likely precludes the already unlikely presidential summit the White House was keen to showcase and thus reduces the scope of what could be agreed upon. But a more modest arrangement remains plausible. In particular, more vigorous European steps to operationalize the Instrument for Support of Trade Exchanges with Iran could buoy trade, be supplemented through credit lines for Iranian humanitarian goods and go hand-in-hand with a resumption of Iranian adherence to the deal.

At a minimum, this would buy time, avert a UN showdown and perhaps press the pause button until the US presidential elections in November. Although Soleimani’s killing has significantly soured the atmosphere, Iran and the US might also seek to build on the successful exchange of detainees last December and pursue additional discussion on releasing US and other foreign nationals held by Iran on highly dubious charges.

Now that the E3 (France, Germany and the UK) have triggered the DRM, they will likely be pressured by the US to take the case to the Security Council as quickly as possible, not least with the end of a UN arms embargo looming in October, unless UN sanctions are re-imposed. That makes it all the more imperative for the E3 to use the coming period to engage Tehran, seek to the greatest extent possible to provide sanctions relief or economic reprieve, get Iran to resume full compliance and, possibly, to agree to the initiation of broader negotiations. Considering how close the region came to a conflagration, Iran and its Gulf rivals – Saudi Arabia and the United Arab Emirates in particular – ought to build on initial steps in parallel and develop diplomatic engagement of their own.

Finally, Tehran should recognize that the combination of quashing dissent, avoiding major reforms and playing a perilous nuclear and regional game of chicken is unlikely to prove sustainable. Sanctions have exacerbated many of Iran’s political and economic problems, but they did not create them. Tackling the endemic ills of corruption and mismanagement, refraining from adding fuel to regional fires and avoiding brash moves that could see it increasingly isolated financially and diplomatically may be a tall order. But the alternative could be considerably worse.

ROBERT MALLEY
is president and CEO of the International Crisis Group. 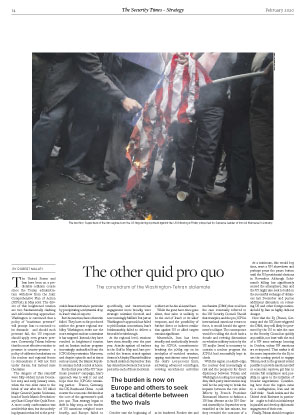