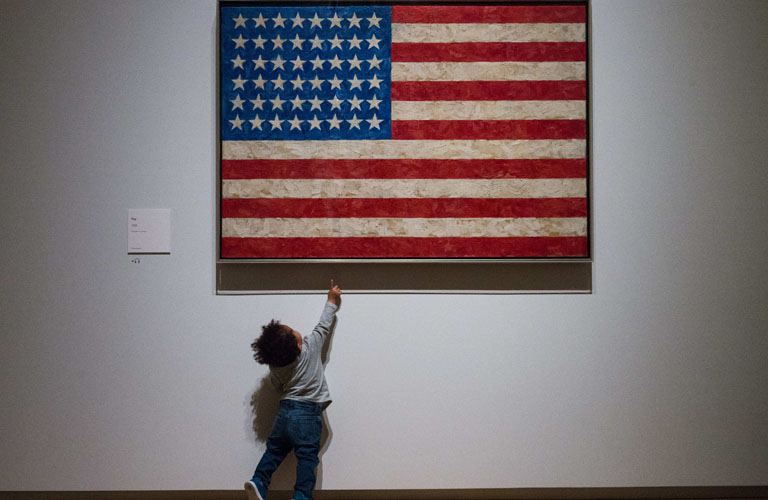 As of the beginning of February, nine Democratic candidates had announced a bid for the US presidency; The New York Times estimates that a tenth candidate is “all but certain to run” and identifies three more as “likely to run” and an additional nine who “might run.” That adds up to a potential 21 candidates on the Democratic side, plus Starbucks CEO Howard Schulz’s possible candidacy as an Independent.

Of the nine running, only Senator Elizabeth Warren has laid out her foreign policy views thus far, in an article in Foreign Affairs. But the once and future foreign policy advisors to a number of candidates are also gearing up, offering their ideas and helping to frame the key issues that Democratic contenders must be prepared to address.

Democrats should not shy away from a robust internal debate on these questions. As important as it is to have a unified party in the general election, both Democratic and Independent voters will benefit from a defined, bold and genuinely progressive foreign policy platform, rather than a set of mushy compromises.

Here is my version of the most important questions that any candidate should be prepared to answer, followed by a description of emerging debates in what are admittedly still early days, with lots of voices left to weigh in. These questions do not follow the standard foreign policy script. For instance, they are not formulated in terms of the issues that foreign policy experts think about when we look at the world. They are likely to resonate much more, however, with the way US presidential candidates formulate issues in terms of the constituencies they are trying to court.

Before diving into this question, it is worth noting, and regretting, how Donald Trump has legitimized the very idea of America First. When he first put it forward in April 2016, both Democrat and Republican foreign policy pundits assumed he was simply unaware of its 1930s isolationist and pro-Nazi roots. It turns out that he understood it all too well.

Three years later, America First has become the banner not so much of isolationism as of belligerent nationalist unilateralism, the rallying cry of opposition to the alliances and institutions of the post-World War II international order. The issue is whether and to what extent the United States should underwrite that order and its leadership role within it, or whether it should put itself – and the welfare of its citizens – first.

“That’s a false dichotomy!” would be the claim of virtually all the attendees of the Munich Security Conference (MSC). But Trump has plenty of fellow travelers on the left. Political scientist Daniel Nexon describes the Democrats as divided “between two depressingly familiar alternatives: liberal internationalists of the kind associated with the Democratic establishment, and antihegemonists, who want to see the United States drastically reduce its pretensions to global leadership.”

To move from the conceptual to the concrete, Former Deputy Secretary

of State Antony Blinken, the top foreign policy advisor to Vice President Joe Biden, co-writing with neo-conservative icon Robert Kagan, group together Trump’s America First policy and “its progressive cousin, retrenchment,” arguing that both are “broadly popular” among both Democrats and Republicans. “Retrenchment” is precisely what Trump is doing in pulling out of Afghanistan and Syria and making a periodic case

for removing troops from Europe and South Korea.

It is up to Senator Warren to set the terms of this debate on the Presidential campaign trail. And she has, by acknowledging that the story of how the US built the “liberal international order” is a “good story” and owning the importance of “preserving the United States’ global leadership role.” She mentions US global leadership only once, but on the assumption that she is the furthest left of the heavyweight candidates, she is defining the boundary of intra-Democrat foreign policy debates in a way that deems the fiercest anti-hegemonists out of bounds.

If the reigning assumption is that America should lead, and should lead very differently than Trump and his truculent trail of insults and attention-getting stunts, then the second question that all candidates must be prepared to answer, is how. The answer commands remarkable consensus across the Democratic Party: not by force, but by diplomacy, development, multilateral cooperation, law enforcement and targeted sanctions – a whole suite of civilian tools.

As Nexon sees it, this consensus includes “reining in the national security state,” and, crucially, “reducing defense budgets.” Warren certainly agrees. Perhaps more surprisingly, Hillary Clinton’s former Director of Policy Planning and Obama’s Deputy National Security Adviser Jake Sullivan also affirmed to me, in private conversation, “the need to shift money from defense to innovation, economic statecraft and diplomacy – as part of a unified national security budget.” Blinken and Kagan similarly advocate more resources for “preventive diplomacy,” but also emphasize the need for deterrence, which will require striking “the right balance of modernization, readiness, asymmetric capabilities and force structure” in our military planning.

Real differences lie beneath the surface here, although all candidates will take refuge in the demonstrable need for a radical reorientation of much US defense spending away from aircraft carriers and toward artificial intelligence.

A final area of agreement, and an important one, focuses on the criminal underbelly of many global problems. Sullivan and Warren agree, for instance, on the importance of fighting global corruption, kleptocracy and tax evasion, initiatives that are likely to catch many American as well as foreign fish in their net.

By stepping out early, Warren has framed the traditional debate between protectionists and free traders on her terms – a framing that will be hard to dislodge. She says outright that “the United States can no longer maintain the comfortable assumption that its domestic and foreign policies are separate.” On the contrary, she proposes a new guiding principle: “US foreign policy should not prioritize corporate profits over American families.”

Sullivan agrees on the need to pay more “attention to the distributional effects of international economic policy.” But Warren is flipping the Cold War script, assessing foreign policy decisions not according to a separate geopolitical or geo-economic logic, but in terms of their impact on working families across America.

What would this approach mean in practice? First, a very hard line toward China, regardless of whether the US needs China to cooperate on other global issues, or whether we risk making our other Asian allies and partners nervous. Second, the adoption of a “twenty-first century industrial policy,” one that strengthens the nation by lifting up American workers.

On the debate stage, Warren and any other Democrats who follow her lead will be vulnerable to the “statesman’s putdown”: a candidate with direct foreign policy experience will recall a crisis or a set of complex negotiations that he or she faced with an adversary or ally and point out that the world is more complicated than Senator Warren realizes. But make no mistake – the question of who wins and who loses from foreign policies, and the refusal to subject foreign policy decisions to a different set of criteria than that of domestic policy decisions, will be the crux of intra-Democratic differences.

Where do candidates fall in the endless, and endlessly frustrating, realist-liberal debate over the relative importance of standing for US values in our relations with other countries? Warren’s Foreign Affairs article is subtitled “Strengthening Democracy – At Home and Abroad,” which at first glance, at least for foreign policy mavens, seems as if it could have been written by Robert Kagan in the heyday of neo-conservatism and liberal interventionism.

But Warren has a very different twist on what promoting democracy and human rights actually means. She sees the threat to democracy, at home and abroad, as “the systematic failure to understand and invest in the social, political and economic foundations on which democracies rest.” She thus again unites foreign and domestic policy, drawing a line between leaders who advance the interests of all their people and the autocrats and corrupt capitalists that Trump favors, leaders like Putin, Erdoğan, Orbán and Bolsonaro.

No other Democratic candidate is likely to stand up for closer relations with any of these governments, so the values question may simply be laid to rest for this primary campaign.

From a personal point of view, I would like the fifth question to be “what should the 21st-century global order look like?”. But I honestly think American voters do not care. Much more pertinent is the way in which hardcore national security concerns can suddenly surge again to front-of-mind if the Islamic State, Al Qaeda or any other foreign terrorist group succeeds in pulling off a substantial attack within the United States.

As noted above, Democrats across the board are likely to argue that the US has focused too much on counter-terrorism and not nearly enough on counter-corruption and countercrime more generally, including the many other global criminal networks that facilitate moneylaundering and trafficking in arms, drugs and people. But an attack will suddenly thrust the threat of jihadist terrorism back to center stage. All candidates should be preparing their responses for that eventuality.

I have perforce left out a number of important foreign policy issues, such as immigration (which I am choosing to treat as a domestic issue), refugees, technology transfers and, indeed, most areas of the world. But to these five questions I would add a sixth bonus question, one that no one is currently asking despite how critically it will determine future US foreign policy.

To paraphrase the musical Hamilton, who will actually be in the room where it happens? Which candidate will recognize that a cadre of foreign policymakers, on the right and the left, who are still overwhelmingly male and even more overwhelmingly white simply cannot accurately reflect and promote American interests?

That’s a tough issue to raise at the MSC, as a quick look around the room will reveal. But it is a question that US candidates for president must ask, not for silly reasons of “identity politics,” but because the American people reflect and connect to the entire world. The foreign policy establishment currently reflects and connects only to Europe.

Two long years of speeches, debates, advertisements, primaries and conventions lie before us, on the Democratic side and possibly the Republican side as well. Foreign policy issues rarely swing an election. But deciding where they stand on these five broad questions will help candidates figure out how they see the world and America’s place within it.

ANNE-MARIE SLAUGHTER
is head of New America. She is a foreign policy analyst and a former dean of Princeton University’s Woodrow Wilson School of Public and International Affairs. She served as director of policy planning under Secretary of State Hillary Clinton from January 2009 to February 2011. 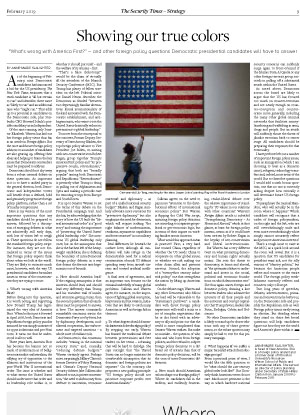