From Brussels with love. To a more assertive EU in a volatile world 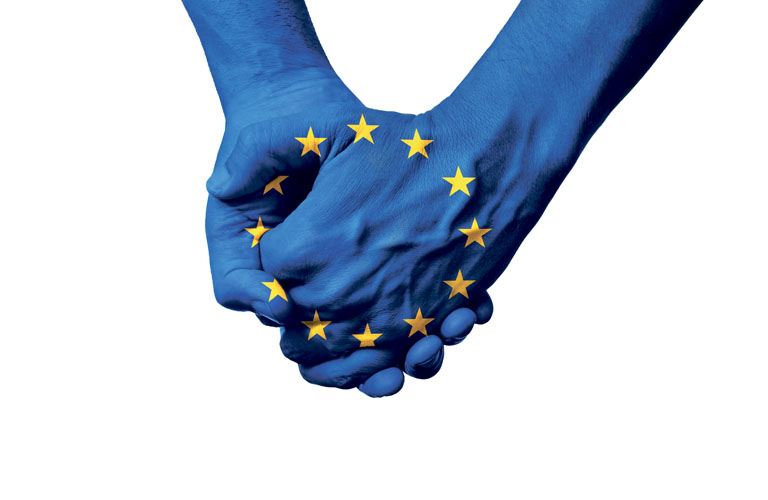 As we meet in Munich this year, the prediction made in last year’s edition of this paper with regard to the growing importance of great power rivalries still rings in our ears. Geopolitics is back and likely to stay.

What is more, our strategic environment is growing ever more unpredictable. Today, major powers openly challenge the rulesbased international order and seek to promote alternative visions of a world divided into spheres of influence. Geopolitical rivalries stoke tensions and raise the alarm bell of a new “proliferation age” that risks escalating into inadvertent military confrontation. Climate change is becoming an existential threat while cyberspace and disinformation campaigns are the new weapons of the 21st century.

For the European Union, the answer is clear; these challenges can be tackled only through a multilateral approach. If we stay united, we will have the tools and the political weight to shape the future global order. This is why instead of retreating from international cooperation and global partnerships, the EU is stepping up its commitment to address global challenges together with its partners. This is true for the Paris Agreement on climate change, the Joint Comprehensive Plan of Action (JCPOA) on Iranian nonproliferation, the 2030 Agenda for Sustainable Development, the EU’s strategy for connectivity between Asia and Europe and the reform of the WTO.

While these agreements are, in essence, hard to reach, we are convinced they are the best way to ensure a more peaceful, prosperous and secure global environment – even more so when it is clear that no single country can address these challenges alone. I am convinced this approach is the right one. The fact that demands for European action from our partners have never been so high speaks for itself.

At every given opportunity, the need to define common answers to common problems is not only highlighted, but also translated into action. The EU is therefore investing in broader international cooperation and partnerships, above all with NATO, the UN and regional organizations such as the Africa Union and ASEAN. Our trilateral EU-AU-UN cooperation on common challenges such as migration illustrates how multilateral solutions can contribute to greater safety, stability and prosperity.

For instance, as the UN IPCC Special Report on Global Warming warned us recently, there is an urgent need to act on climate change. This is the logic behind the EU’s tireless efforts to reach a successful outcome at COP 24 in Katowice. The EU will lead by example by turning its own ambitious commitments for 2030 into concrete action. This was made clear at the high-level event on climate and security hosted by the EU last June.

In the security sector, the EU continues to assert its role as a security provider. Not only is it working internally to intensify joint efforts to effectively fight terrorism, hatred and violent extremism, the EU is also engaged on the ground with 16 crisis management missions, which involves the coordination of nearly 4,000 men and women. From strengthening the capacaties of internal security forces in the Central African Republic, Mali and Niger to supporting security sector reform in Iraq, fighting piracy off the coast of Somalia and preventing a resurgence of violence in Georgia, the EU continues to bolster international security in its neighborhood and beyond. This is complemented by continued engagement in more than 40 mediation activities across the world – from Colombia to Yemen and the Philippines – and underpinned by financial assistance as the EU remains the lead donor for development and humanitarian aid.

As Europe takes more responsibility for its own security, the debate on European strategic autonomy has moved to the fore, and not without controversy. However, at its heart is some simple reasoning; when needed, Europeans must be able to protect and defend European interests and values and have the capacity to act. We want to be able to cooperate with third countries on our own terms.

In this respect, we stepped up the development of joint military capabilities through our Permanent Structured Cooperation (PESCO); we will increase joint investments through the European Defence Fund; we are streamlining military command structures (MPCC); and we agreed to a compact to strengthen our civilian crisis management. As such, these initiatives also contribute to strengthening NATO’s European pillar as well as the EU’s collective defense. Greater responsibility also includes beefing up our own resilience and capacity in energy, space, infrastructure and other critical sectors. We Europeans cannot accept interference and destabilization through hybrid and cyberattacks, hence our ongoing focus on reinforcing cybersecurity capacities, improving the protection of data and containing disinformation through the recently adopted Action Plan against Disinformation.

We also need to be extra vigilant to preserve achievements on non-proliferation, such as the INF treaty or the nuclear deal with Iran, as the stakes for our own security are simply too high. The starting point cannot be to dismantle the current architecture and start from scratch. We Europeans are working at all levels to promote the universalization and implementation of existing agreements, such as the Treaty on Non-Proliferation of Nuclear Weapons and the Hague Code of Conduct against Ballistic Missile Proliferation. We are also pushing for the Comprehensive Test Ban Treaty to enter into force, which could play an important role as we work towards a complete, verifiable and irreversible denuclearization of North Korea.

Taking greater responsibility does not stop at defense issues. Security today is also about economic security. This notion includes the strategic importance of the euro and the need to ensure that the single currency can play its full role on the international scene. Promoting the euro’s international role is part of Europe’s commitment to an open, multilateral and rules-based global economy. The extra-territorial effects of sanctions also challenge the EU’s capacity to follow through on our own political commitments. In this context, we are developing mechanisms that will assist, protect and reassure economic actors when pursuing legitimate business abroad.

As Europeans, we cannot afford to waste time or be less innovative than others. We need to modernize our approaches and engage more actively with new actors at the intersection of technology and foreign and security policy. This is why the high representative launched the Global Tech Panel – including the CEOs of major tech companies – to help ensure that international ethics and rules can keep pace with human ingenuity. To harness these opportunities, we must also take the security implications seriously, hence the recent European Commission Communication on Artificial Intelligence.

All in all, supporting a rulesbased multilateralism and greater European strategic autonomy are not contradictory objectives. If we strengthen our resilience in the face of new risks, the European Union will play its part in reinvigorating the multilateral order and become a force to be reckoned with as an assertive actor in a volatile world.

We must re-address arms control 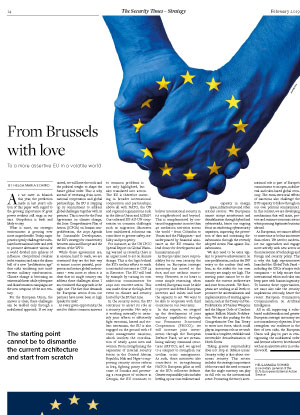