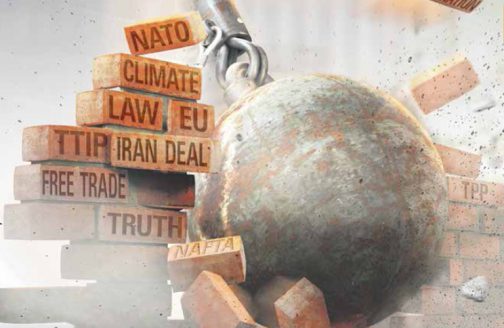 The paradigm of a world in crisis is dominating the international debate. “Post-truth?”, “Post- West?”, “Post-order?” are questions certain to be raised at the Munich Security Conference. In the echo chambers of the “every nation for itself” ideologists, it sounds as if we are already on the slippery slope towards a Hobbesian system in which the European Union, NATO, the merits of rules-based order and even long-standing friendships and partnerships seem suddenly in danger of becoming insignificant. The reality, however, is different. What is needed is a sober look at the facts while steering clear of the “post-ism” trap.

Not unlike most generations, our age faces a host of challenges. A quick glance at the Munich Security Conference agenda provides a brief summary. However, we are fortunate to be much better equipped than our predecessors to do what is necessary to preserve and stabilize the international order. Unlike previous generations, we have rules, norms and multilateral institutions to build on. Yet rules are not always and not everywhere observed. Even Europe has recently witnessed the violation of basic Helsinki principles like sovereign equality, abstention from the use of force and the integrity of borders. Nevertheless, the answer must not be to abandon the rules, but to strengthen them by underlining the long-term benefits of trust and cooperation – as Germany did throughout its OSCE chairmanship in 2016.

For Germany, the European Union has by no means lost its significance. The EU is the living, breathing reality of the “working peace system” envisaged as early as 1943 by David Mitrany, the Romanianborn political scientist. Starting with an integration process that resulted in a common market and common policies for 28 nations, the founding members achieved and preserved peace for the longest period in their history. At the same time, they created an area of prosperity, stability and civil liberties that attracted ever more countries to join the EU – until now.

The outcome of the British referendum sent a shockwave through the EU. But even on the brink of Brexit we are sending a strong message: The EU27 has not fallen into paralysis. Indeed, we have set out clear parameters and a unified position ahead of the upcoming negotiations. Moreover, when confronted with an array of challenges striking the wider continent, including the rise of populism and nationalism, European leaders have rolled up their sleeves. In Bratislava we identified key areas in which action is necessary in the short term: migration and external borders, internal and external security, as well as economic and social development, especially for young people. When European heads of state and heads of government meet in March for the 60th anniversary of the Treaties of Rome, they will set the agenda for the next decade.

We know that rallying around declarations does not guarantee cohesion among the EU27. We must enable the EU to take on the tasks we want it to fulfill, particularly in those areas where the European people have high expectations of Brussels delivering concrete results. France, Germany and other European partners agreed that the Common Security and Defense Policy (CSDP) is an important field in which the EU should advance with urgency and with substance. The EU is already active in 16 civilian and military operations on three continents, including police and judicial missions. The EU is the only international player with such a well-organized toolbox.

But we can still do better. Especially with regard to irregular migration, hybrid threats, terrorism and organized crime, our mechanisms for crisis management should work more quickly and more proactively. And whenever necessary, civilian and military crisis management must go hand in hand, coordinated, planned and executed in a comprehensive way.

Despite its ambition in the field of military crisis management, the EU is not an alliance for collective defense. But together with NATO, the EU relies on a modern and strong pool of European forces that not only underpins our capacity to act, but also provides for a fair European share of NATO’s role in transatlantic security and collective defense. Germany has already started filling gaps in European capability, together with our partners in the Framework Nations Concept. After all, spending more on defense is necessary, but not sufficient: European members of NATO and the EU must also spend their funds in a more coordinated manner.

Germany has shown leadership from Wales to Warsaw and beyond, conceptually and as the main European contributor to operations and to NATO activities to secure its eastern border. At the same time our civilian efforts are at an all-time high. In terms of the current budget of the Federal Foreign Office, we will invest more than ever before in international peace and security, including humanitarian assistance, conflict prevention and arms control, as well as stabilization. Supporting the United Nations in its many roles remains the center of our activities, not least in Mali and other parts of the African continent.

Alongside these efforts, we must not neglect the world around us. As Europeans and Americans were major drivers in shaping the current global order, we both share responsibility for and well-defined interests in the effects of globalization. We must shape it in a way that serves the security and prosperity of all parts of the world and all social classes. It would therefore be utterly wrong to fall back into a world of isolationism and trade wars. We instead need a global market that is regulated by fair rules, norms and agreements, and where economic freedom and social responsibility are in balance.

The EU has demonstrated that such a social market system does indeed work and provides wealth gains for all those who take part in it. The CETA trade agreement between the EU and Canada proves that free trade does not contradict social standards and consumer interests. This is a path we should follow.

Globalization has taught our societies that we are all connected, no matter where in the world we live or what we believe in. This certainty will not disappear by denial, by building walls or by closing off exchange, dialogue and markets. This is another fact on which we can rely.

A version of this article appeared in print in February, 2017, with the headline “Certainties in an uncertain world”.

Sigmar Gabriel was minister of economic affairs from 2013 to 2017. In February he became the successor to Frank-Walter Steinmeier as foreign minister.