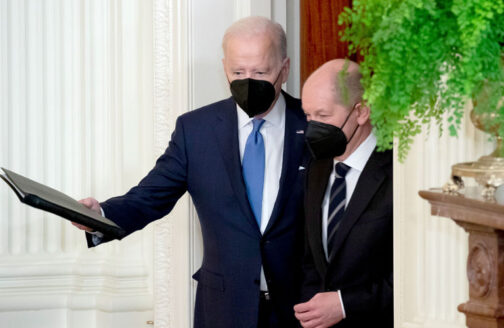 Behind Moscow’s roar lies the realization that its international influence is on the wane.

“German weapons for Ukraine?” “Will Nord Stream 2 sink to the bottom of the Baltic if Russia attacks?” If German and international policymakers continue to focus on naval-gazing issues like these, they face the grave danger of losing sight of the real challenge we’re facing in the debate over Russia: The leadership in Moscow aims to make unilateral and long-term changes to the European peace order – to our detriment.

The massive military threat against Ukraine is more or less the vehicle Russia has chosen to force the West to accept its demands. After all, it’s not just a matter of preventing Ukraine from making decisions regarding its own security; Russia has murmured similar threats to both Finland and Sweden. The Federation’s goal is to strip our East-Central European partners of military might, disallowing NATO troops or facilities on their territory. As few as 6,500 Estonian soldiers would then be facing one million Russian soldiers. Moreover, Russia wants the US to withdraw its nuclear umbrella from Europe – the very foundation of our security.

Moscow knows that it once negotiated and agreed upon the very same rules and principles it has now grown tired of. But that is of no interest to the Russian leadership. It seems that Moscow might have once again miscalculated just how united the West is and its readiness to take consequential action, if necessary. After all, we simply cannot revert back to the 19th century, when great powers decided among themselves how smaller countries should position themselves, with the help of buffer zones and spheres of influence. It was an approach that failed horribly and led to two world wars. Even Viktor Orbán, always eager to cozy up to Moscow, must see his country’s security in jeopardy in the face of Russian demands. His friend Recep Tayyip Erdoğan is even supplying Ukraine with high-performance drones and consistently refuses to recognize the annexation of Crimea.

So how do we explain Moscow’s behavior? What on earth is it up to? Paradoxical as it may sound, Moscow’s belligerent posture exposes the fact that Russia’s international influence is destined to continue its decline if it fails to act. The country’s wealth is almost entirely based on the export of raw materials, oil and gas, the very fossil fuels we’ll buy less and less of in the foreseeable future. In spite of some progress – robust military equipment is now Russia’s second largest export – the autocratic leadership in Moscow is making no headway in eliminating the structural deficiencies of its finite economic model, which include excessive bureaucracy, impediments to private enterprise, discouraging conditions for foreign investors, corruption and kleptocracy. All these shortcomings may be well-known and addressed in public debates, but they remain unremedied. If Russia were as economically successful as China, it would not have to make use of alarming threats to wield its influence on the international stage. Such a development would present us with a completely different set of challenges.

The fact that Russia, too, sees its security threatened may also strike us as paradoxical. Nothing has changed with regard to the poor prospects of Ukraine and Georgia becoming NATO members since the 2008 summit in Bucharest, when this state of affairs was established. Indeed, NATO was not the first military alliance to expand after the end of the Cold War; instead, it was the Russian-dominated Collective Security Treaty Organization that expanded with the accession of Belarus in 1992. And where would the trans-Atlantic alliance get the suicidal idea of attacking a nuclear power like Russia anyway?

Some of these security anxieties are built to be instrumentalized, while others undoubtedly have deep roots in a form of intelligence-driven thinking that sees Russia as being surrounded by conspiracies and attempts by the West to instigate a “color revolution” there as well. But perception is reality, of course, which is why it’s essential that we talk about it, that we try to understand the other’s point of view, to separate chimeras from realities and come to agreements – over transparency, confidence-building measures and arms control – without surrendering the principles that have successfully guaranteed peace in Europe. We should take it as a marker of success that Western policy has succeeded in opening numerous channels of dialogue in the face of ultimatums and demands backed by threats of violence. If, conversely, Russian leadership considers it a success that it is now again talking “eye to eye” to the US, then that’s something we would all be happy to concede. After all, it’s also a question of how the Kremlin will find a way out of the dilemma it has created for itself. In a heated atmosphere dominated by enormous amounts of propaganda, all parties must also be able to declare victory at home.

But diplomacy has its limits – after all, it takes two to tango, and the Kremlin more or less refuses to engage. So, unfortunately, it remains unclear whether Russia will refrain from taking military action against Ukraine. Even a naval blockade of the Ukrainian coast between Crimea and the Romanian border would pose an enormous challenge to Kyiv, but also to the international community. One of the most important elements of Western policy should be to clearly identify in advance such scenarios and objectives.

For Russia, the consequences of such an approach would be dramatic in several regards. Western sanctions would be massive and drastic – and they would target the Achilles heel of the Russian leadership. No matter the size of its current financial cushion, Moscow is dependent on its enormous revenues from oil and gas exports, on international banking connections and on high-tech imports from the West. Western sanctions would likely jeopardize the leadership’s power base – and this is something it truly fears.

Russia would also be tasked with weathering the burdens of a major war at home. They’ve already attempted – sometimes using brutal methods – to conceal the fact that Russian soldiers were killed in the Donbass conflict. And beyond that, an attack on Ukraine would render it impossible to achieve other goals the Russian leadership has set for itself. Moreover, it is likely that the hitherto restrained debate regarding NATO membership for Sweden and Finland would kick into high gear, and that NATO – which has done everything in its power to honor its commitments under the Founding Act agreed to with Russia – would take a completely different tack in East-Central Europe. A further probable outcome is that critics of a German nuclear arsenal would begin to rethink their position.

And what about Germany? To paraphrase Mark Twain’s appraisal of Wagner, the German government’s policy is actually far better than it sounded at first. By now, the line taken by Chancellor Olaf Scholz (SPD) and Foreign Minister Annalena Baerbock (Green Party) is clear. Scholz has succeeded in committing his party to pursuing a unified course; he’s not talking about putting an end to Nord Stream 2, yet he isn’t ruling it out, with some in the SPD hoping it won’t come to that. Scholz will be less ambiguous in talks with both the US and Russian presidents than he lets on in subsequent press conferences. The irritation with Germany’s position expressed by participants in the international debate was caused to a great extent by the cacophony of distractions from the sidelines. Germany has much to contribute and is actively doing so. The revitalized Normandy Format is the only forum in which Ukraine and Russia speak directly to one another.

Incidentally, China, too, has yet to recognize the annexation of Crimea. As important and weighty as the demonstrative closing of ranks between Xi and Putin at the Olympic Games in Beijing may have been, its long-term significance should not be overestimated. Russia is already the junior partner in this relationship and the discrepancy will only grow as China pulls further ahead. China ships 16.9 percent of its exports to the US and only 1.9 percent to Russia, of which 90 percent are processed goods. In contrast, 90 percent of Russia’s exports to China are raw materials. If there’s one thing Russian leaders fear, it’s being embraced amicably such that it leaves them out of breath.

But Russia has an alternative – Western Europe. We don’t have to become best friends to create a mutually beneficial relationship. We should stick to the proper approach of responding robustly to peace violations and while using dialogue to highlight prospects that might be attractive to Russia. These could range from ensuring security in Europe to devising joint solutions for other major issues, such as terrorism, migration, pandemics and climate change. In doing so, we should always be clear that we’re the more attractive alternative to China, a nation that poses an equal short-term challenge to us all – but a greater one to Russia in the longer term. We’re an alternative that seeks to ensure an adequate and peaceful coexistence on the Eurasian landmass. But this doesn’t mean the Europeans don’t still have a lot of homework to do – not least because no one can predict who’ll be sitting in the White House after 2024. And the Russian leadership must be willing to engage in a conversation that actually has the interests of both sides in mind.

Rüdiger von Fritsch was German Ambassador to Russia from 2014 to 2019. 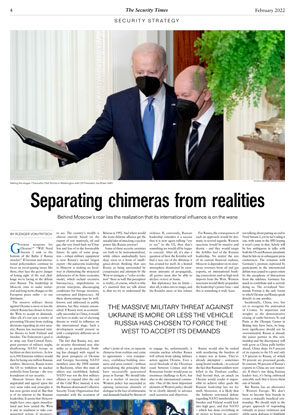