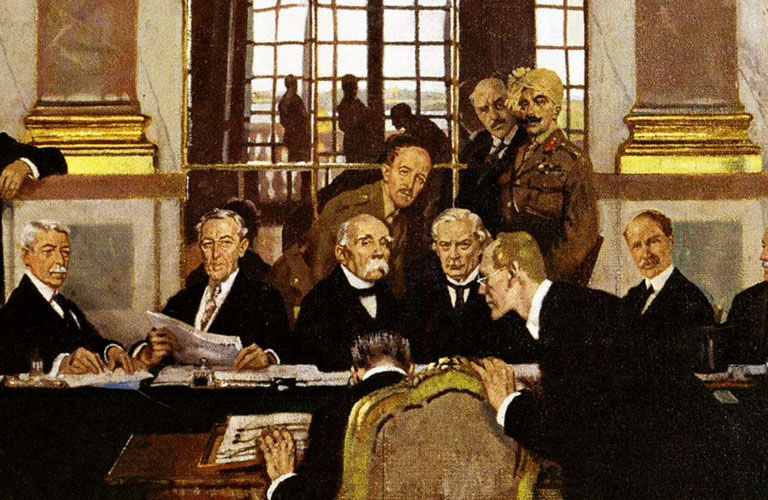 In the grand scheme of European history, the 19th century stands out as an era of peace. However, this characterization of the epoch – defined by historians as spanning the Congress of Vienna and the start of World War I – rings only partly true. A whole series of wars dotted Europe at the time, like the Crimean War and the Italian and German wars of unification, just to name a few of the most significant conflicts. But these were limited both in space and time, and usually ended with one decisive battle after which peace was declared. The wars almost always lasted just a few months while never posing a significant threat to the social order or having greater consequences than the shifting of political frontiers. Spatially and temporally constrained and legally regulated wars seem to correlate with overall periods of prolonged peace.

However, it’s an altogether different picture when conflicts drag on, cannot be localized and become dictated not by the pursuit of decisive victory but rather by survival in a war of attrition. Such was the case with the Thirty Years’ War (1618–1648) and then again in the two World Wars of the 20th century, after which thinkers and laypeople alike came to the conclusion that war ought to be forever removed from the tool chest of politics.

In 1648 and in 1815 – at the Peace of Westphalia and at the Congress of Vienna respectively – observers still had confidence in the idea that war could be regulated solely by limiting its scope. The means to this effect was the state monopoly on the right to wage war. The people left the issue of war to the prudence of their rulers, trusting that they would approach it with restraint and in accordance with sound cost-benefit analysis.
This trust had become a thing of the past in 1918 and 1945. At issue now was nothing less than the elimination of war. This would require an authority to ensure that any state or entity acting in violation of this ban on war would not benefit from doing so. Yet neither the League of Nations nor the United Nations developed into such an authority; the great powers only took action against breakers of the peace if it served their immediate interest to do so. Likewise, the 2005 global commitment to embrace the “responsibility to protect” has had no discernible effect. This is the first answer to the question of why today’s wars never end: as a general rule, no state is prepared or in a position to enforce the termination of a war. Those concerned must content themselves with requests to warring parties – requests that either fall on deaf ears or achieve zero effect.

So, why does that rational calculus not apply today, the thinking in most cases ensured that wars were ended when the prospective harm exceeded the verifiable benefits? After all, in several regions of the world we are facing wars in which the harm far outweighs the benefits, for instance in the now four-decade long war in the Horn of Africa, or the wars that for 30 years have continually reignited around the African Great Lakes, or finally in the wars in and around Afghanistan and those that developed in the wake of the Arab Spring.

These conflicts are all marked by the fact that they only marginally pit one state against another; they are essentially civil wars, to which a different rationality applies than does to wars between states. If the latter follow instrumental guidelines, the first have an existential dimension that renders any compromise impossible. Yet peace treaties have always relied on compromise, even if there are clear winners and losers. Where this is not the case, a peace treaty proves to be little more than a ceasefire, and after a period of time the war begins anew.

That is the second answer to the question of why today’s wars no longer end: the dichotomy that developed under the Westphalian sovereignty established in 1648 – wherein a sharp distinction was drawn between interstate war and civil war, which third parties are forbidden to join – no longer applies; indeed, with increasing speed the two types of war are coalescing into one.

Wars may begin as civil wars, but soon adjacent or nearby states play an important role, thus fomenting transnational wars in which internal intrastate and interstate conflicts blur into one. These can be so complex that they may no longer be resolved through straightforward peace treaties; what is required are protracted peace processes.

Since the end of a clear distinction between interstate war and civil war, closed war economies have been supplanted by open ones. In a closed war economy, the warring parties only have access to resources within the territories they control – when these resources expire, so does the war. Carl von Clausewitz likened this process to a volcano becoming extinct. Open war economies possess an altogether different dynamic, one characterized by the permanent influx of money, weapons, relief supplies and combatants from outside the war zone. Although the world community may establish arms embargoes and monitor money flow in attempts to close an open war economy, our age of back-channel commerce allows these efforts only a meager chance at success.

This was already the case with the proxy wars of the East-West conflict, but since the end of the Cold War, this phenomenon has taken on even greater dimensions. The external backers have now diversified; and, accordingly, more actors now pose as external supporting powers while the number of parties to the civil war has multiplied. This is the third reason.

Presumably, the most significant reason for the extended duration of new wars is the fact that there exist numerous actors whose lifeblood is the wars themselves; they have transformed violence from a political instrument into an economic resource. Thus they have no interest in ending the war – not the warlords, for they would lose the opportunity to amass great wealth through the conflict, and not their followers, who would then recede into social marginality. Herein lies the rub: the longer the war wages on, returning to a peaceful life becomes all the more difficult. When entire generations have grown up knowing nothing but smoldering war and having learned little more than how to use violence to survive this war, it becomes close to impossible to end an armed conflict via peace treaty. This is the fourth reason.

Not all the factors identified here are always visible in the war zones themselves. Often, one factor plays only a minor role while another bears outsized influence. Moreover, the constellation of factors is subject to constant change. If classical warfare was marked by the fact that certain notions of order became elements in the regulatory framework for conducting wars (even if the warring parties did not always defer to this system of order), then our new wars are marked by the sheer lack of such regulation, which brings with it a higher level of cruelty and a greater number of atrocities. Breeding revenge and counter revenge, this cannot be dispelled through legal intervention by a neutral third party, for there are no neutral third parties in civil war. Violence must be returned and humiliation must first be avenged before any peace negotiations can begin.

There is always one party with a score to settle, which will then lead to new scores and new determination to settle them. This is the fifth reason why today’s wars do not end on their own – and indeed have little chance of ending at all.

HERFRIED MÜNKLER
is a political science professor at Berlin’s Humboldt University. His history of World War I has become a standard work. In 2017 he published a study of the Thirty Year’s War. 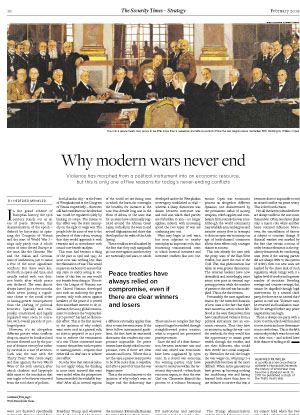