The security crisis unleashed by Putin in Europe has the SPD rethinking its Russian policy.

In politics, timing is often everything. And, sometimes, when a particular series of developments appears simultaneously, it can lead to moments of clarity and truth. This is precisely what has happened to Germany’s governing SPD with regard to how they intend to face the challenge posed by Russia and President Vladimir Putin – an issue that is essential to the future of German foreign policy.

For weeks, the SPD presented Germany’s allies with a confusing picture of its position, which is, at its very core, strongly linked to the future of the Nord Stream 2 gas pipeline. In doing so, the party ended up inspiring the exact opposite of trust abroad. Chancellor Olaf Scholz needed some time to convey a clear line in response to Putin’s massive threats of war against Ukraine. A renewed Russian violation of Ukraine’s borders and sovereignty, Scholz argued, would have serious consequences, and when it came to sanctions, “all options” were on the table, including Nord Stream 2.

At that point, former German Chancellor and SPD leader Gerhard Schröder entered the scene, completely disrupting things – as he’s been known to do in the past. He accused Ukraine of “saber rattling” yet refrained entirely from attacking Putin’s Russia, which by that time had already stationed an invasion force of well over 100,000 men at the Ukrainian border and militarily involved Belarus as well, just for good measure. Soon after Schröder’s statement, it was reported that he’d been appointed to yet another executive position relating to Russia’s strategic oil and gas companies. After holding posts on the supervisory boards of Nord Stream, Nord Stream 2 and Rosneft, Schröder will now also sit on the supervisory board of Gazprom. He will replace Timur Kulibayev, son-in-law of Kazakh ex-president Nursultan Nazarbayev, whose family lost influence as a result of the recent unrest in that country. In other words, for all intents and purposes a former German chancellor will be in league with post-Soviet kleptocrats.

Schröder has thus arrived at an end-point toward which a particular faction of the SPD had been heading for some time with regard to Russia. This point, as Gerd Koenen put it recently, was derived from “a policy of latent equidistance between Washington and Moscow” that emerged after the Iraq war of 2003, which Germany had rightly not supported. While Schröder’s distance to Russia would eventually be reduced to zero, the SPD’s feel-good term Ostpolitik would also degenerate into a cipher for “good relations with Moscow” at virtually any price.

Simultaneous to the announcement of Schröder’s latest coup, the new SPD leader Lars Klingbeil heralded a tangible turnaround: “A positive agenda with Russia is unfortunately a long way off at the moment,” he told the Reuters news agency on Feb. 3. It’s now in Putin’s hands, Klingbeil argued, whether there’ll be a return to closer cooperation. “If he de-escalates, the prospects of that kind of cooperation will increase again.” But Klingbeil also noted the need for some “fundamental” self-reflection, asking: “Are our old convictions about foreign policy still valid?”

In fact, there is more at stake in this issue than merely a departure from a long-held SPD policy. After all, this policy has always failed to recognize the true character of the “Putin system,” which owes its power “to a coalition of intelligence services, organized crime and the sale of fossil energy,” and which, journalist and SPD expert Nils Minkmar wrote in the Süddeutsche Zeitung, “a Germany governed by Social Democrats cannot consider a partner.”

Evidence of a shift in the SPD’s approach to Russia thus far can also be found in the fact that two of its top men – foreign policy spokesman Nils Schmid and chairman of the Foreign Affairs Committee in the German Bundestag Michael Roth – are by no means Schröder fans. Still, a complete reorientation will not happen overnight. For Germany’s oldest political party, which, like Putin’s Soviet Union, sprang from the international workers’ movement, the task will also involve removing some of the emotion associated with the topic of Russia, as well as burying a number of myths.

One of those myths is Willy Brandt’s supposedly “peaceful” policy of détente in the early 1970s. It would be wise to remember that Brandt, Germany’s first SPD postwar chancellor, had approached Moscow, Warsaw and East Berlin from a position of military strength. Under his chancellorship, defense spending rose sharply and was well above 3 percent of GDP. These days, however, the SPD chooses instead to remember Helmut Schmidt’s wrangling with his own party over the NATO Double-Track Decision.

If the SPD is serious about European sovereignty, there is no avoiding a similar step. This case would involve making significant investment in European defense capabilities. Even if Europe’s protection from Putin’s nuclear, hypersonic, space and “doomsday” weapons can only be guaranteed with the help of the US for the foreseeable future, Europe must finally begin the process of military catch-up it’s been delaying for decades.

This kind of security would also make it easier to achieve what the SPD parliamentary group set out to do in 2018 and what Heiko Maas already attempted to implement in some measure during his tenure as foreign minister: a European policy toward the East that entails a reorientation of Germany’s strategy toward Russia and places much more emphasis on Germany’s “real” neighbors in Central and Eastern Europe, who are often overlooked in the pursuit of special relations between one “agenda-setting power” and another. In this context, the narrative of historical guilt, which has been fixated on Russia to date, could also be brought to a level that truly corresponds to the realities of the Holocaust and the war of extermination in the East.

Roth, the former deputy foreign minister in charge of European policy under Heiko Maas, noted recently that this would involve a “European policy toward the East that does not envisage any national unilateral action, but primarily takes into account the historical experiences and concrete fears felt by large sections of society in Central and Eastern Europe.” Such a policy does not see the Russian president as a “flawless democrat,” as Schröder once did.

It’s becoming clear that Scholz and the majority of the SPD are ready for a new “European Ostpolitik” along these lines, one that includes a “realistic” approach to Putin that reduces German and European dependency – especially on Russian gas – and sees its true Russian partners in that county’s repressed pro-democracy and civil-society movements rather than in its president-for-life. This alignment would be a better fit for German social democracy.

In any case, it would be advisable for the SPD to broaden the scope of its gaze. And if the “traffic light” coalition succeeds in achieving its intended CO2-neutral restructuring of the economy within a good two decades, the issue of the so cheap, but geopolitically so expensive Russian gas will become irrelevant. At that point, the question will focus more on whether Germany and Europe wish to build up a hydrogen relationship with Russia, or whether they’ll prefer to look for other partners. When that time comes, what will remain of the empire Putin is so eager to expand, even at the risk of war? 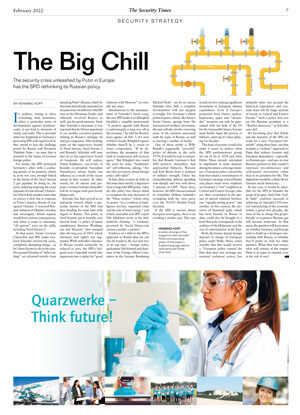