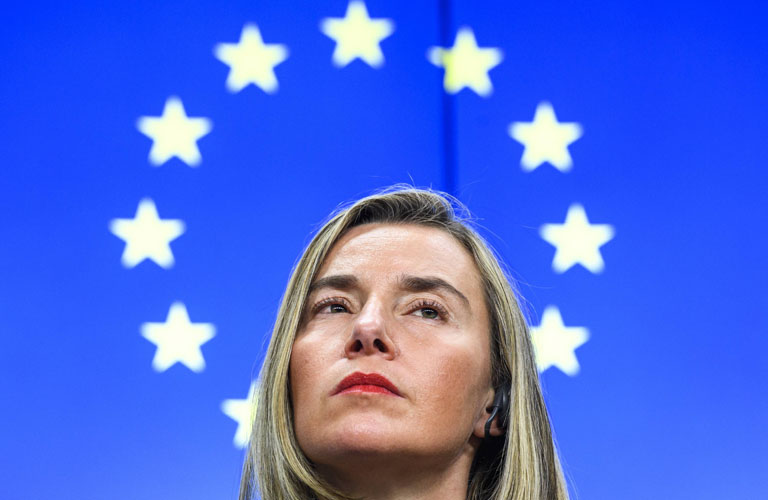 When Federica Mogherini was named the European Union’s new foreign policy chief, one particular photo made the rounds in Brussels. It shows the Italian politician at the Kremlin, shaking the hand of Vladimir Putin. Their grasp is firm, their eyes locked. The photo was taken during her first trip to Moscow, in July 2014, when Mogherini was still foreign minister of Italy.

Whoever greets Putin so affably cannot possibly speak for all 28 countries of the EU, said her critics in Brussels. The Eastern Europeans in particular accused Mogherini of being too close to Moscow. Nevertheless, the Italian social democrat got the job. But the photo with Putin has haunted her to this day. It has become a symbol of the dramatic transformation in EU-Russian relations.

It would be unthinkable today that Mogherini would strike a friendly pose for a photo with Putin. Today, she must never let down her guard. Every statement on Russia by the High Representative of the European Union for Foreign Affairs and Security Policy – Mogherini’s official title – is a diplomatic balancing act. The “strategic partner” of four years ago has become an adversary, for many, even an enemy.

The annexation of Crimea, the poison gas attack on the former Russian agent Sergei Skripal and the naval incident in the Kerch Strait have strained relations with Russia to the breaking point. The EU has become so mistrustful that it is even accusing Moscow of using a disinformation campaign to affect the European election – and is preparing to combat it.

And in Syria, Russia is seen as capable of almost anything. That Russia’s intervention in Syria has contributed to driving back the Islamic State and ending the waves of immigration to Europe has hardly been recognized in Brussels. Nor has Putin received any gratitude for his commitment to the Iran nuclear deal. The EU will gladly accept the support but it almost falls on fallow land – the mistrust is simply too great to overcome.

This is a significant disappointment for Mogherini. She had set out with the goal of building new trust. Now she must content herself if Europe does not descend into a second cold war. Brussels lays the blame squarely on President Putin, whose policies are increasingly felt to be aggressive. The trans-Atlantic relationship crisis since Donald Trump took office is only exacerbating the problem.

The Trump administration is trying to torpedo Russia’s plans for the new gas pipeline, Nord Stream 2. Germany and other participating EU countries and companies are under threat of sanctions. Trump is even trying to redefine Europe’s energy security. Yet his maneuvering is directed not only at Russia, but at Germany as well – and at the EU foreign policy that is working towards a common stance.

The cancellation of the INF Treaty by the United States presents huge problems for the EU. While most EU countries share the conclusion that Russia is harming the nuclear disarmament treaty, they fear unilateral action by the US that could have profound disadvantages for Europe. As Mogherini made clear: “The INF contributed to the end of the Cold War – and no one in Europe wants to go back to those dark days.”

But so far it does not look as if the EU is in a position to prevent a return to times that the continent had long believed it had overcome. What’s more, in recent years, the Europeans have striven to become more independent in terms of security policy and to emerge from the shadow of the old great powers.

The aim of the new security and defense union – PESCO, concluded in December 2017 – is to enable the EU to act with solidarity and autonomy, if necessary even by military means. Recently, there has been talk of establishing a European army; however, these plans remain vague and a point of contention between Berlin and Paris.

Of particular interest is the dynamic this proposal is fomenting. Is it primarily meant to refute Russia, as those in Poland and the Baltics are claiming? Or is it really about Europe taking a step away from the US, as Chancellor Angela Merkel has indicated? Should the EU even strive for “strategic autonomy,” as France has requested?

No clear strategy has thus far come to light. Even Russia has difficulty assessing these new EU initiatives. President Putin offered that he has no problem with a European army. The idea borne in Paris is “a generally positive process in terms of strengthening the multi-polarity of the world. In this sense, our positions overlap with France.”

While Germany may be in a position to be the decisive factor, its stance has become precarious, even ambivalent. On the one hand, the German government is committed to its close cooperation with France, even in terms of Europe’s relations with Russia.

On the other hand, Berlin is under massive pressure from Washington to engage more strongly militarily and to position itself more squarely against Russia. And this drama is unfolding as Germany assumes NATO’s military spearhead, the Very High Readiness Joint Task Force (VJTF): at the beginning of 2019, Germany takes over a leadership role in the Alliance.

All the while, the EU is increasingly shifting its policies in opposition to Moscow. Although Mogherini may still see Russia as a “natural partner and strategic player,” in terms of the European defense union, she is pushing for an expansion of tank routes within the EU to enable more rapid military mobilization in the east.

According to Brussels, the plans do not exclusively target Russia. Even the campaign against disinformation is said to focus on more than just Moscow. However, who else they are referring to remains an open question. It’s hard to identify a strategy there, but at best it amounts to strategic ambivalence. The EU is keeping all of its options on the table. At the moment, only one seems unthinkable: a hearty handshake with Putin.

ERIC BONSE
is a political scientist and journalist. He works as an EU correspondent in Brussels.

Who will run the world: A new global order is in the offing 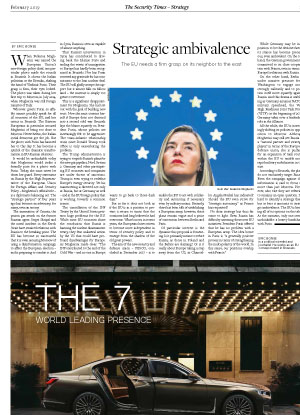