We must re-address arms control

When the history of these times is written, it may well be that the headlines of the day – Iraq and the controversies it has aroused – will pale in comparison to other international upheavals of our period. The center of gravity of world affairs is moving to the Pacific, and almost all major actors on the international stage are defining new roles for themselves.”

You may not believe it. This is not a current assessment, but a quote from a Washington Post article Henry Kissinger wrote back in 2004. If you add Iran to Iraq, it could have been written yesterday. Kissinger mentioned all the problems that bedevil us nowadays: the structural estrangement of America from Europe; European doubts about the reliability of the United States as a strategic partner; Russia’s post-imperial trauma; China’s emergence as a great power; and the break-up of the international system. The title of Kissinger’s op-ed piece was “A World in Flux,” and its central argument: “The global scene is more fluid than it has been for centuries.”

In fact, we are witnessing the third dramatic geopolitical, geostrategic and geo-economic upheaval in the past five hundred years. The first was the rise of Europe around the year 1500; the second, beginning around 1900, turned the United States into the global superpower of the 20th century; the third is the shift of power and wealth to Asia, with China pushing assertively, even aggressively forward and striving to put its stamp on a world undergoing profound change.

The relentless ascent of China has grave political, economic and military ramifications. Equally disquieting, however, is the ideological aspect. Beijing offers all authoritarians in the world an alternative model to the democratic capitalism of the West – autocratic capitalism. The American-led multilateral system that stabilized global relations since 1945 is gradually being replaced by “one world, two systems” – one set of rules and norms for the liberal West, another for authoritarian China and its global devotees.

It is a sad story that US President Donald Trump has been actively undercutting the “liberal international order” the US called into being after the end of World War II. He is a sharp-elbowed nationalist and an unabashed protectionist. His foreign policy – anti-EU, skeptical of collective defense and centered not on the pursuit of broader interests but rather on “America First” – is erratic, to say the least. Trade deficits and a narrow focus on freeriding are his benchmarks, not considerations of balance-of-power, fostering alliances and creating networks. America’s segue from over-reach to retrenchment, from perennial interventions to retreat began before Trump, but his unilateralist braggadocio has turned an overdue adaptation into an instrument of disruption.

At the end of a bruising decade, the rest of the West must contend not only with a fickle US president but also with a rising China, a resurgent Russia, ongoing cross-border terrorism, instability and chaos in the Middle East. Despite Trump’s skepticism, the unwavering support of America’s military establishment has empowered NATO to continue functioning smoothly, yet without a political strategy, let alone vision. French President Emmanuel Macron’s shocking statement that the Alliance was suffering “brain-death” has caused NATO Secretary-General Jens Stoltenberg to begin a thorough review process. It is supposed to devise an up-to-date grand strategy for NATO to confront the new realities of the 21st century.

One central question is whether the danger of armed conflict is again on the rise. The realist’s answer is: It will remain a threat, but an unlikely one. All powers will wish to avoid all-out war. They don’t want to fight. Instead they will pursue disruptive strategies: hacking, meddling in each other’s internal affairs and orchestrating disinformation campaigns. The danger, though, is that miscalculation and the logic of escalation will turn minor clashes into regional conflagrations. And transnational issues, especially climate change, mass migration and nuclear proliferation, may create quite novel security problems.

Looking at the international landscape, one cannot fail to notice a number of conundrums.

Conundrum number one: Trump has boosted US defense expenditures to unprecedented heights – $738 billion in 2020. He increased the number of troops in Europe as well as in the Middle East. But basically he does not want to fight wars any more; he wants to bring the GIs home. His way of fighting is with economic leverage. He has weaponized the two dominant phenomena of our times – globalization and digitalization. He has exploited economic interdependence in his rivalry with China and in the confrontation with Iran, but also in his relationship with European and Asian allies. Simultaneously, he has pressed ahead with the securitization of microchips, semiconductors and software. The campaign against Huawei, also focusing on foes and friends alike, is the most egregious case in point.

Conundrum number two: Last year, Russia conducted one of the largest military exercises in the Far East. This spring, NATO is going to stage Defender 2020, the largest US military training maneuver since the 1990s. About 37,000 GIs are scheduled to take part, including an entire division of 20,000 soldiers specially deployed to Europe. For months, they will rumble through Germany to the border of Russia in Poland and the Baltic republics. The point is to prove that rapid deployment can enhance deterrence. Without a doubt, the Russians will respond with another massive Zapad exercise along their western border. Both, however, must know that tank battles are obsolete. No future war will see engagements like the Battle of Kursk, which involved 6,000 tanks, 4,000 aircraft and two million troops. Drones and cyber warfare have drastically changed the realities of war. Defender 2020 and Zapad are primarily psychological demonstrations, not simulations of warfare in times ahead.

The third conundrum relates to Europe. Many feel that it must step forward as America steps back. Trump has been making noises to this effect. German politicians vow to take on greater international responsibility. Ursula von der Leyen, the new president of the European Commission, and Josep Borrell, the EU’s High Representative for Foreign Affairs and Security Policy, argue that Europe must “learn to speak the language of power.” Several conservative pundits hint at increased military engagement of the Europeans in the Middle East, while some left-of-center gurus think the military should be employed to enforce human rights in authoritarian countries.

But let’s face the facts. Realism would strongly advise us not to militarize Europe’s foreign policy. For one thing, the EU simply does not have the military capabilities to take on huge missions in its near abroad. Moreover, the US record is rather discouraging. It teaches us that wars are costly – on Operation Iraqi Freedom alone, the US spent $730 billion between 2003 and 2010. The wars last far longer than advertised; the war in Afghanistan – the longest in American history – has dragged on for nearly twenty years. Pretty soon, the US will have been tied down in Iraq for just as long. And rarely do military interventions have the intended outcome; usually they create new unforeseen and more complex problems (see Kosovo or, more recently, Libya). It taxes conventional wisdom to assume that Europe’s much weaker forces could succeed where America’s military behemoth has failed.

It is a deep and sincere wish that the Trump administration might moderate its transactional “America First” approach and once again strengthen the traditional pillars of US policy – standing by its allies, supporting free trade and upholding rules-based global institutions. It could do worse than heed Henry Kissinger’s recent statement: “The most urgent question is whether the Atlantic nations will operate with some sense of common purpose, and hence strategy, on the larger issue of world order. Or whether, in the course of adjusting to changing circumstances and redefining roles, they pursue above all their national or regional interests.”

Sixteen years ago, in his 2004 Washington Post op-ed, the grandmaster of realpolitik formulated a truism that is a valid and relevant today as it was then: “American power is a fact of life, but the art of diplomacy is to translate power into consensus.” US Secretary of State Mike Pompeo should have this adage printed, framed and placed on his desk.

THEO SOMMER
is executive editor of The Security Times 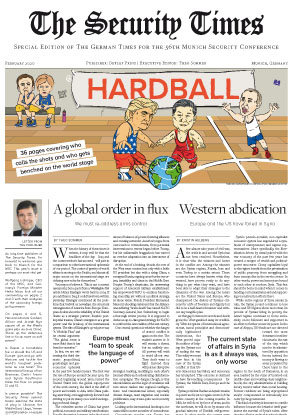