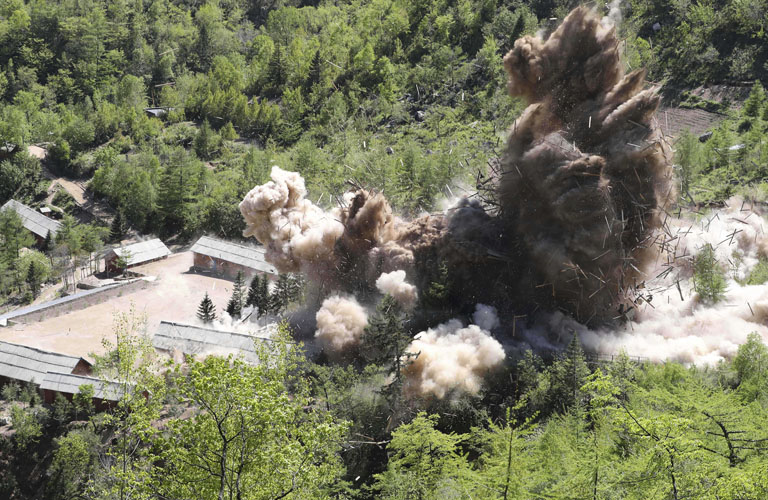 The White House has announced that US President Donald Trump and North Korea’s Supreme Leader Kim Jong-un will hold their second summit meeting at the end of February. Optimists expect that Kim Jong-un will follow through with his stated willingness to denuclearize and commit to a verifiable, irreversible nuclear dismantling. Pessimists are afraid that we will see just another summit full of rhetoric and void of substance. As of today, we do not know what the summit meeting might hold, but we should be clear about where we stand.

Let us remember Summit I, when the two leaders convened in Singapore on June 6, 2018, for their first and unprecedented meeting. On his way home, President Trump spoke of a breakthrough and tweeted that North Korea no longer presented a nuclear threat.

Noted experts and observers disagreed. They deplored the summit’s sparse final declaration, which lacked substance and perspective. They missed meaningful concessions in return for the tremendous political validation North Korea had received from meeting the president of the United States. Indeed, no definite steps on nuclear disarmament were announced.

These legitimate objections notwithstanding, the Singapore summit as such was significant and productive. Last year’s summit tackled the root cause of the diplomatic failures of the past – the mutual distrust between the US and North Korea – instead of narrowly focusing on diplomatic and military issues and technicalities. Once the leaders have agreed on a common objective, it was said, negotiations will proceed in a good spirit and tensions can be reduced. Regrettably, this political approach has worked only to some extent. To begin with, the most positive outcome so far is that the imminent risk of war has been repressed and diplomacy reigns again. Whereas in November 2017, some US military experts put the risk of war as high as 50 percent, in 2018, North Korea halted all missile and nuclear tests, thereby de-escalating military tensions.

The UN Security Council’s sanctions regime against North Korea remains intact, notwithstanding the various sanctions violations, loopholes and the repeated calls for “adjustment” by China and Russia. Thus, the international community has sustained the pressure on North Korea to give up nuclear armament definitively and earnestly.

There is no doubt that the country has undertaken some initial steps towards denuclearization, for example the high-visibility dismantling of the Punggye-ri nuclear test site. However, these actions are far from sufficient to achieve the required irreversible abolition of nuclear and missile weapons. What is more, North Korea has refused to provide an inventory of its warheads and production facilities and remains adamantly against allowing international verification. Still worse, rather than phasing out its nuclear armaments, Pyongyang appears to be continuing to invest in upgrading its ballistic missile bases and nuclear production facilities, as has been disclosed by intelligence research institutions.

Given the unresolved controversial issues, it should come as no surprise that bilateral negotiations between the US and North Korea have stalled for some time. In addition to the absence of clear North Korean obligations, matters are further complicated by the lack of clarity surrounding the term “complete denuclearization of the Korean peninsula.” It may imply the North Korean demand that US troops leave South Korea and that nuclear-armed American bombers and submarines withdraw from the region.

Despite these various problems, the negotiations have not derailed. Indeed, there is talk among the ranks that in the run-up to the summit, the climate of the talks has become very good. Preparations are taking place at different working levels and through different channels. Both South Korea and China are participating in the negotiations in an indirect way.

South Korea experienced a remarkable rapprochement with North Korea in 2018. Over the year, the top leaders of the two Korean states met three times, concluding wide-reaching agreements on common political objectives, on security issues and on bilateral cooperation. Most notably, both sides agreed on practical steps to reduce border tensions, such as removing guard posts, carrying out demining operations and establishing no-fly zones.

These new arrangements do not amount to a “de facto non-aggression agreement,” as a South Korean Blue House official has claimed, but they represent meaningful confidence-building measures and have effectively ratcheted down tensions in the DMZ. Beyond the inner-Korean rapprochement, South Korea has assumed the very delicate role of facilitation and mediation between North Korea, its former war enemy, and the US, its alliance partner.

China-North Korea relations have apparently eased; Kim Jong-un has visited the Chinese president in China four times after not meeting him in the first six years after succeeding his father. Yet normalizing the bilateral relationship does not reflect a changing strategic orientation. Rather, it follows political opportunism. China, wary not to lose influence in Pyongyang, is backing and reassuring North Korea in its negotiations with the US.

Looking ahead to the summit, no one can realistically expect that Donald Trump and Kim Jong-un will agree on a grand bargain that would end the complex and multifaceted conflict over North Korea’s nuclear program. Aside from the impossibility of dealing with these many interwoven problems all at once, there remains significant doubt surrounding the sincerity of Kim’s assertion to give up completely on the country’s nuclear program, into which North Korea has invested so much for decades that it has become a significant part of its national identity.

Against this backdrop, the upcoming summit can ideally represent the first step of a nuclear exit process. Such a process can only be imagined as a gradual, long-term procedure involving several administrations. In order even to initiate such a positive development, the forthcoming summit must finally lead to a concrete commitment to nuclear disarmament.

HANNS G. HILPERT
is head of the Asia Research Division at the German Institute for International and Security Affairs (SWP). 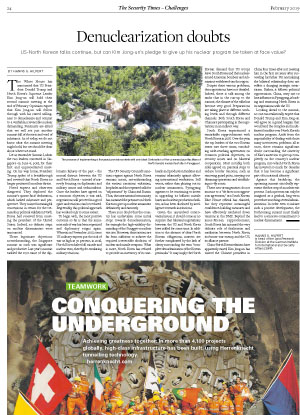