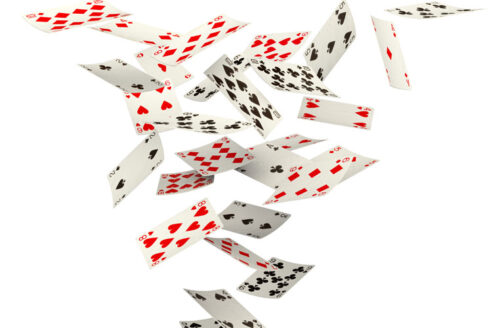 With the end of the Cold War, many believed the West had prevailed. In his 1992 book The End of History and the Last Man, Francis Fukuyama wrote that humanity had reached “the end-point of mankind’s ideological evolution and the universalization of Western liberal democracy as the final form of human government.” A few years later, Samuel Huntington issued a gloomier prognosis in The Clash of Civilizations and the Remaking of World Order that “the rise of China and the increasing assertiveness of this ‘biggest player in the history of man’ will place tremendous stress on international stability in the early 21st century.”

Western civilization did not exist in full flower until 1500, and before 1800, Asia was home to more than half the world’s population and world economy. By 1900, however, while Asia still represented more than half the world’s population it constituted only 20 percent of the world economy. The industrial revolution in Europe and North America and domination of the seas had made Europe the center of the global balance of power until it tore itself apart in World War I.

After the United States tipped the outcome of the war, it was clear that the country featured not only the world’s largest economy but was also crucial to the global balance of power. However, the US failed to act in its new role, and instead continued to behave as a free rider in the provision of global public goods, a role that Britain could no longer afford.

Lacking a global government, the world depends on the largest country to provide order and global public goods; in the nineteenth century, the Pax Britannica contributed security, economic stability and protection of global commons such as freedom of the seas. Instead, the US “returned to normalcy” and there was no liberal Western order in the 1930s. The result was a disastrous decade of global economic depression, genocide and eventually World War II.

Leaders like Franklin Roosevelt saw the mistakes of US isolationism and created the Bretton Woods institutions in 1944 and the United Nations in 1945. A turning point was Harry Truman’s postwar decisions that led to permanent alliances and a continual military presence abroad. The US invested heavily in the Marshall Plan in 1948, created NATO in 1949, led a UN coalition that fought in Korea in 1950, and in 1960, signed a new security treaty with Japan.

These actions were part of a realist strategy designed to contain Soviet power, but containment was interpreted in various ways. Americans had bitter debates over intervention in developing countries like Vietnam and, more recently, Iraq.

But while interventions were highly contentious, the liberal institutional order enjoyed broad support until the 2016 election when Donald Trump became the first candidate of a major party to attack it. His populist appeal rested on the economic dislocations of globalization that were accentuated by the Great Recession in 2008 along with cultural changes related to race, the role of women and gender identity that had polarized the American electorate.

Trump successfully linked white resentment over the increasing visibility and influence of racial and ethnic minorities to foreign policy by blaming economic problems on bad trade deals and on immigrants competing for jobs. In January 2017, Martin Wolf wrote in The Financial Times: “We are at the end of both an economic period – that of Western-led globalization – and a geopolitical one, the post-cold war ‘unipolar moment’ of a US-led global order.”

What comes next? Realists argue that world order rests on the global balance of power and that a rising China is not interested in a liberal or Western order. Some go further and predict a “Thucydides Trap” in which war between a rising power and an established power tears the world apart, much as Europe suffered in 1914.

But these gloomy projections rest on exaggerations of China’s power and Western weakness. China’s economy is about two-thirds that of the US, and an even smaller fraction if Europe, Japan, Australia and other Western allies are included.

China is a country of great strength but also important weaknesses. The US has some long-term power advantages that will persist. One is geography. The US is surrounded by oceans and neighbors that are likely to remain friendly. China has borders with 14 countries and has territorial disputes with India, Japan and Vietnam that set limits on its soft power.

Energy is another American advantage. A decade ago, the US seemed hopelessly dependent on imported energy. Now the shale revolution has transformed it from an energy importer to exporter. At the same time, China is becoming more dependent on energy imports, while much of the oil it imports is transported through the Indian Ocean and the South China Sea, where the US and its allies maintain a significant naval presence.

The US also has demographic strengths. Seven of the world’s 15 largest economies will face a shrinking workforce over the next decade and a half, but the US workforce is likely to increase by 5 percent while China’s will decline by 9 percent. China will soon lose its superlative population rank to India, while its working-age population already peaked in 2015. Many Chinese say they worry about “growing old before growing rich.”

The US has been at the forefront in the development of key technologies (bio, nano, information) that are central to this century’s economic growth, and Western research universities dominate higher education. In a 2017 ranking by Shanghai Jiao Tong University, none of the top 20 global universities were Chinese.

China is investing heavily in research and development. The country also now competes well in some fields – including artificial intelligence – and its technological progress is no longer based solely on imitation. However, a successful Western response will depend upon steps taken at home.

In short, the US and the West hold high cards in this poker game, but we must resist hysteria if we are to play our hand skillfully. Discarding our high cards of alliances and international institutions would be a serious mistake. If the US maintains its alliance with Japan, China cannot push the US beyond the first island chain, because Japan is a major part of that chain.

Another possible mistake would be to try to cut off all immigration. When asked why he did not think China would pass the US in total power any time soon, former Prime Minister of Singapore Lee Kuan Yew cited the US ability to draw diverse and creative talents from around the world and recombine them in a way that was not possible for China’s ethnic Han nationalism. If Trump’s populism leads the US to discard its high cards of external alliances and domestic openness, Lee could be proved wrong.

As China’s power grows, some worry we are destined for war, but few consider an altogether different kind of disruption. Rather than acting like a revolutionary power in the international order, China may decide to be a free rider like the US in the 1930s. China may act too weakly rather than too strongly and refuse to contribute to an international order it did not create.

On the other hand, China knows it profited from the post-1945 Western international order. China is one of the five countries with veto power in the UN Security Council. China is now the second-largest funder of UN peacekeeping forces and participated in UN programs related to Ebola and climate change.

China has benefited greatly from economic institutions, but it has started its own Asian Infrastructure Investment Bank and its Belt and Road Initiative of international infrastructure projects that some see as an economic offensive. China has not practiced full reciprocity as a market economy, and its rejection of a 2016 Hague tribunal ruling regarding the South China Sea raised many concerns. Thus far, China has tried not to overthrow but rather increase its influence over the Western world order from which it benefits, but this could change as Chinese power grows.

The Trump administration labeled China a revisionist power, but so far – unlike Hitler’s Germany or Stalin’s USSR – it reflects that of a moderate revisionist. China is not interested in kicking over the card table but in tilting the table to pocket more winnings.

As Chinese power grows, the West’s “liberal international order” will have to change. China has little interest in liberalism or Western domination. We will need to think in terms of an “open and rules-based” world order to manage economic and ecological interdependencies like climate change.

Ideological differences will persist over values like human rights, but this should not prevent negotiations and institutions from managing interdependencies. Even as he worried about conflicts of civilizations two decades ago, Huntington proposed a “commonalities rule: peoples in all civilizations should search for an attempt to expand the values, institutions and practices they have in common with peoples of other civilizations.”

More recently, in 2017, Bill Emmott wrote in The Fate of the West: “Yes, the barbarians are at the West’s gates. Certainly, China’s pressure to dominate its neighborhood and be treated as an equal partner to the US is hard to deal with.” But in his view, “the response begins with allies, friendships and legitimacy: … the greatest assets the West has.”

And as I argue in Do Morals Matter? Presidents and Foreign Policy from FDR to Trump, the future of the West is put at risk more by the rise of nativist populism at home than by the rise of China abroad. The answer will depend on our choices.

JOSEPH S. NYE JR.
is a professor at Harvard University and author of Do Morals Matter? Presidents and Foreign Policy from FDR to Trump (Oxford University Press, 2020).

The West and the search for its future

By Peter Koepf and Lutz Lichtenberger 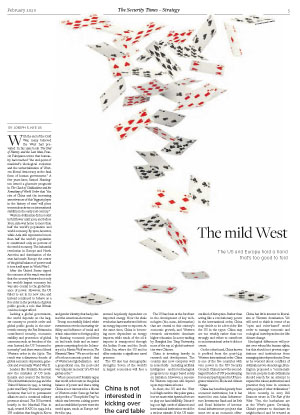