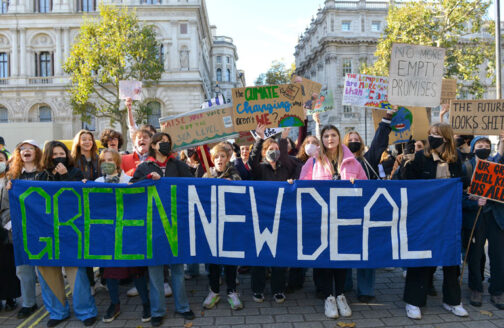 A Russian invasion of Ukraine, reminiscent of the 2014 incursion, is a real possibility. With Russian forces once again massing on the Ukrainian border, the European Union must take heed of Ukraine’s security concerns. Appeasement of the Kremlin would have disastrous consequences – not just for Ukraine but for the whole of Europe, as well as for countries farther east such as Kazakhstan.

To shield Ukraine and other countries previously in Moscow’s orbit, Western allies must understand that Russian aggression is not limited to tanks and troops. The Kremlin’s hostilities towards Ukraine run deep and are part of a broader pattern of belligerence, which includes economic warfare, cyber-attacks by state sponsored hackers and energy blackmail.

Russia is using gas as a political weapon at a time when Europe is being hit by a crippling energy crunch. This is not a new tactic and Ukraine is by no means the only victim. A few months ago, Moscow weaponized the energy card to discourage the new pro-EU Moldovan government from strengthening links to the bloc. Beyond pipeline politics, Russia has threatened Ukraine’s territorial integrity through underhanded economic warfare aimed at forcing the Ukrainian Government into a financial cul-de-sac. These pressure tactics have included tightening customs procedures that lead to long delays for exporters at the border, imposing import bans for Ukrainian products and launching campaigns to shutter factories in Eastern Ukraine. Some of these flashpoints are taking place on neutral turf. Ukraine is currently waiting to learn the judgment of a UK Supreme Court hearing linked to a $3 billion loan. Ukraine accepted the loan from Russia under extreme duress in 2014, months before being invaded. Now Moscow is insisting that Ukraine settle up – a morally and geopolitically outrageous demand given the hundreds of billions that Russia has violently extracted from Ukraine since the loan was made. Russia’s current troop mobilization and its latest threats should therefore be taken seriously – and put into context. According to a recent report published by the Thomas More Institute, Russian aggression against Ukraine has cost the latter at least $120 billion, as a result of asset seizures and loss of tax revenues in Crimea and Eastern Ukraine and the subsequent impact on trade and investment. This, of course, is just the stone-cold economic analysis. The human toll has been far greater, with 14,000 dead and counting.

So where to go from here? We have seen how the threat of invasion is activated every time President Putin seeks to squeeze concessions from the West. Even if current tensions do not boil over into full-fledged war, Ukraine will remain under Moscow’s thumb unless decisive action is taken.

The European Union has the tools and political muscle to push back – but can it act fast and decisively enough? The EU must carve out a new strategic framework for dealing with Russia. In the first instance, Brussels should unpack its regulatory toolbox and continue the diversification and unbundling of energy markets. Working in tandem with France, the German government should open the door to tighter regulation of Nord Stream 2 and strongarm Gazprom into supplying gas to the Russian-Ukrainian border. The recent suspension of Russia’s Nord Stream 2 pipeline by Germany’s energy regulator sends a powerful, albeit overdue, message to the Kremlin that its bullying tactics will no longer go unchecked. The European Green Deal, tasked with meeting the continent’s ambitious climate targets, can also be used as a pressure point. Climate change creates new geopolitical realities that, over time, will cost Russia lucrative sources of income and its main means of influence.

Sadly, the region’s woes don’t stop with Ukraine. Distracted by the Russian war clouds gathering over Ukraine, the West is still trying to make sense of the largest protests in the history of modern Kazakhstan. Kazakh President Kassym-Jomart Tokayev has claimed that constitutional order has been restored and the threat to his country averted. But questions remain over his country’s credibility as a Western partner after Tokayev refused an independent investigation into the riots. Will Kazakhstan’s long-treasured stability become a casualty of the Russian-Chinese geopolitical catfight in Central Asia? Can a modernizing autocracy maintain warm relations with the West while truncheoning dissent, locking up key officials on trumped-up treason charges and temporarily inviting Russian troops into the country?

Kazakh authorities blame “armed extremists financed from abroad” for the deadly clashes that claimed the lives of at least 227 protestors in January. This vague caricature is deliberately misleading given that the demonstrations started at a grassroots level in response to a steep rise in the price of fuel. An investigation is needed into the shooting of demonstrators and the situation concerning the many detainees, including Karim Massimov, the head of the National Security Committee and former two-time prime minister, who was arrested on suspicion of treason. It is unclear why he is being detained, although there are speculations that it’s his loyalty to former President Nursultan Nazarbayev, the founder of the modern Kazakh state, or his refusal to order his men to gun down protestors.

Massimov played a pivotal role in managing the peaceful transition of power from Nazarbayev to Tokayev in 2019. His arrest should be of special concern to Europe as well as China, as he was the architect of Nazarbayev’s multi-vector foreign policy that allowed the regime to balance friendly relations with the West with maintaining strong ties to its powerful neighbors Russia and China. It was an uneasy balancing act, but one that proved successful in attracting foreign investment from Europe and strengthening economic cooperation with Beijing, while positioning Kazakhstan as a global leader in nuclear non-proliferation and humanitarian assistance.

On the domestic front, steered by Massimov’s counsel, Nazarbayev managed to loosen the Kremlin’s Soviet-era chokehold on Kazakhstan while protecting the rights of the large ethnic Russian minority. Unlike President Lukashenko in Belarus, Nazarbayev chose to keep both the West and Russia close, rather than play them off against each other. This equilibrium could now be a thing of the past. Even if Russian troops do not return to Kazakhstan, political and security dependence on Moscow is likely to remain high. For China, this new power dynamic coupled with the arrest of key ally Massimov could spell trouble for the security of its Western border.

Europe, too, should be concerned – not least because Kazakhstan is the world’s largest producer of uranium and has enormous copper, chromium and zinc reserves. Its geographic location makes it an important trading partner for Europe. Despite its democratic shortcomings, Kazakhstan is both a member of NATO’s Partnership for Peace program and an OSCE partner.

If President Putin attempts to nudge both Ukraine and Kazakhstan back into Russian patronage, or if he makes a heavy-handed attempt to recreate the old Soviet Union, it won’t just be the people of Kazakhstan and Ukraine who suffer. Putin will end up destabilizing the whole of Eastern Europe and Eurasia. The new German government should use its communication channels with Moscow to draw clear red lines that drill home the cost of Russian aggression and its toxic influence in Eastern Europe. Europe faces a dicey future indeed if the combined diplomatic and economic power of the EU, US and UK fails to deter Russia.

Oliver Rolofs is a security expert and former head of communications at the Munich Security Conference, where he established the Energy Security Programme. 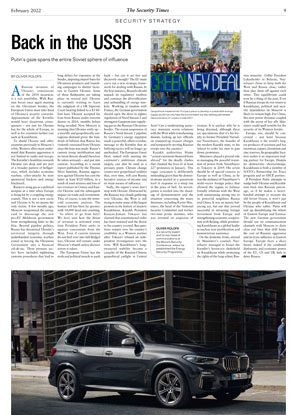