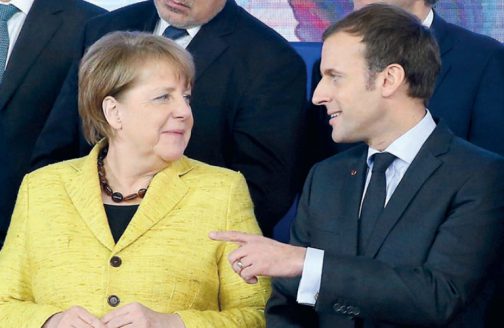 This is the hour of Europe – a unique opportunity to unite a divided continent by showing that unity is the first line of defense in a dangerous world. But thus far there is a continent-sized gulf between the European government’s rhetoric on global disorder and the unambitious, technocratic initiatives it has launched. There is still much time remaining to close it.

A thought experiment: Imagine it was still 2007, and you were asked to identify the most extreme scenario that would lead Europeans to take seriously the idea of providing for their own security. You might have suggested that they would wake up if, say, Russia invaded two of its neighbors and annexed their territory; or if the European neighborhood was afflicted by a string of proxy wars, driving millions of people from their homes, including over a million refugees to Germany alone; or if many European countries would become victims of terrorist attacks; or if cyber war had traveled from science fiction novels to the front pages of newspapers. And if what foreign intelligence agencies were fighting information wars inside the EU, and even trying to hack our elections? And if one of the EU’s two nuclear powers – the one with the highest share of the EU’s defense spending – chose to leave the EU? And then to top it all off the United States began retreating from many theaters and even questioning its commitment to NATO?

Most people in 2007 would have had to suspend their disbelief about any of these fantastic developments. Upon doing so, they might have predicted that European countries would be trying intently to tackle their vulnerabilities and launch a major new initiative to build strategic autonomy. And that is actually what happened – at least in speeches. When the horror scenarios unfolded, every one from Jean-Claude Juncker and Federica Mogherini to Emmanuel Macron and Angela Merkel have tried to awaken the “Sleeping Beauty of European Defense.” Unfortunately, the rhetoric does not yet match reality. There are two dominant paradigms for pondering European defense: promoting integration and building capabilities. But by trying to pursue both goals within its first few steps, the EU risks achieving neither.

The launch of Permanent Structured Cooperation (PESCO) triggered a big debate between the pro-integration and the pro-capability camps. PESCO now has 25 members, including some whose stated goal is to block EU integration (such as Hungary) and those whose principle goal is to obstruct cooperation with NATO (such as Cyprus). Maybe countries that fail to make progress will be expelled at some point – but that seems unlikely. As an analogy, imagine how much progress would have been made if member states had been allowed to join the euro before making reforms to meet the Maastricht convergence criteria. It is clear that the adopted model does not build capabilities.

But PESCO is equally unlikely to build unity. The development of real capabilities could have rebuilt solidarity in a union divided between north, south, east and west by showing how Europe can make a difference on the matters that most concern its citizens, from Russian aggression and uncontrolled borders to terrorism and cyber attacks. But the “fake inclusivity” of PESCO means that these issues will be addressed by small-scale technical projects rather than by a political initiative that could capture imaginations. More significantly, putting unity above effectiveness forces countries that are serious about European defense to join coalitions outside EU structures, like France with its newly launched European Intervention Initiative.

How can EU leaders launch a real security initiative to turn things around? First, Europe must look more carefully at removing the barriers to investment in military capabilities. The EU should exclude investment in European defense capabilities from the Maastricht rules and include a defense component in the next Multiannual Financial Framework (MFF). EU money could be used to form a compensation fund for defense industrial losses caused by joint procurement as well as for more generous support of states participating in EU and non-EU European military operations.

We have known for some time that the EU could achieve more capabilities for the same price by pooling and sharing its equipment. The diversity of EU weapons is six times higher than that of the US – for every model of US destroyer or frigate, the EU has seven. But most governments are more interested in the job-creation potential of procurement than in capability. Moreover, as long as governments or parliaments of member states retain veto power over deployment of their forces – which I support – a complete pooling and sharing will not increase capabilities, but rather paralyze Europe.

The famous “European army” is therefore out of the question for now. However, common investment and acquisition is much easier to push in terms of newer technologies such as cyber, drones and artificial intelligence (AI). As these technologies have not existed for long, there are fewer national idiosyncrasies to overcome. The second component should be the development of a flexible European security force. Macron’s proposal for a European Intervention Initiative is a promising start, but it is likely to fail if other member states perceive it simply as a vehicle to rally other nations to fight France’s post-colonial wars. This initiative should be widened into a broader European Security Initiative, designed explicitly to address other nations’ security concerns.

Part of this could include the establishment of a combat-ready European military force made up of soldiers from different European member states who train together and use the same equipment. This force should eventually comprise up to 100,000 soldiers and include its own separate capability. States wanting to join this force should face ambitious entry requirements, including a minimum contribution of troops and minimum defense spending. These thresholds must move beyond the flaws of PESCO.

This could be established in parallel to a stabilization and civilian component – including police, border guards and other facilities. This would not be a European army but rather a flexible force, and more importantly would leave fully functional national military forces intact. The gulf between the rhetoric of European autonomy and the reality of small-scale technical projects not only harms our security, but also threatens the legitimacy of the European project and the possibility of re-establishing solidarity through a union that protects. The EU must close this gulf now.

MARK LEONARD
is director of the European Council on Foreign Relations, which is launching a New European Security Initiative backed by several European governments and companies. 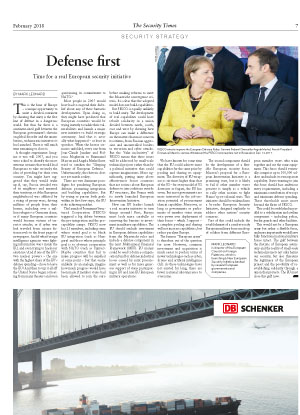