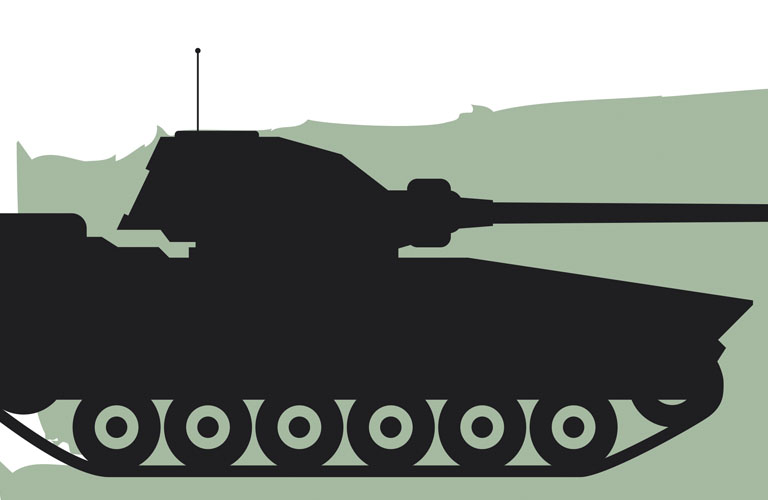 The contemporary security horizon is marked by a worrying number of negative developments. Gloomy prognoses abound. Although the details of analysis often differ quite significantly, the dismal mood is widely shared. This mood has barely shifted over the last four years. For confirmation, just consider the titles of successive editions of the Munich Security Report:

One of the most sensitive areas at the moment is arms control. It is widely depicted as being in crisis. Worse, this has unfolded amid a deterioration in geopolitical stability, with growing tensions between the United States and China and between NATO and Russia, rifts and significantly divergent perspectives within NATO, and a reordering of power in the Middle East. Moreover, the incidence of armed conflict is considerably greater than ten years ago and challenges for stability and security have emerged from climate change. These factors combine to offer a series of toxic short-, medium- and long-term prospects. Labeling the plight of today’s arms control a crisis is too generous, for there is no turning point in sight. The deterioration of arms control has developed slowly, barely noticed perhaps because its significant achievements at the end of the Cold War so successfully locked in major gains in security. As the Cold War ended, four building blocks of East-West arms control were laid on top of foundations established by the Anti-Ballistic Missile Treaty of 1972. In chronological order:

The 1987 Intermediate Nuclear Forces Treaty (INF) eliminated all ground-launched missiles with a range between 500 and 5,500 kilometers.

The 1990 Treaty on Conventional Forces in Europe (CFE) capped the deployment of NATO and the Warsaw Pact’s heavy weapons in Europe.

The 1991 Strategic Arms Reduction Treaty (START) reduced the numbers of strategic nuclear weapons, with further cuts agreed in 2002 and again in 2010 in the New START agreement.

With the 1991 Presidential Nuclear Initiatives (PNIs), the US and USSR undertook unilateral but agreed-upon actions that eliminated thousands of short-range tactical nuclear weapons.

Right now, of this range of arms control instruments, only the PNIs look to be in healthy condition. President Donald Trump canceled the INF Treaty on Feb. 1 of this year. This comes after five years of US charges that Russia was violating the treaty with the 9M729 missile (and after a shorter period of Russian counter-charges). Russia has now offered the US the chance to inspect the missiles if it can have a look at the missile defense system in Europe, Aegis Ashore, which is one object of its chief concerns. The New START agreement expires in 2021; so far, there are no talks about renewing or replacing it and little sign of interest on either side. There are also complaints by Russia of technical violations on the American side. As for the CFE Treaty on conventional forces, Russia ended its participation in 2015, claiming that when ex-Warsaw Pact states joined NATO and, so to speak, took their quotas with them, the treaty became unfair.

Looking outside the US-Russian framework, the situation on the Korean Peninsula is much less alarming after a year of inter- Korean détente and US-North Korea diplomacy. While some analysts worry that little by way of concrete achievements can be seen so far, others contend that not much should be expected so soon. They point to the longer timelines of US-Soviet détente in the second half of the 1980s, after a shorter period of hostile confrontation that had not, after all, been kicked off by open war.

While the US president has talked up diplomacy with North Korea, he has simultaneously discarded it with Iran. The Joint Comprehensive Plan of Action (JCPOA) is not an agreement exclusively between the US and Iran and cannot be ended by the US alone. The other four permanent members of the UN Security Council plus Germany and the EU are also signatories, and the deal was endorsed by UN Security Council Resolution 2231. Nonetheless, Washington’s financial power means that its re-imposed sanctions against Iran have far-reaching influence in Europe towards deterring trade and investment. The US action against Iran has been taken despite Iran having properly implemented the technically sound agreement, with the result that, if it were indeed interested in moving along the pathway to nuclear weapons capacity, it could not. Furthermore, Iran has never acknowledged or been proven to have either nuclear weapons or nuclear ambitions.
The contrast with North Korea, which is proud of its nuclear weapons capacity, and, more particularly, with the US treatment of the country under this presidency, is striking. It may also be educational in a very negative sense. Unlike a half century ago, when the Nuclear Non-Proliferation Treaty (NPT) was about to enter into force (signed in 1968, in force from 1970), analysts today do not have a long list of potential nuclear proliferators. Back then, there were concerns that about 12 to 15 more states could go nuclear on top of the five declared nuclear weapon states (plus Israel, secretly). The emergence of just three since then – India, Pakistan and, most recently, North Korea – shows that non-proliferation, like nuclear arms control, has a history of a reasonable degree of success. But there may well be another possible proliferator out there; capabilities certainly exist. For states that may be considering going nuclear, the contrast between US behavior towards Iran and towards North Korea may bear an all too simple
lesson.

Nonetheless, there is marked impatience among many governments that nuclear reductions have not gone further. The NPT swings on a bargain in which the nuclear have-nots agree to remain have-nots as long as they can have access to nuclear power for peaceful purposes and, crucially, as set out in Article 6, as long as the nuclear weapons states move in the direction of nuclear disarmament. The argument of many of the nonnuclear weapons states is that the nuclear weapons states have not been faithful to Article 6.
Whether this erosion of support for the NPT produces a functional weakening remains to be seen. A considerable number of the NPT Review Conferences – held every five years – have been quite fractious affairs. The most recent one ended without any statement agreed upon by the conference; there was not even agreement on the nature of the disagreement – or at least not one they would all sign. The next NPT Review Conference is scheduled for 2020.

Impatience over nuclear weapons states not fulfilling Article 6 helped produce the Treaty on the Prohibition of Nuclear Weapons (TPNW), first signed in 2017 and not yet in force. Little about the nuclear weapon states’ response to the TPNW suggests there will be a positive, forward-moving outcome of the 2020 Review Conference. But there is still time.
Other problems exist concerning multilateral arms control, such as the non-entry into force of the Comprehensive Test Ban, the flouting of the Chemical Weapons Convention and the lack of a prepared environment for new technology developments such as autonomy in weapons systems. What is most troubling about all these developments, or non-developments, in bilateral and multilateral arms control is not just the substance of what is happening but the context.

By all indicators – the scale of arms spending and arms transfers as well as the incidence, lethality and complexity of armed conflicts – the second decade of the 21st century has been significantly less secure than the first. And the third and fourth decades will likely see new pressures piling up.
In the last couple of years, it has become clear that some of the effects of climate change are unfolding faster than anticipated. Recent research shows that the interaction between climate and other environmental variables, such as the loss of biodiversity, could produce complex tipping points with unpredictable results. The impact of arriving at these tipping points is barely discussed in contemporary politics yet could determine much of what happens between now and mid-century.

Considerable concern has been expressed about the existential threats to Small Island Developing States (SIDS), some of which could become fully immersed in seawater. Of a total population of SIDS at roughly 65 million, about 20 million people live in areas at risk from sea-level rise. Nine states are facing an existential challenge; their combined population is 2.3 million people.
However, while the problems of SIDS demand urgent action, the statistics pale in comparison to the fact that over one billion people currently live in low-lying coastal areas. If major coastal plains and cities start facing inundation, what happens to agriculture and what happens to habitat? If governments lack resources, will or enough foresight to respond in ways that protects their citizens’ well-being, what happens to political stability? And then international stability and security?

The only answer can be that international stability will increasingly depend on broader and deeper international cooperation. It will have to reach far beyond traditional alliance relationships. It will need to set aside long-standing antagonisms. Geologists have named our era the epoch of the Anthropocene, a word stemming from the fact that human activity is the dominant influence on climate and the natural environment. We face the challenges of this era with an idea of geopolitics and international relations that is inadequate for providing security today, let alone tomorrow. That defense capabilities will in any event have a place in security provision seems clear. However, the idea that security can be provided without strengthening international cooperation is a delusion.

The point about cooperation is that it cannot be left until tomorrow. It takes time to learn and re-learn the habits of cooperation as well as to abide by formal rules and informal institutional norms designed to prioritize not individual advantage but shared benefit.
This is not the direction our current geopolitical climate is heading. The leaders of the three great powers are alike for seeking cooperation only when it suits them and institutional engagement primarily when it favors them. The result is intermittent toxicity in international politics. This, in turn, undermines opportunities provided by an otherwise strengthening United Nations that is focusing more than before on the intersecting issues of preventing violent conflict and acting on climate change. The most important shift in security thinking now required is towards a greater emphasis on institutions – and thus on rule of law and cooperation – and away from the arbitrary behavior of the great powers and the dependent alliance it creates.
Back to arms control then. We need Russia and the US to cease their sniping, resolve the technical issues and return to a more stable arms control relationship. We need this not just because a world without common restrictions and restraints is dangerous – a fact political leaders knew 30 years ago and should remember today – but also because today’s world needs international cooperation more widely and deeply than ever before. 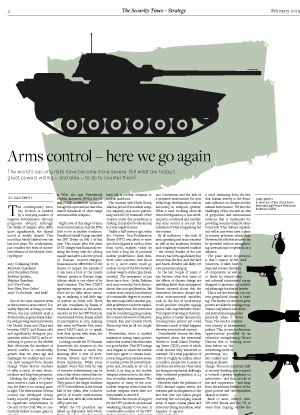