The conflict in Eastern Ukraine is in its fourth year. More than 10,000 people have died so far, and the number of ceasefire violations is on the rise. The humanitarian situation is dire, especially for people living close to the line of contact. The area around the line is polluted with land mines, leading to civilian casualties and making it difficult for farmers to use their land. Moreover, critical infrastructure close to the line of contact has come under fire, cutting off water, electricity and gas and risking ecological disaster.

In addition, one of the few coordination bodies between Ukraine and Russia, known as the Joint Center for Control and Coordination (JCCC), has been rendered all but useless by Moscow’s decision in December 2017 to withdraw its officers. This makes it more difficult to reach local ceasefires and is a further impediment to ensuring the safety of the civilian monitors from the Organization for Security and Cooperation in Europe (OSCE).

While the situation remains dangerous, the conflict has largely slipped out of the public eye, as global political leaders have become preoccupied with a series of other challenges.

For the sake of European security and the future of Ukraine, the conflict cannot be allowed to fester. But what can be done?

First, the Minsk Agreements must be implemented fully. They foresee a ceasefire and a series of steps to be taken by Ukraine and Russia to settle the conflict. However, implementation has reached a deadlock as Ukraine and Russia have opposing positions on the sequence of necessary steps. Kiev is requiring a list of security aspects to be implemented before agreeing to Moscow’s political demands for local elections in Donbass and special status for the region. The list includes full implementation of the ceasefire and the withdrawal of foreign troops and weapons. The significant lack of trust between the two sides has discouraged any readiness for compromise.

Second, international diplomatic efforts should be revived. The Normandy Format (Russia, Ukraine, France and Germany) has weakened due to domestic political deadlock in Germany following unresolved parliamentary elections and a seeming reluctance by France to take a more active role.

Third, close coordination between former US Ambassador to NATO Kurt Volker, appointed Special Representative for the Ukraine Negotiations by US Secretary of State Rex Tillerson in July 2017, and the Normandy Format is vital. Volker has held several meetings with Vladislav Surkov, Putin’s personal adviser on Ukraine. They are currently both working on reconciling different views on a proposal made by President Vladimir Putin for a UN Peacekeeping Mission in Eastern Ukraine.

While the views are still far apart, Volker took up the issue again during his latest meeting with Surkov in Dubai on Jan. 26, 2018, and the idea seems still to be alive. There is hope that under the right circumstances, an armed UN peacekeeping mission could help unblock the impasse with regard to the Minsk Agreements. While this is still a controversial discussion, some experts believe that such a mission could help create security in Eastern Ukraine, which Kiev has been demanding for some time. This in turn would enable Ukraine to move forward on implementing the political aspects of the Minsk Agreements, such as the holding of the local elections Moscow is asking for.

The UN peacekeeping mission would have to be deployed throughout the entire territory of Donbass – including at the Ukrainian-Russian border – to prevent the continuous flow of arms, military equipment and soldiers. It would also have to serve as more than just a protection force for the civilian monitors of the OSCE. The OSCE Special Monitoring Mission (SMM) to Eastern Ukraine has been on the ground since the start of the conflict and has established a valuable basis of trust with all sides. Through its daily reporting, the SMM currently provides the only reliable source of information about events on the ground in Eastern Ukraine. It will thus be important to establish close coordination between the UN mission and the OSCE SMM from the outset. There is hope that with a more secure environment, the OSCE monitors could fully carry out their mandate. As it is now, their mission is often impeded and the monitors are frequently threatened at gunpoint.

Finally, the bigger challenge is to address the underlying tensions and mistrust at the core of the conflict between Russia and the West. Russia considers Ukraine a buffer between NATO and itself and is wary of losing any distance between its own territory and that of the Alliance. This begs the fundamental question of whether the current Euro-Atlantic security architecture meets the security demands of all key players – an issue that must be resolved at some point in the future.

STEPHANIE LIECHTENSTEIN
is web editor-in-chief of the Security and Human Rights Monitor.

Beijing’s plans for a globalization that is more open, inclusive, and beneficial for all 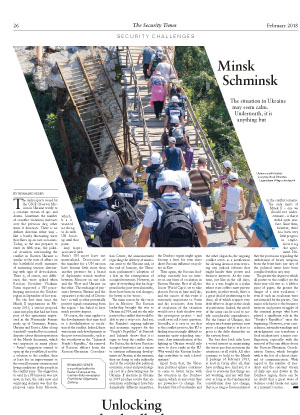