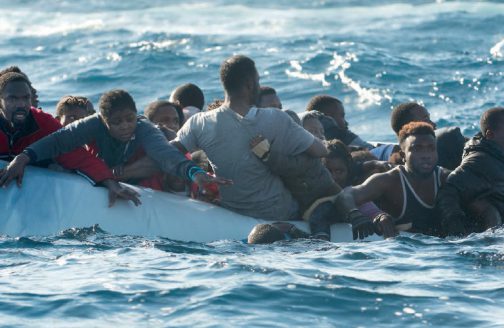 Making sense of Libya through the lens of the nation state was never easy. This has been all the more true since 2011 when the country plunged into chaos and violence, triggering seven years of multi-layered intra-state conflicts, the proliferation of non-state actors, external interference and regional rivalries. The outcome has been the disintegration of the Libyan state in all but name.

But rather than targeting efforts on (re)constituting state institutions and governance with a view to achieving sustainable stability, most external interventions have focused almost exclusively on security and migration control. These two issues unquestionably affect European interests at their core. But the myopic way they have been addressed risks jeopardizing the very construction of a sustainable Libyan state.

Since September 2017, UN Special Envoy Ghassan Salamé has launched a new round of the Libyan political dialogue process. The roadmap guiding this work is centered on three goals: achieving a new constitution, fostering national reconciliation and holding elections. While there is little clarity about the timing and sequencing of these goals, holding elections by September 2018 has become the new mantra among Libyan politicians and international players.

Nevertheless, in light of the persisting violence, few genuinely believe that Libya can meet the technical, legislative, political as well as security conditions to go to the polls. Trapped between an unclear sequencing of political goals and ongoing instability on the ground, the renewed dialogue process in Libya has witnessed scant concrete action as of late.

By contrast, genuine action has marked the security and migration dossiers. Europeans are increasingly concerned that following the territorial defeat of the Islamic State in Iraq and Syria, Libya will become the primary safe haven for terrorists fleeing the ranks of the IS after the fall of Mosul and Raqqa. Indeed, Libya is an obvious destination for such groups given its condition of “limited statehood” and its hosting of jihadist groups made up of indigenous people and foreigners.

One need only recall the case of the Islamic State in Libya, whose activities have picked up again only a year after Sirte’s liberation in early December 2016. At the regional level, around 25,000 to 30,000 foreign jihadist fighters are expected to seek their way home, with Libya representing both an appealing transit country as well as a logistical hub for launching terrorist attacks in Europe or elsewhere in North Africa and the Middle East. Against this backdrop, stabilizing Libya is rightly viewed as imperative.

However, the lack of national institutions in the country coupled with the sense of urgency posed by the terrorist threat has led the international community and regional players to bypass national authorities in engaging directly with local non-state actors – including militias – as a more effective way of delivering short-term security. Doing so has delegitimized those fragile national institutions the international community in principle supports and empowered further local actors. In other words, the pursuit of short-term security risks jeopardizing the strategic goal of state-building in Libya, which is critical to long-term security in Libya, Europe and the entire region.

The case of migration presents a similar paradox. The perceived migration crisis in Europe, and most acutely in Italy with its disproportionate exposure to irregular flows, has elevated migration control to a top policy priority. This has created an irresistible temptation for European political leaders, notably Italy’s no-nonsense Interior Minister Marco Minniti, to seek the cooperation of a wide range of local actors in Libya in pursuit of stop-gap measures.

The significant drop in the number of migrants reaching Italy along the Central Mediterranean route in the second half of 2017 – with an 83 percent reduction in August arrivals in Italy compared to the previous year – has been the result of the co-option of militias previously enmeshed in the smuggling and trafficking business. This co-option has taken the form of cash incentives to local elites and militias, offering them – and the population they cater to – less illicit forms of livelihood.

Minniti does not deny the short-term benefit of such forms of cooperation, which may be necessary to diffuse the perceived crisis and thus hopefully create the political conditions for more structural long-term measures. Alas, the reverse may well occur, with the empowering of local militias for the sake of migration control further debilitating those national institutions the international community claims to support.

In parallel, the international community, with Italy at the forefront, has sought to strengthen the capacities of Libyan security forces – most notably the Libyan Coast Guard – with a view to stemming migration flows. While a coast guard may be one feature of a functioning state, it is hardly the first institution to consider in the context of genuine state-building efforts.

In a fragmented context such as Libya, the local level cannot be ignored. But the perceived urgency of dealing with terrorism and the so-called migration crisis has led to a disproportionate empowerment of such local forces at the outright expense of central state institutions. Any strategy of co-option tends to empower certain groups at the expense of others, thus fueling further confrontation. The fight against jihadist terrorism and the management of migration are unimpeachable goals. Yet pursuing them in a hyped and securitized political and media climate has minimized space for a meaningful Europe-backed, UN-led transition and reconciliation process.

Terrorism and uncontrolled migration are two very different symptoms of broader problems stemming from the prolonged lack of a functioning Libyan state. Filling this gap is only possible through a constitution, national reconciliation and elections. In addition, Libya’s European partners should demonstrate that they care about the future of the country through the meaningful broadening of their footprint and their engagement with Libya beyond security cooperation and the management of migration. Addressing the ongoing humanitarian crisis in the country, particularly in the south, is a key priority for the Libyan people.

Enforcing security and controlling migration should not be the only two lenses through which Libya is viewed and approached. Doing so not only means relegating the country to a future of state implosion and perpetual conflict; it also means – paradoxically – that both terrorism and uncontrolled migration will remain European challenges for many years to come.

SILVIA COLOMBO
is head of the Mediterranean and Middle East Program at IAI.

NATHALIE TOCCI
is director of the Istituto Affari Internazionali (IAI), honorary professor at the University of Tübingen and special adviser to EU HRVP Federica Mogherini. 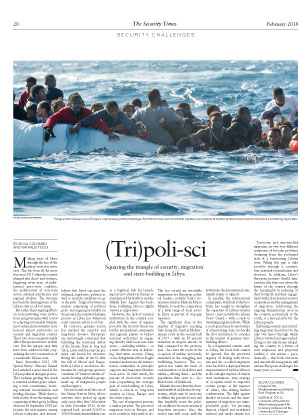