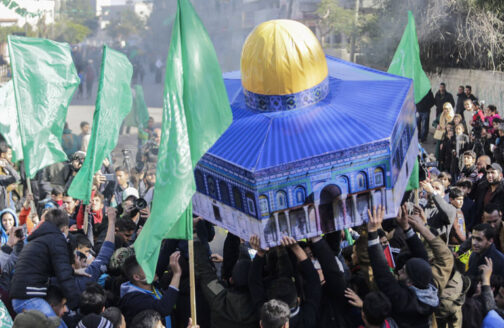 When Federica Mogherini became the European Union’s High Representative for Foreign Affairs and Security Policy in November 2014, she was optimistic about the future of the Israeli-Palestinian relationship. At the time, she suggested that it might even be possible to reach a two-state solution within her five-year term. Today, Mogherini’s successor, Josep Borrell, has taken over the reins at the EU foreign office, and there has been no progress whatsoever on the Israeli-Palestinian front. It is also highly doubtful that President Trump’s recently published Middle East Peace Plan will bring the parties any closer to resolving the conflict.

In fact, the word “peace” is seldom heard these days in the public debates on both sides. For domestic political reasons alone, neither Israeli Prime Minister Benjamin Netanyahu, who remains in office even after being indicted and is seeking re-election on March 2, nor the 85-year-old Palestinian President Mahmud Abbas, who last received direct legitimization from Palestinians in the West Bank 15 years ago, are in any major way interested in a process of reconciliation.

From today’s perspective, the Oslo Accord signed by Israeli Prime Minister Yitzhak Rabin and PLO chief Yasser Arafat on the lawn of the White House in 1993, belongs to a bygone era. At that time, the hawks in Rabin’s camp were convinced they had reached a point where Israel was strong enough to deter its Arab neighbors from plans to wipe it off the map. According to this logic, the historical compromise with the Palestinians would ultimately bring Israel more security and more “normalcy.” A lot of water has passed under the proverbial bridge since then. Today, many Israelis have adopted a narrative that is not entirely unjustified, namely that whenever their army withdraws from territories – for example, from Lebanon in 2000 and the Gaza Strip in 2005 – the tendency is for Islamists to then take control in those areas and maneuver into a better position to attack Israel. In this case, however, security concerns also overlap with ideological claims.

This is why the remarks made in November by US Secretary of State Pompeo came at just the right moment for Israelis in the right-wing camp. Pompeo announced that the US would no longer categorize West Bank settlements “per se” as illegal. Since then, particularly in radical circles in Israel, demands for the immediate annexation of large areas of land are being expressed in increasingly loud tones. However, in each of these cases – with the exception of some rather adventurous transfer plans – these radical voices have yet to provide an answer to the question of the status of the Palestinian populations residing in these areas. Rabin’s basic premise that the Israeli state cannot be simultaneously Jewish, democratic and all-embracing continues to apply to this day. This premise is also ultimately accepted by Israelis who see it as their historical birthright to settle on biblical soil. In other words, in order to safeguard the Zionist project, they see it as necessary to separate from the Palestinians.

Among those who adhere to this school of thought is Benny Gantz, Netanyahu’s challenger from the Blue and White party. Gantz vaguely embraced the “important statement” from the US government, noting that it demonstrated America’s firm stance alongside Israel and its “commitment to the security and future of the entire Middle East.” In Gantz’s opinion, however, the fate of the settlements should be decided by agreements that “meet security requirements and can advance peace.” In other words, if Gantz happens to become the next Israeli prime minister, it could mean a change of course in the Israeli-Palestinian relationship. Indeed, if he succeeds in forming a more centrist government and relegating right-wing forces such as the Palestinian-American commentator Daoud Kuttab to the sidelines after a decade in power, it wouldn’t necessarily deliver an overnight breakthrough, but it might mark the beginning of a brand-new peace process.

If this were to occur, the next question would be who exactly the Israelis would meet at the negotiating table. The Palestinians are still deeply divided into two political camps. Hamas, an Islamist party, has ruled in the Gaza Strip since 2006, while President Abbas’ Fatah party remains in power in the West Bank. New elections have been promised and, this time, all sides have stated at least their theoretical desire to participate. However, both camps are struggling for legitimacy in the eyes of their own populations, and many Palestinians would like to see new forces come to power.

In order to counter growing criticism of the Hamas regime, its leaders will have to do a lot more for the two million people in their charge. It is no longer enough to rally these people – most of whom are barely eking out a living in the Gaza Strip – in hatred of the Zionists. This is the reason why Hamas held back during the last exchange of blows between Israel and Islamic Jihad in Gaza, thereby proving that it is capable of creating and maintaining an atmosphere of calm. A long-term cease-fire between Israel and Hamas under the aegis of Egypt and with the help of UN Special Representative Nikolay Mladenov has been under negotiation ever since. If this succeeds, it could mean at least a few years of rest for Israelis living on the edge of the Gaza Strip – that is, no siren alarms and rocket fire. In return, the population in Gaza would have the opportunity to recover economically and take advantage of increased freedom of movement. This would by no means be the equivalent of peace, if only because Hamas would not be obliged to recognize Israel. At the same time, however, an agreement such as this would enhance Hamas’ standing both domestically and internationally.

And now, just in time for Israel’s third election within one year, Washington has re-entered the game with its long-awaited Middle East Peace Plan. As expected, the plan is more strongly in line with the views of the Israeli right than all previous US drafts. The plan also displays Trump’s desire to help his friend Netanyahu politically while simultaneously mobilizing American evangelicals for his own re-election in the fall.

Beyond this, however, it remains highly questionable whether this move by Trump can actually achieve a breakthrough. As expected, the Palestinian leadership immediately rejected the plan. At the same time, they also had to acknowledge a loss of standing. Since the onset of the Arab uprisings in 2011, many have viewed the Israeli-Palestinian conflict as just one of several conflicts in the region. The authors of the US plan are relying on the plan being accepted by those Arab states whose interests coincide with US and Israeli positions regarding Tehran. To date, such voices have been very restrained, if heard at all. Although the number of optimists has declined over the years, such hopeful voices argue that the plan has at least brought the issue back onto the table and that it could lead to the resumption of a peace process. But that will also depend on the results of the elections in Israel and the US. At this point, it would be wise for the Palestinians to take time to reflect on and perhaps even question their past political strategy of categorically rejecting proposals – some of which were better than what lies before them today.

Ultimately, a renewed peace process cannot get underway without the participation of the two parties directly involved. These days, it looks like neither the time nor the region is ripe for that step.

GISELA DACHS
is a long-time Israel-based correspondent for the German weekly Die Zeit. She is now a senior lecturer at the European Forum and the DAAD Center for German Studies at Hebrew University in Jerusalem. 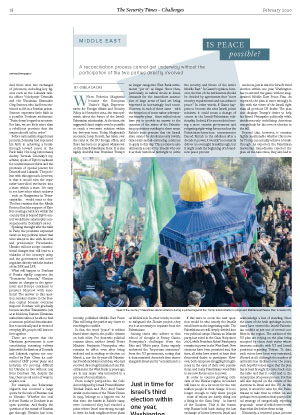