In the nearly three decades since the collapse of the Soviet Union, Russia’s relationship with the West has undergone a dramatic transformation – from establishing economic ties the 1990s to being partners in the wake of 9/11 to once again being adversaries in the post-Bush era. There’s plenty of blame to go around, not least the absence of even considering true reconstruction of the former Soviet states after collapse. But many of these shifts have to do with the political trajectory of one Vladimir Putin, who has gone from relative unknown to the longest-serving leader of Russia since Joseph Stalin. And with Putin’s announcement earlier this year of forthcoming constitutional changes, he has signaled that he has no intention of relinquishing power when his term ends in 2024, even if he does give up the presidency.

With all that in mind, here are five key trends likely to shape the “hot peace” between Russia and the West in the coming years.

1. Russia will continue to seek tactical wins it can score internationally, enabled by a US pullback from global leadership and inevitable foreign policy missteps taken by the West more generally.

Putin has been quick to take advantage of the US pullback from areas where it once played a dominant role. It has also taken advantage of those cases in which Western powers have not fully committed themselves (e.g., Syria and Libya). This also includes Ukraine, though there the cost to Russia has been higher in lives lost, budget outlays and in terms of sanctions (more on this below).

More generally, Putin has sought opportunities to improve Russia’s position in key regions, at limited financial or military costs. In so doing, he has succeeded in raising Russia’s profile in the Middle East as a diplomatic broker, and as an intermediary of the war in Syria. Similar moves are being made in parts of sub-Saharan Africa, and with Russian support for Nicolás Maduro in Venezuela. These have increased Russia’s clout on the international stage – not to the level of the United States or China, but to a notable degree nonetheless. This feat is made more impressive by the fact that while the US and China are the two largest economies in the world, Russia ranks 11th, behind countries like Brazil and Canada. Russia will continue looking for such low-risk, high-reward opportunities for intervention. Putin is also primed to take advantage of the continued souring of US–EU relations during the Trump era. Which brings us to…

2. Europe increasingly desires a return to some sense of normalcy. That will be difficult given just how much division there currently is within the EU, Germany’s weakening leadership of the EU and, of course, Trump. All of which plays into Russia’s hands.

Since 2014, Europe has been rigorously debating the proper response to Russian actions in Ukraine and other malign activities in Europe (election interference, targeted or attempted killings of émigrés). There are many states (Hungary, Italy and, most recently, France) that want to forge closer ties with Moscow, while Poland, the Baltic States and the UK have been far more hostile toward a rapprochement. Germany has shown signs of both arguments – German Chancellor Angela Merkel was instrumental in maintaining sanctions against Russia after its land grab in Ukraine, but Germany has also been the lead advocate for the Nord Stream 2 pipeline.

Ultimately, European unity will stick to sanctions, largely because they are tied so closely to the specific goal of ending the war in Eastern Ukraine. Thawing tensions between the EU and Russia will necessarily be a slow process, even if the current momentum is aimed at normalizing relations with Moscow.

3. Trump really does want to work with Putin, though the US Congress will continue to stymie such efforts on most counts.

Trump’s presidency has not produced the direct benefits Russian leaders had obviously hoped for, though Moscow has still managed to capitalize on Trump’s foreign policy – cementing its role as intermediary in Syria being the most obvious example. Also noteworthy is the fact that US-China tensions have pushed Moscow and Beijing closer together. Deep-rooted antipathy toward the Russian government remains bipartisan in Congress, and US lawmakers have built up ways to constrain Trump’s ability to unilaterally change US policy toward Russia, as demonstrated by the 2017 Countering America’s Adversaries Through Sanctions legislation. Trump can talk about improving the relationship all he wants, but it is hard for him to actually translate that into policy. Take NATO as another example. Both Putin and Trump have reservations about the organization – albeit for much different reasons – but Congress has already made attempts through legislation to limit what Trump can do to undermine the security alliance even further.

Both Trump and Putin have learned the hard way that having strong leader-to-leader relations is far from enough when at least one of those leaders hails from a robust and still-functioning democracy.

4. Russia is struggling with growing challenges at home, but Putin’s foreign policy victories are not helping.

Polling in 2019 has shown that the Russian public wants Putin to focus more on domestic issues, including an economy that is producing growth of only 1 to 2 percent a year. In general, there is limited domestic support for foreign adventures. Signs from the Kremlin suggest it has become more cautious regarding foreign engagements, both in terms of committing formal troops and getting involved in tit-for-tats that do further damage to the investment climate as the US ads more sanctions.

Still, there are limits to the impact of domestic pressures on Russian foreign policy. First, growth is sluggish, but there is macroeconomic stability – the budget has been running surpluses, currency reserves have been replenished in recent years and stand at over $550 billion, inflation has been under control, and the currency has been fairly stable. In other words, the government does not face an economic emergency, and it is in a better position than in the past to deal with an external shock. Longer term, there are legitimate concerns about stagnant growth, low foreign direct investment and demographic challenges. But the short-term state of affairs is stable enough that Putin feels he can avoid undertaking any major reforms.

Second, public opinion is not the key driver of foreign policy decisions. Putin has prioritized geopolitics over economics, at least when it comes to what he identifies as core interests, and he is not going to change course in response to polls. There are also some foreign policy priorities that will remain important enough for Putin to risk Western punishment, such as maintaining Russian influence in Ukraine and Belarus.

Going forward, the key question will be how Putin transitions his power post-2024. He is establishing a system in which he can remain highly influential even after he (presumably) leaves the presidency that year. How and indeed if he disperses power remains unanswered by the recent changes. But foreign policy and security questions may be among the very last things he is willing to surrender.

5. Russia must increasingly worry about being dominated by China – a reminder that while Putin is playing the short-term game capably, he’s not playing the long-term game nearly as well.

The Russian government does not have an answer for how to fully address the China relationship over the long term. Russia’s hopes for China are especially high at the moment – with Western economic links frayed, China is of growing importance as an export market for energy and as an investor in a range of Russian sectors, particularly oil and gas. But the power dynamic is even starker since the days when Putin first steered Russia toward a revisionist foreign policy. The imbalance will grow even stronger as China continues its geopolitical ascent. Russia’s approach at present is to accommodate China’s growing influence in Central Asia and even in countries like Ukraine and Belarus. China, for its part, is happy to avoid stepping on Russia’s toes, even as it becomes more influential in what Russia views as its historic sphere of influence. Over time, that Chinese presence will create tensions with Moscow, and there’s only so much Russia will be able to do about that.

In short, Russia will remain an opportunist on the international stage despite the risks of blowback from citizens at home and the West more generally. But a European continent looking to stabilize itself and its greater surroundings will offer Moscow an opportunity to improve relations with a significant part of the West, even as relations between the US and Russia remain chilly. And while the current standoff between the US and China has pushed Moscow and Beijing closer together, Russia should be concerned about the long-term trajectory of that relationship – if Russia isn’t careful, its biggest challenger in this era of “hot peace” will be coming from the East rather than the West in just a few short years.

IAN BREMMER
is president and founder of Eurasia Group and GZERO Media. In 2018, he published Us Vs. Them: The Failure of Globalism.

What NATO and the EU can do to contain the threat 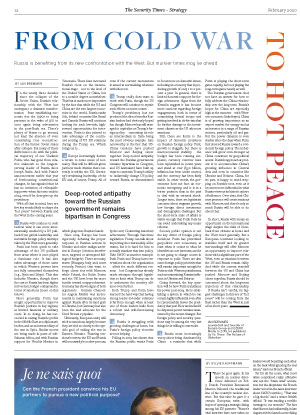