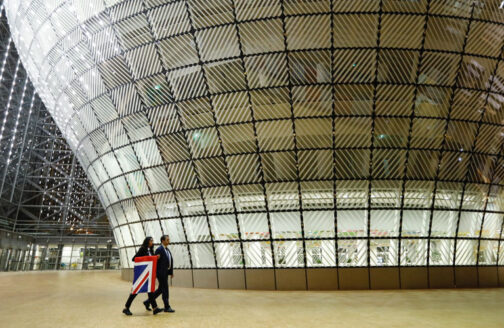 Global leaders congregating at the annual Munich Security Conference this year must wrestle with a multitude of crises. The coronavirus pandemic is imperiling people in every region of the world and may threaten global economic growth and stability. The Middle East has been upended by an uneasy US-Iran truce after the attack on Qassim Soleimani. US President Donald Trump’s ill-advised Middle East Peace Plan has exacerbated tensions, and fierce fighting in Libya, Syria and Yemen continues. Europe is wrestling with divisions over 5G, how to handle Russian troublemaking and the fact that China is suddenly at its doorstep seeking expanded influence on the continent.

Add Brexit to the list of Munich challenges that have made the first six weeks of 2020 unusually destabilizing and worrisome. While some see Brexit as yesterday’s story after the United Kingdom’s formal exit from the European Union on Jan. 31, its reverberations will be felt for months and years to come in an unsteady Atlantic Alliance.

Brexit’s most troubling impact will of course be felt by the people of the UK. While Prime Minister Boris Johnson can take credit for engineering a surprisingly swift resolution to Britain’s tortuous three-and-a-half-year debate, there are rocky waters ahead.

The UK has just 11 months to negotiate the formal terms of its divorce from Europe in 2020. These negotiations will test the ingenuity, patience and energy of both London and Brussels.

After nearly a half century as a member of the EU, Johnson must now disentangle the EU’s regulatory tentacles from the British market, initiate formal trade agreements with the EU, the US and dozens of other countries, rethink the country’s entire global network of political and commercial partnerships and decide how close to stay to the EU on issues ranging from the faltering Iran nuclear deal to climate change. He will also need to construct a renewed special relationship with a US led by the erratic and unpredictable President Trump.

Brexit’s most profound impact will be on the former global superpower assembled in the 1707 Act of Union – the United Kingdom of Great Britain and Northern Ireland. No country has played a more vital, continuous and, at times, dominant role across the world during the last three centuries. It now faces a possible fracturing and even dissolution over the next decade or two. The Scottish National Party is actively contemplating the advantages and disadvantages of seceding from the UK to join a European Union, a popular notion among Scotland’s five million inhabitants.

And could Brexit ultimately lead to the unification of Ireland with its capital in Catholic Dublin? Who would have dared predict such an outcome even five years ago? Very few of us in the sprawling Irish diaspora in North America and Australia ever dreamed that the land of our ancestors (in my case paternal grandparents) would ever see Britain’s 700-year domination of the Catholic population abated. But such is the seismic impact of Brexit and its long reach across the Irish Sea. Given the fact that Northern Ireland will remain in the EU Customs Union at a time when demographics also favor the Catholic population there, the previously powerful Protestants may slowly melt into the embrace of the more prosperous south over the next decade or two.

Beyond the UK, not enough has been made of the damaging impact Brexit will have on the European Union itself. Think of it this way: On Jan. 31, the EU lost its second largest economy, its strongest and most deployable military and its most globally oriented and sophisticated member state. Over the past five decades, successive British governments have acted to temper French statism, align at key moments with German chancellors from Willy Brandt to Angela Merkel and speak for many EU countries – such as the Netherlands, Denmark and Poland – to ensure the EU maintained close ties with the US across the Atlantic.

Since the Cold War’s end, the UK has been a dependable bridge to new EU and NATO members in Eastern Europe. It has been a strong and steady voice in arguing for stiff sanctions against a recalcitrant and avaricious Putin. The UK will be missed in Brussels, especially at a time when France and Germany are divided strategically on pivotal issues concerning Europe’s future.

American leaders in both the Trump and Obama administrations have watched the Brexit debate play out in the UK with a degree of detachment. They are in for a rude awakening.

In many ways, the UK is still America’s most trusted friend and ally. One underreported aspect of our alliance has been the decades-long middleman role played by British governments as an interpreter of sorts between Washington and Brussels. When I was Under Secretary of State, more than once I asked my British counterparts in the Foreign Office, whom I trusted completely, to pass messages to and intercede with my counterparts in Paris and Berlin during the occasional tempests we experienced across the Atlantic.

Since the 1970s, British Prime Ministers have played a unique backroom role in translating distant and often difficult-to-read Americans to European leaders on the continent and then translating French Gaullists and German Social Democrats back to Washington.

The UK’s voice and weight will also be missed in Brussels at a time when Europe is experiencing a moment of self-doubt, as Putin and Xi seek greater influence in the East Mediterranean and Balkans and anti-democratic populists across the continent challenge the status quo and the ideals of the EU itself.

Looking ahead, perhaps the most we can hope for is a period of national rest, recuperation and reflection for the exhausted British. They might then be in a better position to recover from the economic, political and social dislocation that is likely to follow their divorce from Europe.

With steady leadership in Downing Street, the UK could refashion itself as a close friend and trading partner of the EU, a strengthened and reconfirmed NATO ally, and a committed global leader of its vast and often underestimated Commonwealth.

A revived UK will be critical in helping the democratic West to meet its greatest test in the coming decades – to sustain and promote democracy, the rule of law and an open internet in the trans-Atlantic world and beyond. That is the challenge China and Russia, as well as lesser authoritarians in Turkey, Hungary and countries at Europe’s populist fringe, pose to what made the UK, the US and Europe forces for good during the last half century.

Brexit has opened up a Pandora’s box of challenges for the UK, Europe and the US. They must recognize what’s at stake and act together to defend the principles and policies at the heart of our democracies.

NICHOLAS BURNS
is the former US Ambassador to NATO. He is currently Professor of the Practice of Diplomacy and International Politics at Harvard’s John F. Kennedy School of Government. 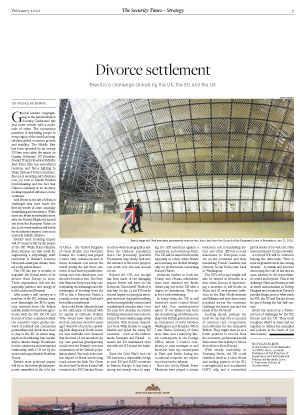