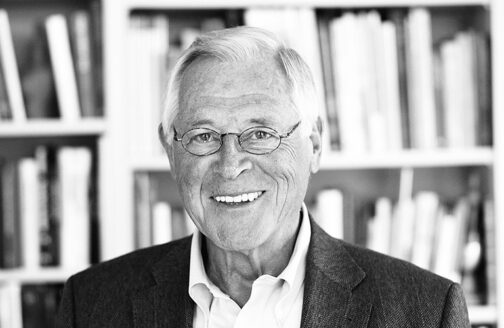 For us, Theo Sommer was always Ted.

The invitation to call him Ted was both a sign of familiarity and an expression of generosity, magnanimity and the absence of any kind of conceit on his part. People who had the pleasure of working with him never found themselves speaking to Herr Sommer, that towering figure behind DIE ZEIT. Instead, they were always inevitably talking to Ted.

Theo Sommer was the very embodiment of a journalistic heavyweight. He was stupendously well-read, pursued a wide range of interests and had infinite curiosity. Amid his pallet of favorite subjects, however, he had a unique passion for foreign policy and security issues. Indeed, despite his penchant for sober analysis and journalistic professionalism, the German-American relationship, in particular, was a subject most definitely close to his heart.

I met Ted for the first time in 1980 at a gathering of the Atlantik-Brücke in Washington. It was there that I first witnessed and understood the high esteem he enjoyed among journalists and politicians, most of whom hung on his every word. But Ted was also an excellent listener. He posed brilliant questions and was able to elicit anecdotes from interlocutors in elegant and effective ways. This skill was evidence of his mastery as a journalist, but it also came from a place of genuine interest in people and the world.

It was 2004 when we had what was for me a life-changing conversation at Hotel Palace Berlin. The war in Iraq had just driven a massive wedge into German-American relations, and the lines of communication between Germany and the US had fallen silent. Regardless of how divergent each side’s appraisal of the situation was – and in spite of the fact that the differences were by no means as clear-cut as the sides assumed at the time – it was obvious that the moment was ripe for a new journalistic initiative.

Theo Sommer and I toyed with the idea of creating a German newspaper written in English that would raise the trans-Atlantic dialogue to a new level. We decided we wanted to publish a newspaper that gave traditional power brokers in politics, business and society key insights into the motives and debates that were driving German policy beyond party-political lines. In due course both Gerhard Schröder and Angela Merkel would contribute articles to the paper.

Within a very short period of time, we’d come up with a concept and agreed on a name: The Atlantic Times would become the first newspaper of its kind in Germany.

Ted was immediately ready and willing to take on the role of executive editor, and anyone who knew Ted knows that he never considered this position to be merely ceremonial in nature. Instead, he went full throttle, heading up conferences, writing astute editorials himself and editing all other texts with his famous felt-tip pen and tireless attention to detail. For Ted, every article had to be spot on; otherwise it wouldn’t make it into the paper. In this sphere, he made no distinction between established German writers and up-and-coming interns. 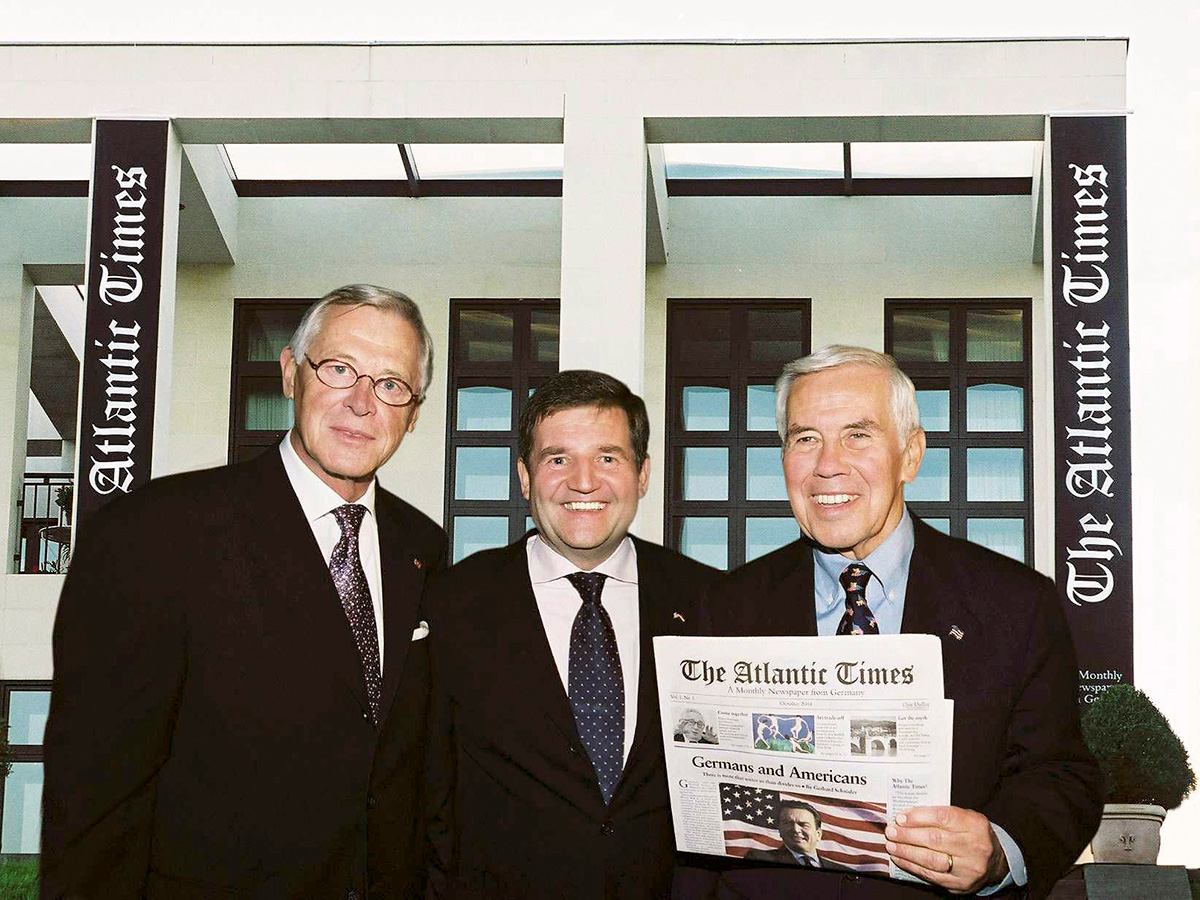 Ted presented the first issue of The Atlantic Times
with US Senator Dick Lugar
at the German Embassy in Washington D.C.
in front of 2,000 guests.

The success of that paper prompted us to launch a sister paper in 2007. The German Times was designed to do for Europe what The Atlantic Times had done for the US, that is, to be a smart and critical voice from Germany about Germany and its international role. 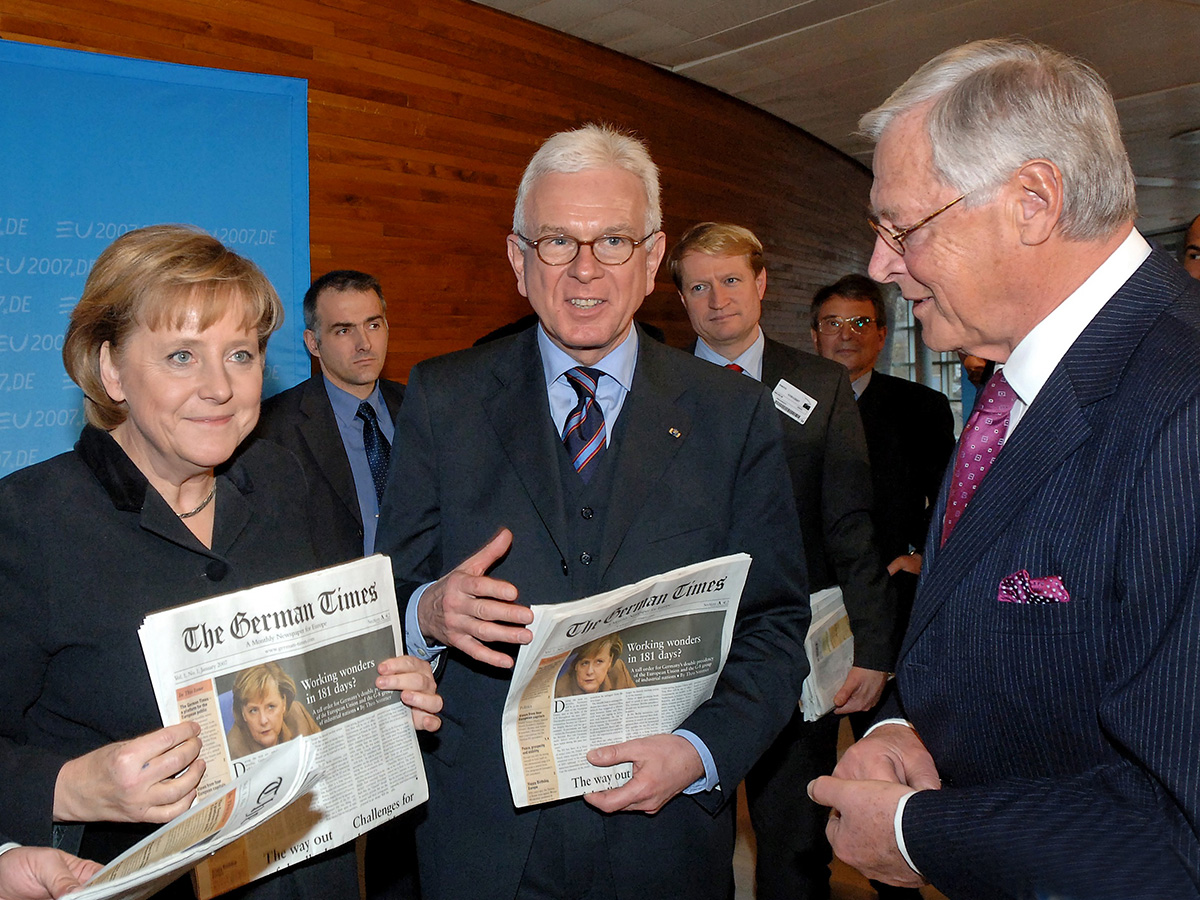 In 2007, German Chancellor Angela Merkel and
Hans-Gert Pöttering, President of the European Parliament,
joined Theo Sommer in Strasbourg
to present the first The German Times.

We eventually went on to launch The Security Times as well, which is published every year at the Munich Security Conference and features contributions by defense and security experts from across the globe. When people received an e-mail from Theo Sommer, be they such luminaries as former US Secretary of State John Kerry, CIA Director David Petraeus or Luxembourg’s Foreign Minister Jean Asselborn, they inevitably responded, often writing articles for the paper and making an annual appearance with Wolfgang Ischinger at the grand presentation on the eve of the Munich conference. 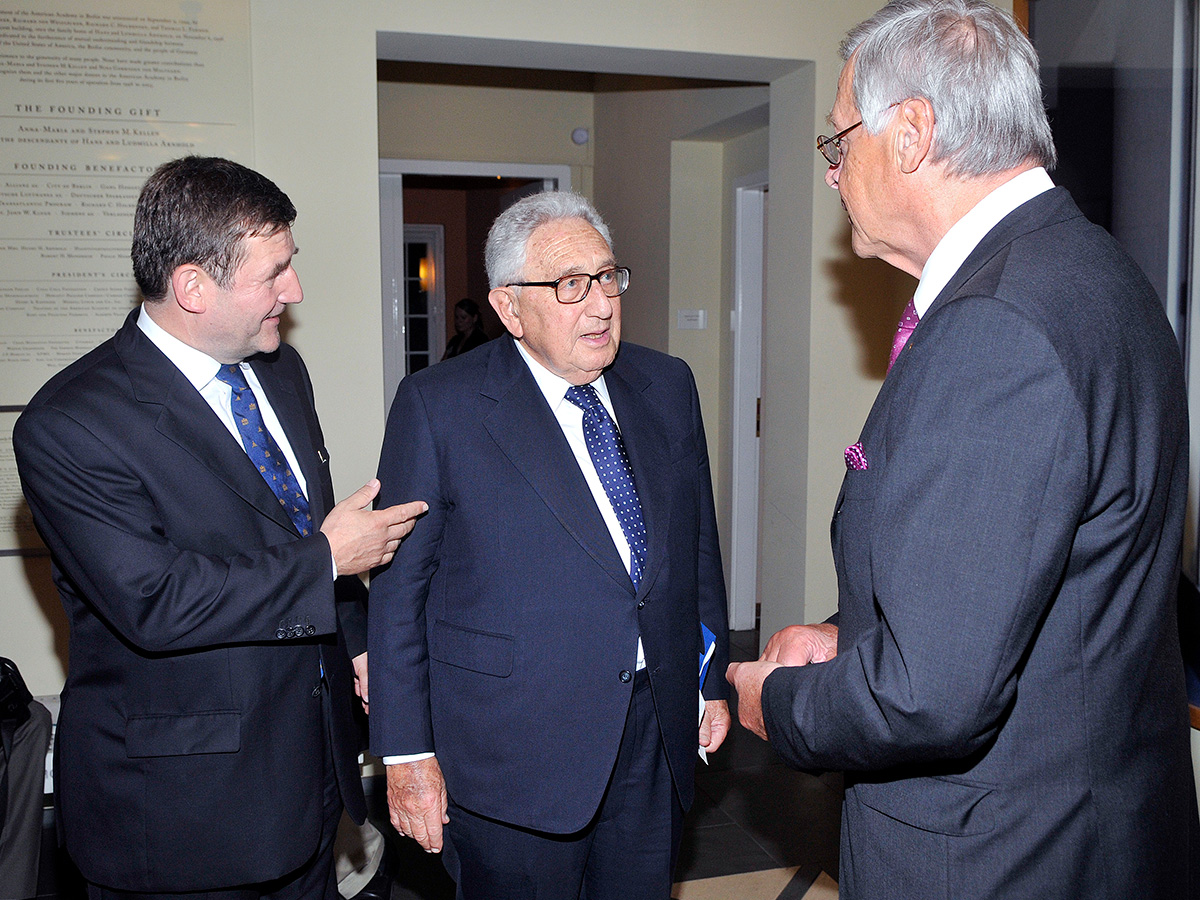 Theo Sommer and Henry Kissinger
at the American Embassy in 2008.
(At the left: publisher Detlef Prinz.)

I personally owe Ted Sommer a great deal. He was a journalistic powerhouse in the best sense of the word, a brilliant author and speaker, a great figure in German journalism – and a good friend.

His style and his spirit will live on in our Times newspapers, and we are fully committed to carrying on his rigorous approach to independent journalism.

On this path forward, there are many things in our newsroom that will continue to remind us of Theo Sommer. One very tangible ritual, in particular, will keep his spirit alive. For years at the paper, at 5 pm sharp, Ted would invite the team to join him for what came to be known as Sommer Time (Sommerzeit), which involved a glass of whiskey for anyone on the editorial staff who was so inclined. After the drinks were poured and a toast made, the team would chat energetically about the paper, inevitably coming up with better headlines, catchier subheaders and fresh new ideas.
No question about it, Sommer Time is a legacy made to last.

Detlef Prinz
is publisher of The Security Times.

Beyond trade: the confrontation between the US and China