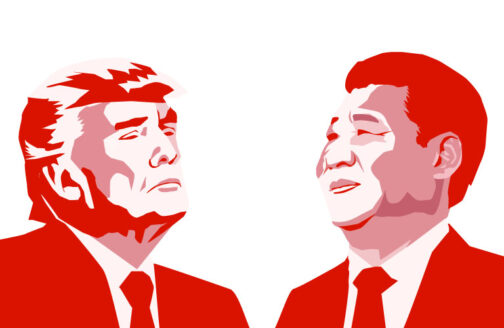 The rivalry between the United States and China has become a guiding paradigm of international relations, shaping strategic debates, but also real political, military and economic dynamics. This is not to say that competition between Washington and Beijing – or even great-power rivalries in general – determines all other international problems and conflicts. However, Sino-American competition increasingly provides the framework through which various actors view significant events and developments. At least for the US, the strategic rivalry with China has replaced the “war on terrorism” paradigm that had prevailed since 2001.

In 2017, the US government began calling China a “long-term strategic competitor” in its national security strategy. NATO, in its London Declaration of December 2019, spoke for the first time of the challenges – but also the opportunities – arising from China’s weight and international policy. China’s political elite is convinced – and probably rightly so – that the US intends to contain the expansion of Chinese influence.

Disputes over trade policy or trade balances are indeed at the forefront of public statements by US President Donald Trump and have a direct impact on the world economy. Nevertheless, trade disputes are only one aspect of the rivalry, and by no means the most important one. Only by understanding the multidimensionality of the US-Chinese conflict constellation can we find appropriate policy responses and develop the necessary instruments.

The global balance of power and the status of the two powers in the international system is one key issue. Trump seems to regard superiority, especially military dominance, as an end in itself, not primarily as a means to advance certain interests and values.

For his part, President Xi Jinping is apparently driven by a vision of an order “with Chinese characteristics” in which superiority is both a means and an end. But the competition between the rising and the established superpower also has its own economic, technological, ideological and security-related dimensions. Personalities of the figures involved play a role as well.

Influence on other states, regions and societies is yet another factor at stake. From a Chinese perspective, the US will never voluntarily grant China greater international influence. In the US, China is regarded as a revisionist power striving for global supremacy in the long term. More balanced positions exist in both countries, but their influence on the public discourse is marginal.

At the same time, perceptions of military threat are increasing in China and in the US with regard to the respective other. A classic security dilemma is gradually developing, where efforts by one state to strengthen its security reinforce the feeling of insecurity in the other.

This is particularly true in the maritime sector. China is expanding its fleet to secure supply routes, extend its influence and prevent containment by US bases and allies; the US sees China’s growing military capabilities as a threat to its own military bases and to its alliance system in the Indo-Pacific region.

Economic competition and conflicts over trade and economic policy form a real and distinct dimension of the rivalry. US criticism of unfair competition or breaches of rules by China is widely shared in Europe. The trade conflict is closely linked to global governance issues, which are of vital importance, especially from a European perspective. This applies, for example, to the future of binding, multilateral trade rules and institutions.

In contrast to the past 30 years, bilateral trade between the US and China is no longer a stabilizer with the ability to balance out political conflicts. Instead, the rivalry between the two powers will continue to have a decisive impact on international politics, even if Washington and Beijing conclude a comprehensive trade agreement before this fall’s US presidential elections.

The technological dimension of this rivalry would also survive a settlement of the trade dispute. While technological competition is primarily about the distribution of real and relative economic gains, it is also relevant to security policy and linked to geopolitical as well as political and ideological aspects, which is evident in the debate on the use of Chinese components in the development of 5G networks and other future-oriented and critical infrastructure.

Concerns are not only related to the risk of espionage or sabotage. More important, perhaps, is the fact that technology is not value neutral. The sooner technological developments touch on fundamental questions of political order – be it in data acquisition and use, artificial intelligence or biotechnology – the more strongly technological competition becomes linked to the politico-ideological dimension of strategic rivalry, that is, the competition between liberal-democratic and authoritarian concepts of society.

In the US, both the rise of China and the idea of being overtaken by the competitor are raising fears. In Europe, the focus is more on how and whether the development and export of technologies that enable new forms of social control might be used by authoritarian regimes in their own realm as well as to help promote the spread of illiberal models of government to other parts of the world.

This concern over ideological influences is not limited to one side. Decision makers in Western democracies sometimes underestimate how threatened Chinese leadership still feels by liberal values and worldviews. Human rights, the rule of law and liberal democracy continue to have strong appeal in relevant parts of Chinese society.

This explains the Chinese state leadership’s nervousness when looking at events in Hong Kong, as well as their seemingly exaggerated fear of color revolutions and their massive effort to find technocratic solutions designed to secure the rule of the Communist Party and, ideally, a “harmonious society.”

The Sino-American rivalry extends beyond the bilateral relationship. It also has global impact on, among other things, the work of international organizations and regional development, even within Europe. While the Trump administration undermines or withdraws from existing multilateral institutions, China is building new international fora and organizations that correspond to Beijing’s own ideas of order.

China also increasingly contributes to and participates in the activities of the United Nations and its sub-organizations. While the US, as but one example, has left the UN Human Rights Council, China is actively using this forum to relativize the importance of individual human rights.

The European Union and its member states are directly and indirectly affected by the Sino-American rivalry. Europe’s view of China has also become more critical, not least in view of China’s more aggressive regional posture, the authoritarian hardening at home, the spread of “alternative” (i.e. authoritarian) ideas of government in other parts of the world, and Beijing’s attempts to censor the international debate on China and its policies.

In a strategy paper published in spring 2019, the EU defined China as a “systemic rival,” as well as an economic competitor and a cooperation partner for Europe “with whom the EU has closely aligned objectives” – not least in tackling climate change and other global challenges. “Decoupling” – that is, cutting technological, scientific or economic ties with China, as advocated by various segments of the US political spectrum – is simply not an option for the EU.

Democracies will have to meet the challenge of China’s growing influence in the world and Beijing’s attempts to internationalize its own authoritarian model, while taking care not to undermine economic and technical cooperation, interdependence or the foundations of multilateral order. Under the paradigm of the strategic rivalry with China, US and US-influenced debates tend to overemphasize the vulnerabilities that come with interdependencies. The stabilizing effects of such relations, especially the interest of antagonistic powers in maintaining mutually beneficial relations, are too often forgotten. For Europe, but even more so for countries in the Asia-Pacific region, such as India, Japan, the ASEAN community and Australia, abandoning interdependent relations with China is not an option. Yet all these states can do better in avoiding unilateral dependencies.

Europe has begun to develop its own instruments for achieving a confident, prudent policy towards China, such as a European investment-screening scheme supplemented by national legislation. Europe should not only consider its own resilience vis-à-vis China; it should address its international engagement.

Many states and societies in Asia and Africa appreciate China’s economic commitment as well as its Belt and Road Initiative but fear dependence on China. The goal here is to offer alternatives without forcing or trying to pressure these states into abandoning their relations with China, which they must see as advantageous.

The EU’s connectivity strategy towards Asia as well as the infrastructure funds provided by the European Investment Bank for sustainable infrastructure projects in Africa are useful approaches. In general, European states should strengthen their practical commitments to the UN and other multilateral organizations. They will also have to fill the vacuums left by Washington’s withdrawal or lack of interest. And all the while, Europe can demonstrate in a practical sense how its understanding of multilateralism and the international rule-of-law differ fundamentally from China’s Sino-centric multi-bilateralism.

VOLKER PERTHES
is CEO and director of the Stiftung Wissenschaft und Politik (SWP), the German Institute for International and Security Affairs. SWP explored the multidimensionality of the US-China rivalry in a recent research paper titled Der amerikanisch-chinesische Weltkonflikt (The American-Chinese world conflict).

Old alliances in the age of “America First” 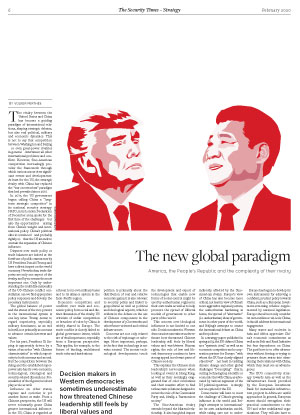