NATO and the EU can rely on Germany

For more than a decade, the strategic focus of global politics has been shifting steadily toward Asia. And yet, today, at the Munich Security Conference, the emphasis is once again on Europe. After Russia’s annexation of Crimea, which was carried out in violation of international law, and after the war in Donetsk and Luhansk, it is uncertain what the Federation’s next move regarding Ukraine will be. Either way, the threatening situation created by Moscow as a result of its massive troop presence along the border – together with its exaggerated diplomatic demands – reminds us just how fragile European security really is. Peace in Europe is by no means a “done deal.” It’s not something we achieved once and for all time. It’s something we must fight for and defend, over and over again. This requires vigilant defense, unity among allies, large-scale investment and constant diplomatic effort aimed at building trust and defusing conflicts.

Against such a backdrop, Germany once again finds itself at the center of the security policy debate. This is no surprise. Our geographical location, political power and economic strength make us a major player. The new German government, of which I am a member, is highly aware of this. We are conscious of the responsibility we bear, and we know how much scrutiny decisions made in Berlin receive.

In NATO and the EU, Germany has always shown that its commitment to and solidarity with the alliance can be fully relied upon. This is also the case today with regard to the current crisis on NATO’s eastern flank. And this applies not only to diplomatic efforts seeking to achieve peace and trust, as is the case in the Normandy Format; it also applies to the Bundeswehr, for example, in the enhanced Forward Presence (eFP) in Lithuania, where we are once again strengthening our forces. It can be seen as well in the NATO Response Force, where we stand ready to provide credible defense for the alliance and rapid crisis management and where we’re currently amid intense preparations for our obligations in the Very High Readiness Joint Task Force next year. We believe in dialogue and negotiation, but we also believe in the strength and steadfastness that allows diplomacy to succeed. Germany can do both. And we’re ready and willing to put both to work wherever needed.

We are steadfast in our commitment to the fundamental principles of peace and freedom on our continent, from state sovereignty and the inviolability of borders to the freedom of each country to choose its own alliances. We are prepared to draw far-reaching consequences if these principles are attacked. And we will make a firm contribution to ensuring that these principles are enforced over the long term. Security is and will continue to be a key challenge. And it’s not just about today’s crisis diplomacy; it’s about ensuring that our children and future generations can also enjoy the peace and freedoms we may take for granted today. We must invest in the security of our continent now to ensure that generations to come can lead good lives in freedom and in peace.

The Bundeswehr is working at full speed to meet these urgent investments. We are seeking to get the German armed forces into shape so they can effectively meet future threats. We are in the process of acquiring modern systems designed to increase our combat capabilities and consolidate our role as an alliance partner in NATO. The forthcoming replacement of our Tornado fighter aircraft fleet is one example of this, as is the procurement of armed drones and the joint Eurodrone project for the Bundeswehr. Between 2014 and 2021, Germany’s defense budget increased by 45 percent, and a substantial additional amount will be invested in 2022. I’m committed to ensuring that this trend continues in the coming years. And I know that Chancellor Scholz is on my side in this matter. All of these efforts are evidence that we’re building an armed force that is ready for action, one that we can rely on and that will also guarantee our security in the long term.

Germany is also eager to position itself clearly in conceptual terms. By the end of the year, we will have defined our country’s security policy role for the first time in the form of a national security strategy. There are two basic considerations that are crucial for us in this regard. First, we must update the concept of the networked approach – i.e., a broadly integrated security policy that reaches across all fields of action – and bring it into accord with the era in which we live. Ours is an era of global power shifts, new threats and quantum leaps in technology, an era in which climate change, economic development and global trade are just as much a part of security as migration, women’s rights and social equity.

Second, we want to harmonize our national security strategy with NATO’s new Strategic Concept and the EU’s Strategic Compass. European security and Germany’s contribution to it must form a unified whole. In realizing this goal, we will also incorporate into our new strategy the experiences gathered from joint operations in recent years. In addition, part of our responsibility to foster peace and freedom in Europe and the world involves practicing self-criticism. We owe it to ourselves and our soldiers to evaluate the sometimes-bitter disappointments we experienced over two decades of NATO operations in Afghanistan. We must take these experiences into account as lessons learned. Although we’re still at the beginning of this process, we’ve already drawn the first important conclusions. In the future, all Bundeswehr missions abroad will be regularly evaluated and recalibrated. When we send soldiers out on missions, they must be able to trust that their deployment is meaningful and that their commitment will achieve its goal. This applies to our important engagement in the Sahel just as much as to our advisory and training missions in the Middle East and our operations on the high seas. Of course, we will always conduct these evaluations in close coordination with our partners and allies.

This culture of partnership is also demonstrated by Defender 2022, the large-scale cycle of NATO exercises in Europe that will get underway this year almost simultaneously with the Munich Security Conference. As part of Defender 2022, more than 13,000 US soldiers will come to Europe by June to demonstrate – together with their comrades from across NATO – what alliance solidarity means in concrete terms. Germany is proud to participate in this military mobility as well as to act as a central hub for the alliance.

Germany as a major contributor to the power of the alliance and as an alliance member able to prepare the ground for defense-oriented military exercises that display solidarity and act as an effective deterrent – these two functions are emblematic of the role we seek to play now and in the future. They also illustrate the new German government’s security policy: Germany will continue to stand firm and steady in the alliance while remaining a partner, an ally, a framework nation and a leading authority in security matters. 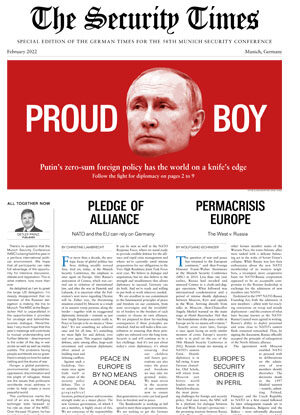