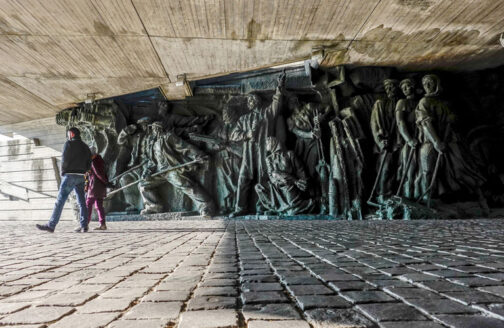 Russian President Vladimir Putin is a leader who scrupulously weighs his interests, calculating the risks of each policy and balancing them against the potential rewards. The limited military interventions pursued thus far by Russia in Georgia, Syria and Ukraine, for example, would seem to confirm this theory. But while Putin clearly sees himself as a political strategist, he also sees himself as a leading man on the stage of history. In recent years, he’s begun to see his mission not merely against the backdrop of Soviet history, but increasingly vis-à-vis the history of pre-revolutionary Russia. Rulers such as Peter the Great and Catherine the Great left indisputable marks on history during their long reigns. In Russian history books since the 19th century, the concept of “making history” has often meant “gaining Russian lands,” that is, reuniting the territories of the Kyivan Rus’ lost during the Mongolian invasions. Viewing the Russian president’s behavior in terms of his role as a historical actor means recognizing the inner tensions between that role and his more pragmatic role as a political actor, where he must weigh risks and act rationally in picking battles.

The Russian annexation of Crimea in 2014 marked a convergence of historical mission and calculated political maneuvering. In his speech to the Federal Assembly a few months after taking the peninsula, Putin emphasized the peninsula’s sacred meaning for Russia. He spoke of how the first-ever Christian ruler of the Rus’, Saint Vladimir, had been baptized in Kherson on the Crimean Peninsula, and argued that the site’s significance to Russians was similar to that of the Temple Mount in Jerusalem for Jews and Muslims. Also in 2014, in addition to this questionable attempt at historico-religious legitimation, a popular campaign was initiated in Russia that declared a broad yet somewhat unspecific claim of ownership: “Krym naš!” (Crimea is ours!). According to a poll conducted by the Moscow-based Levada Center, Russians rate the annexation of Crimea as their greatest national achievement, ahead of even the most impressive feats of Soviet space travel and Russian literature. Although the poll was conducted under the influence of state-sponsored media propaganda, the annexation of Crimea undoubtedly tapped into a widespread sense of historical ownership among Russians. In other words, in this particular case, Putin successfully fulfilled both roles — as a political and historical actor.

Historically speaking, depicting Crimea as a “proto-Russian” territory is simply wrong. This narrative draws on a mythologization of Crimea, dating back to Czarist Russia, as the “pearl of the empire” – which is also the title of Kerstin Jobst’s thoroughly readable book (Die Perle des Imperiums) examining the Russian discourse on Crimea. Russia’s 2014 annexation of Crimea was in fact preceded by an earlier annexation in 1783 by Catherine the Great, who conquered the peninsula in a war against the Ottoman Empire. Unlike the territories annexed by the Czarina as part of the partitions of Poland, however, Crimea never had any connection to Russian rule, nor was it settled by Russians. For centuries, the entire Black Sea region had been marked by widespread multiculturalism, with Crimean Tatars comprising the majority of the peninsula’s population. Nevertheless, in a manifesto issued after the annexation, the Czarina proclaimed Crimea to be – from that point on and “forever” – within the Russian Empire.

In addition to its strategic location on the northern shore of the Black Sea, its mild climate and natural beauty, it was Crimea’s significance to Europe that made it so valuable to the enlightened rule of Catherine the Great. Only after Russia had conquered the peninsula did Europeans begin to take an interest in and travel to Crimea. “Russia is a European power” was the first sentence of the famous instruction issued by Catherine the Great in 1769. The annexation of Crimea and its mythic value in Russian and European discourse seem to support that narrative.

Following its annexation, Crimea was integrated into the Russian Empire politically, administratively and economically. In the course of the 19th century, this also included the settling of Slavic-Russian and Ukrainian inhabitants on the peninsula. These settlers took up positions in state administrative offices and in the navy, especially after the Crimean War of the 1850s, which led to the flight of local Crimean Tatars to the Ottoman Empire. Russian and Ukrainian peasant families also came to settle on the peninsula. Though this radically shifted population ratios, Crimea remained a multicultural melting pot.

It was only in the 20th century that Crimea was subject to brutal policies targeting ethnic homogeneity through deportation and genocide. Before and during Nazi Germany’s attack on Crimea, the Crimean Germans and Crimean Tatars, whom Stalin suspected of collaborating with the Nazis, were deported.  The launch of the German occupation in December 1941 marked the beginning of efforts by Einsatzgruppe D of the Sicherheitspolizei and the Sicherheitsdienst, working in cooperation with Wehrmacht units, to murder almost the entire Jewish population on the peninsula. The Simferopol Massacre became a symbol of this brutality. While the German occupying force planned to settle Germans from South Tyrol to Crimea (which was renamed Gotengau), developments in the war kept the planned resettlement from taking place. In post-war Germany, Wehrmacht general Erich von Manstein, who’d commanded German troops in Crimea, was remembered more as the conqueror of Sevastopol than for any crimes against humanity. Sentenced to 18 years imprisonment at an Allied war crimes trial, he was released early in 1953 and went on to play an advisory role in establishing the Bundeswehr.

After Stalin’s death, several population groups in the Soviet Union that had been deported during the war were permitted to return to their homeland. Chechens and Ingush, for example, were able to return from exile to their North Caucasian homeland. The Crimean Tatars, however, were denied this opportunity. They continued their protests against this injustice into the 1980s and the era of Perestroika until, finally, they were allowed to return. But the influx of Crimean Tatars did little to alter the peninsula’s transformed demographics, which had been profoundly affected by World War II. After the war, Russian peasant populations settled in those areas previously populated by Crimean Tatars. This resulted in a predominantly Russian Crimea, which, according to the Ukrainian census of 2001, consisted of 58 percent ethnic Russians, 24 percent Ukrainians and 12 percent Crimean Tatars. Crimea had also become a predominantly Russophone region, as even the Ukrainians living on the peninsula spoke Russian.

Paradoxically, at the very moment in history when Crimea had become predominantly Russian, it was “given away” by the Russian Soviet Federative Socialist Republic to the Ukrainian Soviet Socialist Republic. This handing-over of Crimea took place as part of the celebrations marking the 300th anniversary of a treaty that Moscow believed had sealed Ukraine’s incorporation into the Czardom of Russia. In the Treaty of Pereyaslav, the Zaporozhian Cossaks had taken an oath of allegiance to Russian Czar Alexis in 1654. In 1954, the anniversary served as a kind of celebratory re-affirmation of the somewhat fraught friendship between the two Slavic peoples. In the early 1930s, after Stalin began suspecting Ukraine of lacking Soviet loyalty, the leadership in Moscow made decisions that led to the deaths of millions in a famine known as the Holodomor. During the anniversary celebrations of 1954, Ukraine was granted prominent status among the hierarchy of Soviet peoples, more or less second only to the Russians themselves. And it was precisely within this context that Crimea was handed over to the Ukrainian Soviet Socialist Republic.

There has been much speculation about the motives behind this gesture. One entirely unsatisfying explanation takes up the biography of then-acting General Secretary Nikita Khrushchev, who’d risen in the ranks of the Ukrainian Communist Party and who, as party head, enjoyed long-established loyalties with Ukrainian functionaries. In 1954, however, Khrushchev did not yet occupy a strong enough position of power within the party that would have allowed him to make decisions as consequential as handing over Crimea against the wishes of the Central Committee. That theory aside, there were a number of pragmatic reasons for the transfer, including the fact that it was not possible to reach the peninsula from Russia but only through Ukraine. Also, from the Russian perspective, the fact that Crimea had been considerably damaged during the war – only three percent of Sevastopol had remained intact – and would require considerable funds to rebuild may also have played a role. Indeed, after the handover, these costs would fall to Ukraine. And, finally, the fact that in 1954 the Soviet Union was at the zenith of its power and legitimacy as a supranational state rendered unimaginable the notion that it might one day fall apart – and that Crimea would become a foreign country for Russians. The handover of Crimea from Russia to Ukraine as a staged act of friendship between nations served to underscore the concept of the Soviet Union as a supranational power and was possibly intended to erase any remaining Russian-Ukrainian fissures relating to the Holodomor.

However, the totality of these explanations falls short, especially considering the great symbolic significance Crimea acquired in the Russian discourse of the 19th century. As the Ukrainian-American historian Serhii Plokhy has argued, the transfer of Crimea was a “lavish gift.” Moreover, the gift was beneficial to the gift-giver only for as long as the basic foundation of the gift – that is, the supranationality of the Soviet Union – remained intact. With the disintegration of the Soviet Union and the return of Russian strategic interests in using Black Sea ports as a naval base, this foundation disintegrated. As a result, Crimea became a key sticking point in the Russian-Ukrainian conflict. Putin’s insistence that Khrushchev had handed Crimea over “like a sack of potatoes” solely on account of his own personal ties to Ukraine is an impressive sign of this shift in perspective. In his article “On the historical unity of Russians and Ukrainians” published in July 2021, Putin denounced the 1954 gift as being “in gross violation of legal norms that were in force at the time,” as if legal norms had ever been a determining factor in the relationships among peoples living in the Soviet republics.

Russia’s current efforts to revise a European order that is based on territorial integrity and self-determination, and is anchored in the 1990 Charter of Paris, have led to a series of frozen conflicts in those neighboring states where Moscow has extended its influence as master manipulator. Only in the case of Crimea has Russia resorted to formal annexation, which points to the peninsula’s outsized emotional value in the Russian discourse. Drawing on this symbolism, Putin was able to reconcile in 2014 his competing roles as political and historical actor, scoring a “historical” success that was anchored in his rational evaluation of the risks involved. Due to the unexpectedly high degree of unity among European states in imposing sanctions against Russia in response, however, those risks ultimately turned out to be higher than originally calculated. Moreover, the initial gain in prestige Putin garnered from his subjects by retaking Crimea has ultimately faded over time.

With the current conflict, which Russia has provoked by stationing a menacing mass of troops in Eastern Ukraine, Putin will find it hard to achieve a similar harmony of political and historical roles. The objectives that are seemingly in reach – at least according to the Russian calculus – through a limited deployment of resources, such as the consolidation of the territories of the so-called People’s Republics of Donetsk and Luhansk, have little symbolic value in the Russian discourse. The only success that would count as “historic” would be the repatriation of the part of Ukraine that lies east of the Dnieper, which includes Kyiv. That, however, would involve incalculable political and military risks for Russia, which are hardly compatible with the political role Putin has played thus far.

Martin Schulze Wessel is a professor of Eastern and Southeastern European History at Ludwig Maximilian University of Munich. 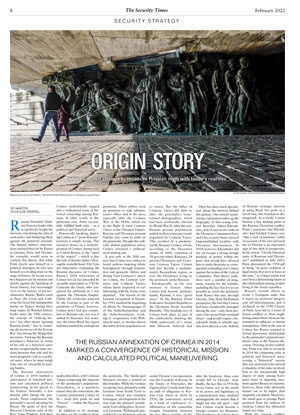