In past decades – a time we may yet come to refer to wistfully as “the good old days” – America’s national security elites have tended to be somewhat blasé about the National Security Strategy (NSS). In 1986, a Congress alarmed by US policy failures in Vietnam, Iran and Grenada had decreed that this document should be produced at the outset of each new administration to explain the principles and goals of the president’s grand strategy.

On occasion these exercises proclaimed a genuine strategic shift that would make headlines worldwide. This was the case in 2002, when President George W. Bush issued a NSS declaring that the US might undertake preventive strikes against adversaries armed with weapons of mass destruction. After appalled reactions from the international community, this never-implemented threat was retracted in the subsequent document.

Far more often they produced a stew of strategic platitudes rendered in boilerplate language, a testament to the tortuous “interagency process” by which the American federal executive explains its thinking to itself. Sometimes a paper was no sooner published than it was obviated by events.  Survivors of the process were prone to intimate in a strangled whisper that they would rather be waterboarded than have to go through it all again.

Germany’s “Iron Chancellor” Otto von Bismarck famously said that two things should never be exposed to public view: the making of sausage and the making of laws. Were he alive today, he would likely include the writing of national strategy papers.

Nevertheless, even the most jaded critics will admit that producing a NSS has its merits. On the domestic front, it helps remind the executive of the principle of separation and balance of powers; Congress will keep a watchful eye on the shaping of foreign and security policy by a president and his advisers, and it intends to use the strategy paper as a benchmark against which to measure their actions. Within the executive, it helps the national security adviser and his or her staff align other agencies with the administration’s political preferences. For the national security staff itself, it can be a useful  tool for building consensus and exerting message discipline.

Last and probably least, it lends gravitas to signals the US government sends to the rest of the globe. Thus, back when things were “normal,” the publication of a new NSS meant that analysts, journalists and diplomats the world over would heave a sigh, pour themselves some extra-strong coffee and inspect the text with a fine-toothed comb to extract any available insights into the superpower‘s latest strategic intentions.

But the Trump era is anything but business as usual. Never has an American president so recklessly dispensed with the formalities of international relations, or so liberally threatened allies and adversaries alike, from calling NATO “obsolete” to threatening Europe with trade wars and North Korea with nuclear obliteration.

Of course, unilateralism, skepticism of “foreign entanglements” (George Washington) and protectionism are American traditions as old as the republic itself. Presidents Clinton, Bush and Obama oversaw NATO (and EU) enlargement after the fall of the Berlin Wall, yet all made serious efforts to retrench the US military and diplomatic engagement in Europe.

One faction of Trump explainers in Washington – let’s call them the “nothing to see here” faction – suggests ignoring presidential language and looking instead at events, or rather everything that has not happened: NATO is still standing, they say; and what wars has he started? They also point out – fairly – that this uniquely disruptive president is surrounded by a multitude of political  appointees, civil servants and military officers, all of whom are attempting to hold the administration to standards and processes that will make it more stable and predictable.

Others have a different take: none of this is a return to normalcy. Trumpism is not the latest iteration of an American retrenchment following a period of (over-)extension. It is rather a massive and radical discontinuity. Trump is the first president to question the validity of an international order based on norms and cooperation, and the first to decry globalization as a nefarious ideology (“the false song of globalism”) rather than an economic and political fact. Furthermore, his more mainstream advisers have not managed to “normalize” the administration; at best, they have achieved less bad outcomes, such as kicking the responsibility of reviewing the Iran nuclear deal over to Congress rather than just tearing it up.

Under these circumstances, the publication of the Trump administration’s first National Security Strategy in late December of 2017 was met with significantly more than the customary tepid specialist interest. But the document does not resolve the tension between the normalizers and the radicals – indeed, it enshrines it. On the one hand, the NSS makes dozens of references to partners and allies. It also makes a point of restating the president’s late and reluctant re-commitment to the mutual defense clause in Article 5 of the NATO Treaty. On the other hand, it emphatically reinforces the dictate delivered in a now-notorious op-ed written in May by National Security Advisor H.R. McMaster and Gary Cohn, president of the National Economic Council: the fundamental paradigm of American power in the age of Trump is one of zero-sum competition rather than cooperation. And the rationale made by the NSS for US support of its allies in Europe and elsewhere is self-interested in the narrowest possible terms: America’s “allies and partners magnify US power and extend US influence.”

The NSS also insists, rather remarkably, that the institutions of domestic democracy must be made resilient to political interference from abroad. This new emphasis on challenges to US dominance by other great powers – specifically, Russia and China – was amplified shortly after publication of the NSS by the new National Defense Strategy and its motto of “compete, deter, and win.” Written at the Pentagon under the aegis of Secretary of Defense Jim Mattis, this document is notable for its embrace of allies and partners, which it describes as “crucial” to American strategy. Given the increasingly aggressive global assertiveness of both Russia and China, this re-focusing of US strategy makes sense, and Europeans can and should engage with it.

If only the commander in chief agreed. President Trump has made it clear – in his speeches on the launch of the NSS, his Davos speech and his State of the Union address – that he does not share the strategic framework advocated by his advisors. Trump continues to argue for cooperation with Putin’s Russia, and sees China chiefly as a trade adversary; the top three threats he obsesses over are immigrants, terrorists and North Korea. He remains disdainful of the notion that has underpinned US strategy since World War II: American stewardship of a liberal international order is in the American interest.

Even more importantly, Trump appears to believe that the US should to be able to use nuclear weapons, would win a trade war against China and could emerge victorious from a preventive “bloody nose” strike against North Korea. Should any of these come to pass, the world would become a different place. But even if they are avoided, the president’s inability or unwillingness to tone down his rhetoric, his overt disagreements with his advisors or his contempt for allies will lead America’s friends to hedge their bets. As for America’s adversaries, they will feel encouraged to fill the vacuum the superpower leaves behind.

CONSTANZE STELZENMÜLLER
is the inaugural Robert Bosch Senior Fellow at the Brookings Institution. 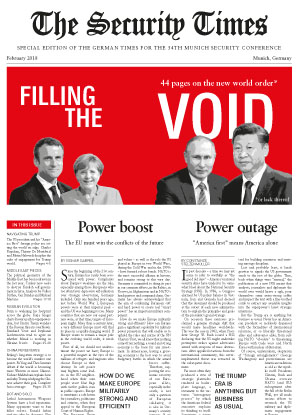