It´s not all about Donald Trump. That’s a statement more easily written than believed, given the US president’s comportment on the world stage — his tweets and taunts, his disregard of international accords, his odd choice of foes, his even odder choice of friends. But a more inward-looking US, the increasing militarization of foreign policy and shrinking space for diplomacy and multilateralism are features of the international order that predate Trump and look set to outlast him.

The first trend – US retrenchment – has been years in the making. It is a matter of degree, given approximately 200,000 US troops deployed worldwide. But in its ability to mold events, America’s influence has long been waning thanks to overreach abroad, fatigue at home and a natural rebalancing after the US supremacy of the 1990s. However nativist and intolerant Trump’s vision of “America First” may be, both Bernie Sanders and Barack Obama before him also rejected foreign entanglements during their campaigns. Trump was reflecting the public mood, not shaping it.

The second trend – the militarization of foreign policy – represents continuity as well. Trump’s taste for generals and disdain for diplomats magnifies a wider pattern. Space for diplomacy has long been shrinking. Many leaders appear prone to fight more than talk – and to fight by violating rather than respecting norms. This owes much to years of counterterrorism rhetoric, which often gives governments license to treat rivals as terrorists. It is also a product of more conflicts involving valuable geopolitical real estate, escalating regional and major power rivalries, and the proliferation of armed groups.

The third trend is the erosion of multilateralism. Where Obama opted – with mixed results – for burden sharing, Trump’s instinct is for burden shedding. But even this dynamic, too, has deeper roots. In terms of international peace and security, multilateralism has been mishandled for years. The UN Security Council’s dysfunction has left it impotent on many conflicts since the 2011 Libya intervention. Many leaders emphasize bilateral or ad hoc arrangements over multilateralism.

Then again, much of it is indeed about Trump.

Today’s most ominous threats – a Korean Peninsula war or confrontation between the US and its allies against Iran – could be aggravated by Trump. US demands – in the North Korean case, denuclearization; in Iran’s, renegotiation of the nuclear deal or Tehran’s regional retreat – are unrealistic without diplomacy or reciprocal concessions. In the former, Washington risks provoking a nuclear war to avoid one; in the latter, it risks jeopardizing a functioning nuclear deal for the sake of fruitless confrontation with Iran.

There are countervailing trends. Europeans are defending the Iran nuclear deal. President Emmanuel Macron is testing the reach of French diplomacy. International consensus on climate change has held firm. Perhaps other actors can promote dialogue and defuse crises rather than exacerbate them. These seem slender reeds on which to rest our hopes but, as Crisis Group’s list of conflicts in 2018 shows, they are for now the only reeds we have.

North Korea’s nuclear and missile testing coupled with America’s bellicosity make the threat of a Korean Peninsula war — even nuclear confrontation — higher than at any time in recent history. In response to Pyongyang’s weapons testing, the US has adopted a “maximum pressure” strategy: tougher sanctions and implicit threats of military action. Sanctions will not bite immediately, however, and ordinary citizens are certain to suffer before the regime will. Graver still, any military action by Washington would likely provoke a response from Pyongyang, risking an unpredictable escalation. All sides should use the lull during the South Korea Winter Olympics to prepare for a diplomatic initiative that includes freezes on North Korean weapons testing and some US-South Korean military exercises presaging talks toward a more durable resolution.

The rivalry is enabled by the growing authority of Mohammed bin Salman, Saudi Arabia’s crown prince; the Trump administration’s aggressive strategy toward Iran; and the end of the Islamic State’s self-proclaimed caliphate, which allows Washington and Riyadh to shift attention to Iran. Their goal – to roll back Iranian regional influence – is clear; whether they can achieve it is not. Tehran and its allies look strong. The Assad regime is prevailing in Syria. In Iraq, Iran-linked militias are entrenched. In Yemen, Tehran’s modest investment has helped the Houthis survive. Thus far, US belligerence has done little to erode Tehran’s reach. Any more determined attempt could prompt Tehran to respond through partners across the region. With so many flashpoints, and so little diplomacy, the risk of escalation is great.

Myanmar’s Rohingya crisis has entered a dangerous new phase. An August 2017 attack by the militant Arakan Rohingya Salvation Army (ARSA) prompted indiscriminate operations by the Myanmar army against the Muslim Rohingya community; at least 655,000 fled for Bangladesh. Refugees will not return unless Myanmar guarantees their security, freedom of movement and access to services and other rights, which it appears unlikely to do. International pressure is critical but unlikely to positively change Myanmar’s policies. The refugee population creates dangers for Bangladesh; tension between refugees and the host community is an immediate risk. In Myanmar, ARSA could regroup or, along with other groups, launch cross-border attacks. Implementing the recommendations of the Kofi Annan-led Advisory Commission on Rakhine State would put Myanmar on a better path

With 8 million people on the brink of famine and over 3 million displaced, the Yemen war could escalate further. In December 2017, former President Ali Abdullah Saleh announced that his General People’s Congress (GPC) was abandoning the Houthis in favor of the Saudi-led coalition; he was immediately killed by his erstwhile partners. Riyadh, encouraged by Trump’s anti-Iran rhetoric, appears determined to intensify its campaign. The Houthis will likely continue to fire missiles across the border. Negotiations, already distant, have become more complicated. The Saudis and their allies should take steps to ease civilian suffering. Were they to embrace a peace initiative, pressure to accept it would shift to the Houthis.

Afghanistan’s war looks certain to intensify. The new US strategy raises the tempo of operations against the Taliban insurgency. The aim, according to officials, is to halt the Taliban’s momentum and force it into a political settlement. However, insurgents control or contest more territory than at any time since 2001, are better equipped and can mount spectacular attacks – like those in Kabul in late January – that erode confidence in the government. The US should keep lines of communication to the insurgency open and explore a settlement with regional powers. For now, however, Trump’s statements suggest that is unlikely. The stage is set for further civilian suffering.

While President Bashar al-Assad’s regime has the upper hand, thanks to Iranian and Russian backing, the fighting is not over. Swaths of the country remain beyond the regime’s control and foreign powers disagree on a settlement. With the IS gone, risks of clashes elsewhere increase. In the southwest, Israel could take military action to repel Iran-backed militias around the Golan Heights. Turkey’s early 2018 offensive into the Kurdish-held Afrin enclave introduces a dangerous new element. A regime offensive in Syria’s northwest, where rebel-held areas host some 2 million Syrians, would provoke massive destruction and displacement. A deal between Turkey and Russia that sees Ankara deploy forces along front lines and Moscow deter a regime attack appears the only way to avert such an offensive.

States across the Sahel are struggling with intercommunal conflicts, jihadist violence and fighting over smuggling routes. Their leaders’ predation often makes matters worse. In 2012, the Malian army’s rout from the north and a coup showed how quickly things can unravel. Since then, instability has spread from the north to Mali’s central region as well as to Niger and Burkina Faso. Over the past year, alarm at mounting insecurity has prompted an increasingly militarized response, with a French-backed African force, the G5 Sahel, deploying into a field already crowded by France’s counterterrorism operations, US Special Forces and UN peacekeepers. The G5 force risks stirring up a hornets’ nest unless accompanied by efforts to win over local populations and defuse local disputes.

8. Democratic Republic of the Congo

Over 2017, President Joseph Kabila’s continued rule worsened the DRC’s political crisis and a humanitarian emergency that is now one of the world’s worst. The Saint Sylvester December 2016 agreement appeared to offer a way out by requiring elections by the end of 2017, after which Kabila would leave power. His regime backtracked, exploiting the opposition’s disarray and waning international attention; in November 2017, electoral authorities announced a vote at the end of 2018. Despite unrest in many provinces, the regime maintains the initiative. It may push toward elections in 2018; a presidential spokesman recently said the Kabila would not seek election, but he may still be keeping options open. The risk of further deterioration or even a descent into chaos remains.

The conflict in Eastern Ukraine has claimed over 10,000 lives and wreaked enormous humanitarian suffering. Implementation of the Minsk II peace deal has stalled. Both sides exchange fire across the line dividing Ukrainian from separatist and Russian forces. Yet the east is only part of the story. President Petro Poroshenko has struggled against systemic corruption. Ukrainians are losing faith in institutions, elites and the Minsk agreement, which many see as a concession to separatists. Russia’s September 2017 draft of a UN Security Council resolution proposing peacekeepers for Ukraine could be an opportunity. While the lightly armed force envisaged would more likely freeze the conflict than resolve it, Moscow’s proposal opens a window for Kiev and its Western allies to explore how peacekeepers might help.

Venezuela took yet another turn for the worse in 2017, as President Nicolás Maduro’s government ran the country further into the ground while strengthening its political grip. Expect the humanitarian crisis to deepen in 2018 as GDP continues to contract. In November, Venezuela defaulted on part of its international debt; sanctions will make debt restructuring nigh impossible. Food shortages, a collapsed health system and spiraling violent crime are perpetuating the conditions for unrest. Expect the humanitarian crisis to deepen as GDP contracts. A presidential vote, due in 2018, appears unlikely to offer a way out. The weak Venezuelan state will continue providing opportunities for money laundering, drug trafficking and people smuggling, further disquieting Venezuela’s neighbors already facing an exodus of Venezuelans. Only sustained domestic and international pressure – as well as immunity guarantees – could push the government toward compromise.

ROBERT MALLEY
is president and CEO of the International Crisis Group.

Why Europe must assert itself 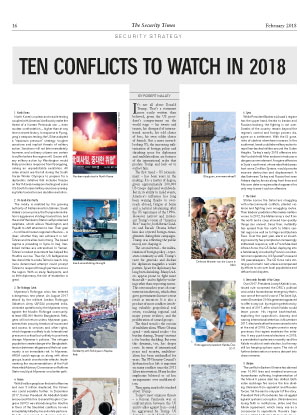