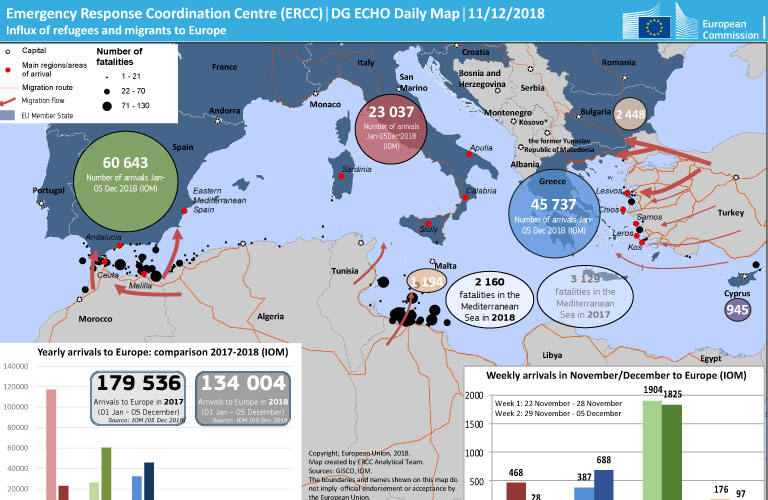 A growing security threat at Europe’s southern borders has remained unacknowledged for almost a century. It has never been conceived in military terms and, I believe, rightfully so. But it has been depoliticized as merely a matter of economic expediency – the intake, first, of a cheap and much needed low-skilled labor force and, then, of a vital demographic to rejuvenate the Old Continent’s faltering social security systems, “retirement fodder” in cynical shorthand. Since the late 1990s, it has been dealt with, haphazardly, as a humanitarian issue. Moralpolitik has rivaled Realpolitik, a dichotomy that has further deepened the rift between Europe’s cosmopolitan elites and populist sentiments, if not nativist resentment, among its citizens.

The security threat is Africa’s “scramble for Europe.” Since the 1930s, when Africa’s demographic fortunes underwent a sea change – from stagnation in the longue durée, and even depletion during the centuries of slave trade, to the fastest population growth ever experienced in human history – Europe’s southern neighbor has grown into a giant. While Africa had only about 150 million inhabitants between the two World Wars, its population rose to 300 million by 1960 – the UN’s “Year of Africa,” when 17 former colonies on the continent became independent – and doubled again by the end of the Cold War to reach 600 million by 1990. The population of Africa is now 1.3 billion.

Over the next 30 years, Africa’s population will almost double again, according to UN projections that expect it to reach 2.4 billion by 2050, a figure 17 times higher than in the 1930s. By comparison, Western Europe’s population – which stood at roughly 300 million in the 1930s and now stands at 510 million – has only grown by a factor of 1.7, or one-tenth that of Africa.

In 1885, at the conclusion of the Conference of Berlin, which established the rules for the colonial partition of sub-Saharan Africa, Europe’s scientific prowess, industrialization and modern armies made it the most developed continent in the world; Europe counted some 275 million inhabitants, not including Russia. Africa, with 6.5 times the surface area, had less than 200 million inhabitants and was the least developed continent in the world.

Relatively isolated by the Sahara Desert (a landmass as vast as the continental United States), uncooperative trade winds and the scourge of malaria – “the most formidable guardian of Africa’s secrets,” according to the Arab explorer Ibn Battuta – Africa’s interior had barely been mapped. But at a time when the aspiration “to reign on earth” was taken literally, when Christianity and the Enlightenment cult of progress were ardently proselytized, when other continents were already conquered and previously closed countries like Japan had been forcibly opened to free trade, it would have taken a minor miracle for Africa to escape European domination.

It would be equally astonishing if Europe were not acutely concerned today with the next massive south-north migration rippling across the globe from the less developed regions of the world. Between 1960 and 2000, south-to-north flows rapidly accelerated, with the total number of migrants tripling from 20 to 60 million. Except for the Maghreb, whose inhabitants left almost exclusively for France, Africa had so far played only a minor role in these migratory waves, which emanated mostly from Asia and South America. Sub-Saharan Africa was still too poor and marginalized to play a part.

And it is still relatively poor. In 1960, a little more than half its population lived in absolute poverty; today that figure has been nearly halved, according to the World Bank. Yet at the same time, the population south of the Sahara has not only more than quadrupled, it is also more and more in step with the rest of the world, to which it is now connected by satellite television stations, mobile telephones and broadband technology. Today, half of the continent’s population has access to 4G telephony and the internet.

And, finally, emerging from Africa’s sea of poverty is a real middle class. Some 150 million of the continent’s inhabitants now have a disposable daily income equal to anywhere from $5 to $20. Not far behind are another 200 million people who make between $2 and $5 a day. In short, a growing number of Africans are in the global information loop and can muster the resources to seek their fortune elsewhere.

This is a crucial point and the most likely reason for Europe’s long-time inattentiveness to Africa’s spectacular population growth. In the past, war, hunger and state failure in Africa did not cause massive numbers of its inhabitants to migrate north, and demographic growth on the continent did not translate into demographic pressures exerted on Europe. But, as Jeremy Harding adumbrated in his 2012 book Border Vigils. Keeping Migrants Out of the Rich World, “the first glimmerings of prosperity may well inspire higher numbers of Africans to come to Europe.”

Why? The poorest of the poor cannot afford to migrate. They are too busy making ends meet. At the other extreme, which often coincides with the other end of the world, the well-heeled travel frequently, to the point of believing that neither distance nor borders are of any consequence. Their freedom of movement blunts their desire to settle elsewhere. That is not the case for those who have narrowly escaped bare life and wish to live in the lands of seemingly unconfined opportunity. “Rising Africa,” a demographic billionaire and soon multi-billionaire, is rapidly scaling up its migratory potential. While yesterday it lacked the wherewithal to leave, today its population is approaching the threshold of a prosperity that will set it on the road to the European “paradise.”

Will Africa become Europe’s Mexico? Before the 1970s, only a tiny fraction of Mexicans could scrape together the means to cross the Rio Grande and settle in the United States. But as their country crossed a threshold into relative prosperity, more and more Mexicans decided to depart. Between 1975 and 2014, close to 12 million Mexicans migrated to the US. In all, including their children born in the US, Mexican-Americans now constitute a community of 37 million people, about 11 percent of the total US population.

If Africans followed that example, the Afro-optimistic leitmotiv of “Africa Rising” would become a reality. At the end of a sustained African migratory wave, Europe’s population would include some 150 to 200 million African-Europeans, both immigrants and their children, compared with just nine million today.

History is never written ahead of time – past events can be grossly misleading, or misinterpreted, while different demographic projections as well as the magnitude, duration and destinations of future migratory patterns can vary significantly. Comparisons with Mexico are also less apt because Africa is not a single country neighboring Europe, and the Mediterranean is a decidedly more redoubtable body of water to cross than the Rio Grande.

On the other hand, in 1975, the population of America was 3.5 times that of Mexico’s then 60 million inhabitants, while today it is still 2.5 times larger, although the Mexican population has more than doubled. The current demographic imbalance between Africa’s 1.3 billion people and the EU’s 510 million will grow much starker: by 2050, the ratio will be almost five to one. And the contrast will be even more striking in terms of age structure, i.e. the shape of the age pyramids. Today, four out of ten Africans are under the age of 15, twice as many as in the EU, where the median age is 43. As the population of Europe continues to age, sub-Saharan Africa’s demographic will continue to trend in the opposite direction.

By 2050, seven out of ten Africans will be under 30 while the median age in Europe will approach 50. Put differently, in a little more than 30 years, for every European in their fifties, there will be three Africans, two of whom will be in the prime of life.

It is sometimes pointed out that most African migrants – 68 percent in 2017 – remain on their continent; they leave their country of birth only to move to another, more prosperous African state.

This is correct. However, 40 years ago nine migrants out of ten stayed on their continent, while the percentage of Africans crossing international borders to establish themselves elsewhere was not only smaller but also a smaller proportion of a much more modest overall population. This is to say that the number of Africans migrating overseas is bound to rise significantly, and most of them will be headed for Europe, which is not only the nearest region of prosperity – twenty times wealthier than Africa per capita – but also the world’s citadel of social security. Every other dollar spent on social security on this planet is spent by Europeans, though their share of the world population has dropped to 7 percent.

There is no need to fantasize about “revenge colonization” or, for that matter, any other sinister master plan for Africa’s scramble for Europe. If you come from a dysfunctional country and you have managed to escape the poverty trap, if you are looking for more security and better life chances for yourself and affordable education and a brighter future for your children, Europe is your best chance.

The choices ordinary Africans make do not constitute a threat for Europe as long as these young migrants move to the Old Continent to live there as Europeans, or African-Europeans, and not as members of an African “diaspora” – and as long as Europeans are convinced that the final say on “who is let in” rests with them. Both conditions have become a matter of public dispute. But even if they were fulfilled, Africa’s migration would still represent a major challenge for Europe, as its pace rapidly accelerates over the decades that lie ahead and Europeans start to realize not only the shape of things to come but also the changes that have already taken place. They are trying to come to grips with the “Africanization” of their continent. Back in 1950, even colonial metropoles such as the United Kingdom and France had only a few African immigrants living on their soil, less than 20,000. This has since dramatically changed, and so far in fairly undramatic ways. For reasons that include demagoguery in addition to Europe’s economic stagnation and doubt about its sense of direction, the balance of this assessment might easily tip toward fear. If so, the prospect of “more Africans” will be perceived as a threat to homeland security.

STEPHEN SMITH
is professor of African studies at Duke University and the author of The Scramble for Europe – Young Africa On Its Way To The Old Continent, which will be published in April by Polity Books.

Journalists in conflict zones are increasingly targeted for their work. Media outlets must take ownership of their responsibilities 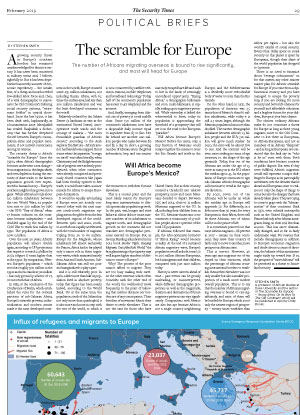