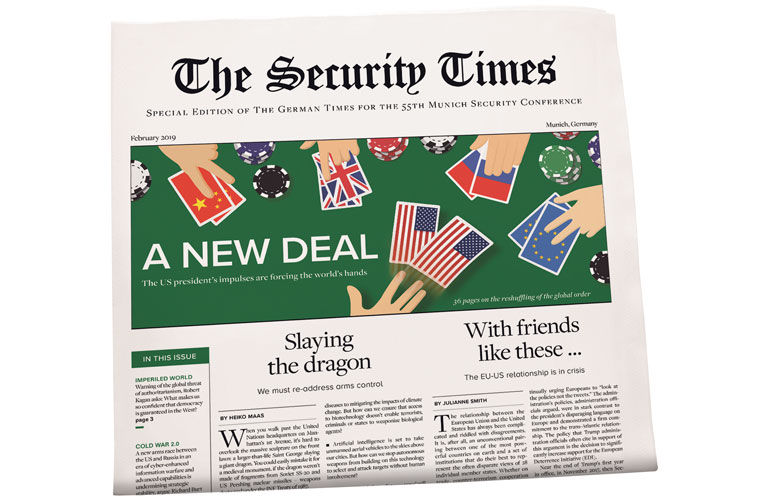 Munich, 14 Feb. 2019 – As international policymakers consider today’s conflicts and crises, their discussions are again being expertly accompanied by a special edition of the English language newspaper The Security Times.

For more than ten years, The Security Times published by Berlin-based Times Media has been a media partner of the MSC, and become a leading international platform for debating strategic security issues. The current issue focuses on fears of a new nuclear arms race and the decay of global governance, the effects on security of new technologies, the future of transatlantic ties and relations with Russia.

Alongside an array of opinion makers on international security policy, in an article for The Security Times German Foreign Minister Heiko Maas announces an international conference planned for mid-March on the threats posed by technologies including 5G, AI, hypersonic missiles and biotech and their manageability.

The European Commissioner for the Security Union Sir Julian King calls on Europe to prioritize its digital resilience, which is essential for shielding government information and industrial research, as well as elections, democratic institutions and our personal data.
Richard Burt laments the new US-Russian arms race. The chief US negotiator at the START disarmament talks with the Soviet Union hopes the two sides return to the negotiating table before the event of a catastrophic mistake. The renowned Berlin historian Herfried Münkler explains why so many wars of today’s wars have no end. Violence, Münkler argues, has transitioned from a political instrument into an economic resource. In further contributions, Russian historian Alexey Gromyko and German SPD lawmakers Rolf Mützenich and Achim Post call for an end to sanctions against Russia and new formats for Russian-European talks.
The Security Times is published for a readership of global opinion makers. It is a presence at the MSC itself in Munich and during the year at various MSC events. As a controlled circulation publication and alongside its sister paper The German Times, it is addressed directly to leading individuals as well as important institutions and corporations in Germany, the US, Europe and Asia. The newspaper is available online at www.security-times-com and also present on Twitter: @Sec_Times; https://twitter.com/Sec_Times.

The real cyber threat is your likes